Democrats should be afraid, very afraid 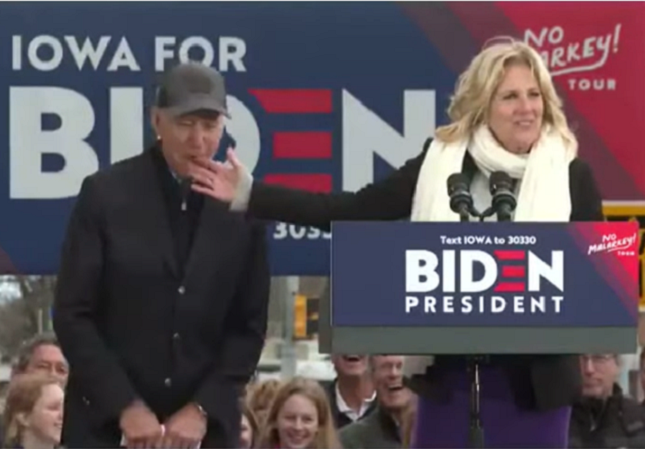 Former Vice President and current 2020 Democrat candidate for president Joe Biden (DE) has a long history of gaffes, making questionable statements, being handsy and creepy, and generally being a bit of a buffoon.

Earlier this week, while on his new “No Malarkey” campaign blitz bus tour across Iowa, he couldn’t remember the names of any of the women he claims to be considering for Vice President. And he topped off the week by chomping on his wife’s fingers at a campaign event.

.@JoeBiden's "No Malarkey!" Iowa bus tour starts in Council Bluffs with laughs: An excited @DrBiden gestures and almost hits Joe in the head…and then he bit her finger: pic.twitter.com/CIhHS9buJQ

A jovial Joe Biden nipped his wife Jill’s finger onstage Saturday at a rally in Council Bluffs, Iowa, as she introduced him at the first stop of an eight-day, 800-mile road trip through the first-to-caucus state.

As Jill Biden flung an arm wide to make a point, her husband theatrically dodged her hand — then, on a second pass, gave her a playful chomp on her fingertip.

She took the nibble in stride, laughing along with a crowd of about 200 supporters.

This was followed by an old video resurfacing of him waxing weird in 2017 about how much he enjoys kids touching his hairy legs and jumping on his lap.

It’s real, but it has to be seen to be believed.

This can’t be real life…

Joe Biden seems to be making headlines for all the wrong reasons these days. First, he bit his wife’s finger for some reason while she was giving a speech. On Sunday, an old video clip of him is making the rounds on social media.

This was, PJ Media reports, at “the same event he shared his infamous ‘Corn Pop’ story from June 26, 2017.”  You can view the full video here.

What in the heck is Biden talking about.

This is truly embarrassing and Biden is oblivious to it. https://t.co/F6s28NXysg

He’s the “electable” one . . . and the left wonders why we call the Democrat primaries a clown show.

The election of Biden would truly be a watershed moment in American history. (Cue the Oracle of Delphi).

Why do so many women who go out and campaign sound so stilted and phony? Jill sounds like Hillary. And Creepy Joe really should be kept away from children, and if I were a parent of young children, I would certainly always step between them and this creepy old man. What he does is border line grooming techniques that predators use to get their way with children.

My take is that she’s as desperate to get into the WH as he; Number One Observatory Circle not good enough for her. She’d get to be First Lady and all that comes with it. She might even take up Jackie’s pill box hats.

Leftists routinely refer to her as Dr. Jill Biden, implying that she’s a medical doctor. But that’s all part of a rather large deception; she’s not a real doctor. Her pretentious claim to that title is based on an EdD in “educational leadership” (gag)) is nothing less than a variant of Stolen Valor (ask Don Shipley about that and phony SEALs). Glammed-Up* Jill is claiming a status to which she’s not entitled. Real doctors = MDs, dentists, holders of PhDs in the hard sciences. Not real doctors = anyone with an EdD or a PhD in any soft studies programs (especially all those “studies” programs (gag-gag = womyns, black, gay, gender, education)) are exercises in bullshiitte-ology. Word-processing programs have enabled turgid writers** to become even more turgid.***

*Glammed-Up Jill is an accurate descriptor; she’s all show, no substance. Like Joe. Because of her looks (God-given, not the result of her efforts) she tried her hand at modeling (deep, meaningful stuff, you understand), indicating that style and looks are all-important to her. This would explain why Joe has become all-Hollywood (the hair plugs, the chi-chi clothing, the teeth, the Botox, the aviator sunglasses, the Amani shirts with two undone buttons).

***And if ya really wanna feast on the turgid, get yourself a copy of “The Things That Matter In Life: The Collected Words of Dr. Jill Biden” (there’s that Dr Jill Biden undeserved title again). Amazingly, some publisher actually put money in such drivel. But it doesn’t end there. This air head has now (2019) written an autobiography, Where the Light Enters: Building a Family, Discovering Myself.

Does the self-adulation of these people ever end?

And since she pats herself on the back for “Building a Family” it’s only fair for us to look upon her step-mother work in building Hunter’s character. Old Joe had a hand in that one as well.

As First Lady she’d be the most powerful education grifter in the country and would be set for life with lucrative consulting and NGO gigs.

The “Dr. Jill Biden” thing always makes me laugh a little inside. It’s so ridiculous and such obvious puffery that I can’t help but giggle every single time I hear / read it.

Those children are wondering just who this pillar of salt is.

OK. That can’t be real, can it?
Please tell me that’s one of those funny voice over videos, that we don’t have a Presidential candidate that likes kids touching his hairy legs and sitting on his lap. Please.

My Mom’s last Christmas was spent in a secure hospital ward for Dementia patients. She had gone from a smart, artistic Mennonite wife. Through momentary confusion, to frequent lack of lucidity, and on to full-blown violent crazy. It took about 5 years.

She was dead by spring.

Any of us who have watched the progression of Dementia know what’s likely happening to Joe Biden. And if it is what it appears to be, the downward spiral gets steep from here.

Joe needs to stay home with his Visiting Angels caregivers.

Humans are basically lizards with a big telencephalon to keep the lizard reflexes in check. But when the telencephalon starts to degenerate, those reflexes become unchecked and thus afflicted people are subject to a profound loss of mental and physical inhibitions. Triggering is very real to them. This is just a sign that old Joe can’t be taken out in public anymore

Well, Joe may be a feckless, fumbling fool but he is twice the man that Sheldon Whitehouse has ever been and he doesn’t even no where Rhode Island is.

A whole new version of his nick name – joe biteme !

Did I hear that right? Did Joe Biden compare a bunch of blacks kids to roaches and on video?

I’m honestly not sure what he meant by that, it was most weird. Having watched and cringed through the whole video (link also in the OP), I think the roaches thing had something to do with . . . ugh, I give up. The roaches thing seems to come from nowhere. The whole thing is just embarrassing.

This loon was the nation’s number two man for two terms. We were exceptionally fortunate that Barry remained healthy.

I saw a version where right before he mentions roaches a cockroach quickly scurries down his right shoulder. I don’t know if he saw it as it dropped off of him or if someone in the crowd mentioned it. My guess is he saw it as it jumped from his body. Either way, joe biden isn’t fit to be POTUS and not only because he is losing his faculties. Decades in office and his most significant “accomplishment” is enriching him and his family. Pure swamp creature.

“I love kids jumping in my lap”.

That one almost made me spit out my drink!

I remember another Democratic candidate (a precinct captain) who also loved kids jumping in his lap.
https://en.wikipedia.org/wiki/John_Wayne_Gacy

I don’t mean to imply any similarity between Biden and Gacy. There’s not any similarity. That’s just who the statement about kids jumping into his lap reminded me of.

Quid pro Joe. Decaffeinated Joe. Say it ain’t so. A protege or client of the no longer viable pedophile Epstein?

“Democrats should be afraid, very afraid”

Are you kidding? Those are exactly the sort of character-defining traits Dems go out of their way to vote for. They embrace such clowns.

The Democratic self immolation has gone from grease fire to dumpster fire to bonfire to firestorm. It seems ready to go nuclear.

Creepy Joe is living up to his nickname.

It will be a MAL-archy!

If Biden wins the nomination then Trump should investigate and prosecute him for bribery ie Burisma. It should be a slam dunk as he received a bribe (job for son) for forcing Ukraine to fire the prosecutor who was investigating Burisma.

Biden’s crazy act is partly a scam: he is becoming panicked about his, pelosi’s, kerry’s, Obama and Clinton’s part in the Ukraine US foreign aid kickbacks.

Aside from a thief, biden is also a pervert. What does that make Jill biden? Is she to biden what Hillary Clinton is to rapo bill?

Maybe his best tactic would be to capitalize on this wacky senile streak, and make it work for him rather than against him. Do something weirdly photogenic, like bite the head off a bat and spit it out toward the reporters. His second best bet may be to drop dead but stay in the race. America has a history of electing dead people; perhaps the voters admire their determination and staying power (or, in today’s political argot, “persistence”).

Many people will vote to give that senile old fart the nuclear codes. That’s scary.

So while campaigning to be President, Biden thought it was of national interest that he has hairy legs, and he loves kids bouncing on his lap. Doesn’t sound like a real policy winner.

Is it just me or, does everyone else see Jeff Dunhams character, Walter, whenever they see pics of Creepy Uncle Joe. If the Dems hadn’t gotten rid of the country’s long-term psychiatric facilities, Biden would have been in a rubber room long ago.

The Commiecrats should be afraid, very afraid because they are going to Loose again to Trump.