Republican Businesswoman to Challenge AOC in 2020: “There’s a crisis in Queens and it’s called AOC”

Republican Businesswoman to Challenge AOC in 2020: “There’s a crisis in Queens and it’s called AOC” 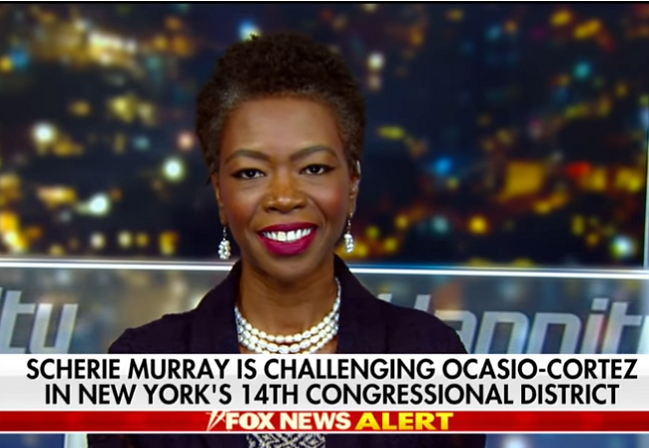 Rep. Alexandria Ocasio-Cortez (D-NY) is not popular.  She’s not popular in swing states, in her own state, nor even in her own district.  The illusion of popularity she has comes from her Twitter following and a currently enamored leftstream media.  But that kind of reputation is tenuous at best because that’s the kind of faux popularity that can go as quickly as it comes (ask Wendy Davis and Sandra Fluke. And “Beto.”).

AOC is ripe for a challenge from her right, from someone whom those in her home district might trust. AOC is also someone who doesn’t talk about jobs and other “kitchen table” issues that matter to her constituents.

Enter Scherie Murray, a Republican, a New York businesswoman, and an immigrant from Jamaica.

There’s a crisis in Queens and it’s called AOC. She isn’t worried about us – she’s worried about being famous. That’s why I’m running for Congress. Join our movement to #unitethefight ➡️ https://t.co/rtqGz0XeAw

In less than 24 hours, one woman garnered national attention as she announced her bid to unseat Rep. Alexandria Ocasio-Cortez in 2020. Her name is Scherie Murray.

. . . .  Murray immigrated to the United States from Jamaica when she was nine years old. She grew up in Southeast Queens.

Murray worked as a systems analyst for the New York City MTA Bus Depot while completing her associates degree in computer science and a bachelor of science in broadcast journalism.

She is also a businesswoman. She started a company with a mission to address the lack of minorities in media. The company is called The Esemel Group.

With her experience in business and local Republican politics, Murray is running on a platform to #UnitetheFight. Her first official campaign video, entitled “Bridges,” has also drawn attention to her message of unity over partisanship.

Murray’s focus is on the people from New York’s 14th, the district for which she is challenging AOC.  She speaks about jobs and about issues that she believes AOC is neglecting in her self-promotion and grandstanding.

A businesswoman and immigrant from Jamaica hoping to unseat freshman Rep. Alexandria Ocasio-Cortez, D-N.Y. told Fox News’ Sean Hannity Wednesday that she wants her New York City neighbors to have a representative in Congress who speaks to the issues of her district.

“I’d like to represent the constituents in Queens and the Bronx,” Scherie Murray said.

“We see AOC, from the time she’s been elected, she’s put out policies like the job-killing Green New Deal,” she added. “She then went on to kill the Amazon deal in New York, which would’ve put some 25,000 jobs in Queens.”

New York’s 14th Congressional district — which includes the eastern Bronx and the northern part of Queens — has local issues that need the attention of a federal representative, Murray claimed.

“Our subway is crumbling. Our roads are in need of repair,” she said. “We need to really tackle our education system.”

“I think the narrative on the national level needs to be dialed back, and that’s why I’m in the race.”

In a separate interview with Fox Business‘ Stuart Varney, Murray expanded on her comments about Trump and the Squad, about comprehensive immigration reform, and about her potential as a fusion candidate.

Send her ass back to the bar

HBow? She’s not a lawyer…

She was a bartender.

“The launch of a “republican” political challenger in NY-14 to challenge Alexandria Ocasio-Cortez, Sherie Murray, follows a very familiar political ploy…. A fake candidate intended to protect AOC in 2020. In June of 2018 Sherie Murray was an avid AOC supporter.”

“In the last 36 hours you may have seen “republican” candidate Sherie Murray promoted, seemingly out of nowhere, by a variety of media platforms (social media and traditional). However, when there is an obviously coordinated effort to push a rapid high visibility roll-out; and that effort is for a singular congressional district; it is always worth doing some background research.”

Even if she turns out to be a fraud, she unseats AOC and cannot possibly be worse. Let the voters in Queens decide. They know more about this than anyone.

The other Republicans would have “sparked interest” if Hannity had had them on his show. Hannity picked Murray over them. Why? During that short segment there was no real discussion of her record or platform, no reason why she would be more worthy than the others.

Perhaps. On the one hand: Mia Love turned out to be an open borders shill who played the race card against Trump, and Murray may be another Love.

OTOH: it is possible Murray is genuine in her opposition to AOC.

The gripping hand is that anyone who is elected in AOC’s congressional district will probably be fairly left of center (that includes Murray, if she wins). This is unlike the more conservative Republican-friendly Utah district Love won (and then blundered into losing).

I dunno… Sundance may be jumping the gun or may have some other ulterior motive for his rush to judgement.

It was not time consuming at all nor the least bit difficult to tell that she is not terribly prolific on Twitter, so just a few seconds of hitting “Page Dn” on the keyboard and scrolling down her Twitter feed got me to six years ago and 2013 pretty darn quickly and I just randomly stopped there. Upon review of her Twitter feed starting at the bottom of where I randomly stopped in 2013 and working my way up, she seems pretty solidly Republican and pretty solidly for moving the Black vote to conservative candidates and away from Democrats. Searching up her Twitter feed with keywords like “Republican” and “conservative”, her bonafides, on Twitter anyway, seem pretty darn legit to me.

She may have been congratulating her future foe, AOC, as a gesture of goodwill or some such – and/or perhaps fumbled her wording, only she knows for sure I ‘spose – but that tweet is still up and has not been removed so it’s not like she’s trying to hide anything. Taken on the whole, her twitter feed is definitely pro-conservative and pro-Republican.

I’ve seen Scherie in a few televised interviews. She has a great message, but she needs a media coach.

I’m waiting for AOC to be primaried.

This is the more likely end to AOC

The Dem primary is the only way AOC is removed from office….A Republican challenger in that district is very fishy.

THIS! There is zero chance that district is electing a Republican. Has to be a Democrat primary challenge.
I’m secretly hoping that AOC goes after Schumer’s Senate seat heh heh.. that would be awesome.

She would have to RINO real hard to win that crazy district and even then I don’t think she could.

The illusion of popularity she has comes from her Twitter following

I know of a good number of people who follow her for the comedic value.

For the same dark reason people slow down and look when passing a traffic accident….

She started a company with a mission to address the lack of minorities in media.

. . . local issues that need the attention of a federal representative, Murray claimed.

“Our subway is crumbling. Our roads are in need of repair,” she said. “We need to really tackle our education system.”

Call in the Feds to address an admittedly local problem. Uh-huh.

This is no Republican.

She folded the media “company” to work on “raising her children.”

Question: how did she support herself?

Not a credible challenger to AOC. Nope. This woman has tweets supporting AOC when she was running in ’18. No way GOP picks up a seat in Manhattan. That’s laughable.

Obviously no true “deplorable” will be elected in that district so here’s a serious question for the group. Which of these is preferable:

2) AOC defeated by Dem-e like the guy she replaced

3) AOC stays so Dems can be tarred with her radicalism

I think (3) is most preferable (I do sort of hate that she’d get a lifetime pension if reelected but oh well) but I think the D party is aiming at (2), the least preferable.

Chakrabarti was throwing the Squad under the bus right before Trump stopped all that with his “send them back” tweet, and that’s why I think Trump made the tweet, to force the Dems not to dump the Squad.

I expect the Dems to try again to run to the center. They’ve just made their fall presidential candidate debates just like their summer ones, with 20 candidates and keeping almost all the original ones, like they’re starting over from scratch. They probably have time to do this, although not any more times after this.

Fox News truly is controlled opposition at best or CNN in disguise.

Beware…. She at one time supported AOC!!

Buyer Beware – AOC Challenger Candidate Launch Has Familiarity….
BEWARE – Having watched this type of political scheme for several years; and accepting people for what they do, not what they claim to be; in my opinion Murray is likely in place to protect AOC in the 2020 race. This perspective is bolstered by how the launch/roll-out was also timed and scheduled by Fox News.
https://theconservativetreehouse.com/2019/07/18/buyer-beware-aoc-challenger-candidate-launch-has-familiarity/

“She is also a businesswoman. She started a company with a mission to address the lack of minorities in media.”

Not really the ideal sort of businesswoman to my way of thinking. What sort of business is that? Does she sell a product or service in the competitive market to willing buyers? I would likely prefer one of the other Republicans who has declared.

I think the successful candidate will be one who can primary AOC in the Democratic race. Is the Dem party resisting that idea?

My how this woman has changed her position so quickly. Just last June Ms. Murray tweeted the following: