Congresswoman Ocasio-Cortez might be a hit among the fringe left, but polling indicates she’s alienating voters and Democrats.

Favorability by the numbers: 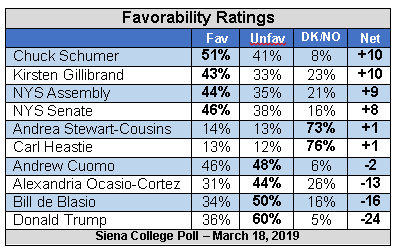 Worse still (for AOC), 2/3 of respondents strongly support the Amazon HQ deal that Ocasio-Cortez actively fought against, and say Amazon’s decision not to build a large facility in Queens is bad for New York:

Loudonville, NY. By a 67-21 percent margin, New Yorkers say that Amazon cancelling its planned second headquarters in Queens was bad for New York. By as nearly as large a margin, 61-30 percent, they support the deal in which Amazon would receive up to $3 billion in state and city incentives and create up to 25,000 jobs if Amazon reconsiders, according to a new Siena College poll of New York State registered voters released today.

AOC’s petulance has made her a thorn in the side of Speaker Pelosi, who has lost control over the younger, extremist wing of the party. But this is the generation progressives designed and fostered, an issue that’s looking seriously problematic heading into election season:

She’s fond of saying Republicans are afraid of her, but GOP loves how she’s defining Dems. Actually, it’s a growing number of Democrats who see her as a liability. https://t.co/dGLtYqmFEo

suburban and upstate Dems are more conservative, but still predominantly on the liberal-to-moderate spectrum.

Sign of how AOC brand of progressivism is a really tough sell — outside the bluest of precincts.

ow! That has got to hurt!

She is too dumb and arrogant to get this.

She is, ironically, green. Perhaps time will see fit to inform her.

What does she care? It’s the (pick one or more) patriarchy, racists, anyone who hates broccoli, anyone less crazy than her, etc., etc.,…..”I can name that tune in one note” (actually happened).

No matter how low her poll ratings go AOC is still fave-rave in Hollywood, the media, and college campuses. So while the old fogey Soviet Central Committee (Pelosi & Co) detests her she still enjoys the unqualified support of the New Khmer Rouge.

For that reason there is almost no chance she will be replaced. Democrat leaders will back down.

Marxist/Maoist revolutionies are impatient folk. Pelosi best bend a knee, and soon, or the red guard will struggle her in public.

In reference to Ben Adler’s “defense”: Here you have a journalist looking for the thinnest of defenses against an undeniably bad poll result in the politician’s home state. I wonder how often that happens on the other side of the political aisle.

As long as the shill media can talk ABOUT her, people view her favorably.

The more people are exposed to the ACTUAL PERSON, the lower their favorability goes.

Clearly White State-ists. That is a political reenactment of diversity.

AOC was recruited by radicals in the Justice Democrats. You can see how popular their agenda is and really to get this unpopular this fast means their whole movement is doomed or the Democrat party is and I bet someone in the Establishment Democrat party decides they are done.

Can we saw NYC off from the rest of the state and push it out to the Atlantic?
Look at the upchuck and kristen numbers. I see no hope for that state. And de blah blah is over 30%, NYC voters are making aoc look intelligent if they’re that happy with de blah blah.

It’s all the Orange Man’s fault (assisted by Fox News)!