President Donald Trump hit his highest approval rating in the Gallup poll at 46% thanks in large part to a surge of support from Democrats. Polling was taken from April 17-30.

Trumps jump in approval comes on the heels of Special Counsel Robert Mueller’s report that said Trump and his campaign did not collude with Russia. The strong economy probably helped as well.

The Gallup poll is on par with other recent polls: Harris/Harvard has him at 46%, Rasmussen at 50%, RealClearPolitics at 44%. 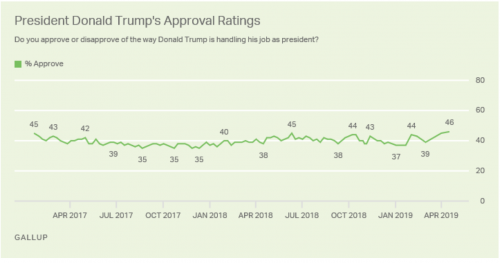 Even CNN admitted Trump’s rise in popularity as Chris Cillizza penned an article titled, “Donald Trump is more popular than ever.”

Cillizza made an interesting point (emphasis mine):

Dig into the numbers and you see something very interesting. Trump’s gains of late are not, as you might expect, from Republicans. Nine in 10 Republicans backed Trump in March, the same number who did so in April. It’s among Democrats where Trump’s job approval has improved the most month-to-month; just 4% approved of the job he was doing in March compared to 10% who said the same in April. Independents went from 33% job approval for Trump in March to 39% in April. 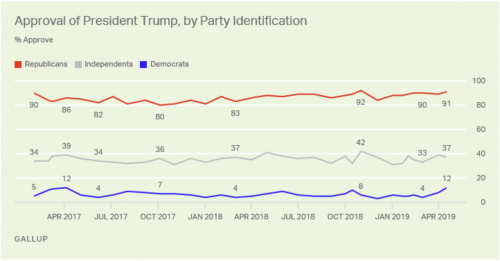 Take a look at independents where Trump’s approval rose 4 points. Yesterday I blogged about an NBC News/Wall Street Journal poll that discovered more independents have strayed away from the Democrats after those people sided with the left since 2010 in the 2018 elections. The poll also found 38% of independents have a positive view of Trump.

In the Monday’s poll, 45% of the independents do not agree with impeachment hearings on Trump. Only 19% want them.

I agree with Allah Pundit at Hot Air. Trump’s numbers may continue to rise since the May jobs report only came out last week.

Allah Pundit also remarked that Trump’s Gallup poll numbers on day 830 of his presidency. He provided this graphic: 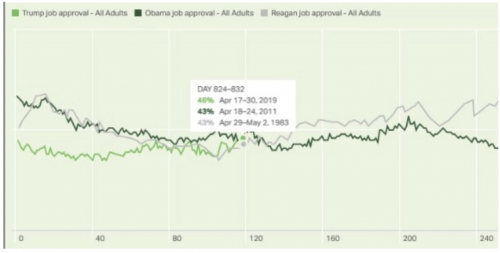 Trump is the light green line, Obama the dark green line, Reagan the gray line. At the end of April in the third year of their presidencies, the comparison stands at 46/43/43, respectively. Trump’s actually ahead of two two-term presidents at this point — although there are caveats. First, Reagan’s numbers had been hurt by the recession of 1982. At this moment in his presidency he was on a long climb out of that hole. Second, the end of April 2011 was just before Obama announced the killing of Osama Bin Laden, which briefly sent him back up past 50 percent. This comparison wouldn’t work in Trump’s favor a week from now. And third, Reagan and Obama had each enjoyed majority approval earlier in their presidency (and each would go on to do so again). Trump never has.

Barack Obama had nonstop positive news coverage from the media.

President Trump has nonstop negative news coverage from the media.

I will repeat myself. These numbers could very well be what is swaying Speaker of the House Nancy Pelosi to not even want to talk about impeachment hearings, let alone begin them.

Pelosi called the idea of impeachment hearings divisive. She knows the hearings could potentially harm the Democrats chance at unseating Trump and harming their chances of holding onto the House.

White House Chief of Staff Mick Mulvaney said last week, “People will vote for somebody they don’t like if they think it’s good for them.”

I guess he read Salena Zito’s great book The Great Revolt. She traveled through the backwoods of America, off the trails of interstates to interview Americans largely ignored by other outlets. A lot of them don’t like Trump’s behavior, but they still voted for him because they thought he provided them the best chance to have a steady job and keep more money in their pockets.

The latest jobs report proved just that. Companies created more and more jobs, unemployment is at a 50 year low, and disposable income increased.

Finally putting the clamp on importing cheap slave labor from India from body shops that undercut US tech wages. MSFT, Google, FB and others complain they can’t find qualified US candidates while they drive wages down to levels equivalent or lower than blue collar trade jobs.

This is very interesting because NumbersUSA is making very unhappy noises about Trump lately.

Is that run by the Democrat Party Owned Big Tech Monsters?

I may just buy a MAGA hat and take my chances with the clothing fascists.

Crazy Pelosi has been the gift that keeps giving.

But for that imbicile John Roberts and that rat John McCain, her Enabling Act that is obamacare would be gone.

The Democrats — in their coming out of the Collectivist closet pursuit of a Green (instead of Red) utopia of CO2 eating unicorns and rainbow electrical generation — left behind (pun intended) their own mantra: “It’s the economy, stupid.”