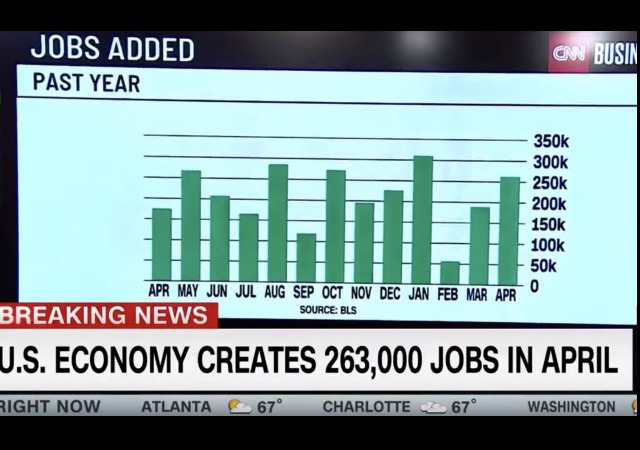 President Donald Trump has another stellar job report under his belt. Economists predicted 190,000 jobs in April, but the report shows the month added 263,000 jobs while the unemployment rate went down to 3.6%. 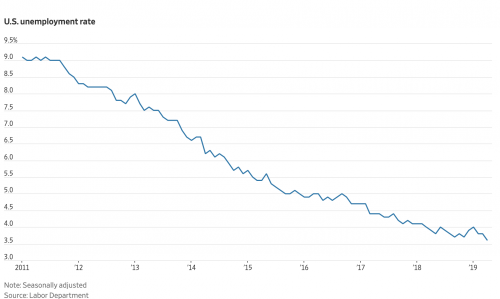 Look at that graph. You know what that tells me? If failed presidential candidate Hillary Clinton ran on the economy instead of social justice she may have stood a chance. Thing is, the economy wasn’t bad under President Barack Obama.

I continue to stress that the majority of Americans care mostly about their wallets. They want a steady job and money in order to provide for themselves and their family. That is the main priority.

If the economy keeps this up, Trump will have a victory in 2020.

The boost in jobs came from massive hiring “in professional business services, construction and health care.” Retail saw a drop in hiring “for the third straight month.” Manufacturing jobs remain bleak as that sector only added 4,000 jobs in April.

Onto unemployment! From The Wall Street Journal (emphasis mine):

The unemployment rate fell in part because the number of Americans in the labor force shrank by almost 500,000 in April. The fraction of Americans with jobs or actively looking for work fell to 62.8% in April from 63% the prior month. The rate had slowly crept higher from a multidecade low of 62.4% touched in 2015. The rate remains below prerecession levels, suggesting the economy has more capacity to draw in workers.

Friday’s report showed a broader measure of unemployment, including those too discouraged to look for work, plus Americans stuck in part-time jobs but who want to work full time, held steady at 7.3% in April. The rate is slightly higher than it was in 2000, even though the headline unemployment rate is lower. That suggests additional workers may yet be available to fill a near-record number of job openings.

In previous cycles, by the time the unemployment rate neared 4%, the number of Americans on the edge of the labor market had also significantly shrunk—and wage growth accelerated more dramatically, said Marianne Wanamaker, a labor economist at the University of Tennessee. There is evidence that those ranks have yet to thin in the current labor market.

Those who stay on unemployment went down to 9.4 weeks in April.

The unemployment rate looks even better since the “broader measures of unemployment declined in April.” The broadest measure, though, has not changed since February: part-time workers looking for full-time jobs. This held at 7.3%.

Unemployment for people with less than a high school education dropped “to 5.4% in April from 5.9% in March.” Those with a high school diploma “saw their unemployment rate drop, to 3.5% from 3.7%.”

However, April’s weekly wage growth slowed a tad and topped off at 2.9%. It’s the first time since January 2018 that weekly wages growth went under 3%. One analyst said we shouldn’t worry about this just yet.

US Hourly Earnings up 3.2% in the past year outpacing core inflation (YoY) for 77th consecutive month. Spread of 1.2% above inflation is highest level of expansion. #payrolls pic.twitter.com/VoZF2ID8XY

While some may groan about slow wage growth, I don’t mind it because it slows down inflation. The wage growth has not shown a change in prices from companies “as average raises exceed price increases.”

So, in other words, people can enjoy a little more in their paycheck while us consumers don’t have to worry about a rise in prices.

Yup, after Nov. 8th, 2016, unemployment went down hillary fast thanks to Trump!

They like to give Obama credit for economic upturn. That didnt happen until Trump won the election. Lowering gas prices is the major reason. When Chavez seized the oil fields gas prices went through the roof killing budgets across the board. Obama shot down Anwar and most drilling that gw approved. Making it a long lasting problem. It was a stupid thing to do from a stupid person.

I assume this goes up against the conspiracy theory that Obama purposely tanked the economy himself.

Occam’s Razor demands that Obama purposely tanked the economy himself.

Trump admin continues to destroy the socialist fantasies of the left, quarter by quarter.

notamemberofanyorganizedpolicital in reply to healthguyfsu. | May 3, 2019 at 4:59 pm

And we’re going to leave them “no quarter.”

“Thing is, the economy wasn’t bad under President Barack Obama.”

Republicans were able to successfully neuter him for most of his terms. All except that frustrating 2 years where he rammed through his legacy of garbage known as Obamacare.

Watch out for the swamp to attempt to torpedo the economy as a means of preventing a second Trump term. Don’t underestimate their ability to do so.

This can’t be true. The MSM isn’t reporting it. S/O

I have friends who *insist* that the last two+ years of record economic growth are all Obama, and that it takes years for policy to turn into progress. They can’t understand that stock market growth and hiring are based on predictions, not history. “Last year had great profit but next year is going to really suck so let’s hire a bunch of people” said no manager, ever.

My opinion: When the economy started to cycle down in 2008 and the market saw just what bozo was going to get elected, it went down far harder than expectations as people bailed way before November. The first two years of his term only showed how foolish it was to jump right back in when the Dems held the legislative and executive branches. The slow progress after was a long slope of investors saying “our economy stinks, but everybody else’s stinks worse, so…”

Honestly, I thought Nov 2016 was where the outgoing administration would spike the market, yank quantitative easing, and see just how bad it could smear the incoming Trump admin with a crash. I guess they were too busy planning for a Hillary admin to come in.

If you have “friends” that supported Obama, you need to lose them and find some new friends.

Where, oh where, is the econo-drama (“new norm”) of Obama?

Where, oh where, are the good old days of Carter malaise?

Those cagey capitalists are at it again!

Why, we’ll even sell Obama, Hilary and all their Dem leaders the rope for their gallows……….

Trump is forcing people to work so his government can take tax money away from them and their families.

I shoulda been a classically trained professional journalist.

I’ve seen this argued in a slightly different way by leftists….

I’ve literally seen a lefist state that unemployment is down, SNAP payments are down, and LFPR is up because Trump is forcing people to work that used to collect these benefits.

I have no problem with the statement, and I think and hope it is true. I take issue with the fact that the statement was actually posited as a negative against Trump by a leftist.

190,000 vs 263,000…..It looks like the only folks who should be afraid of losing their jobs are the agenda-driven prognosticators who missed this so badly. Weathermen can now rest easy, being so much better at predictions than these clowns.

I clearly remember almost all of Obama’s numbers eventually getting revised downward…and now most of President Trumps numbers are being revised upward. Too bad for the lefties and never-Trumpers.

I hope things stay good through 2020 so we do not go full marxist.

But it is folly to look at govt. numbers and accept everything at face value because govt numbers lie and things are not always what they seem. There is reason for concern. First, look beyond the shallow and superficial reports to the details, such as the U-6 unemployment number and the people out of the workforce. Second, the central banks have been pumping up the world economy with monetary alchemy consisting of printing money, lending it to banks, and artificially low interest rates. Third, govts throughout the world have been spending money like crazy and the spending is financed by debt and supported by central banks printing and pumping money. Fourth, the world is awash in debt, including all layers of govt on and the private sector at corporate and household level. All that spending and money printing coupled with demand for commodities and goods in emerging economies like China and India are a devaluation and inflation double play. Nations cannot spend their way into prosperity and just print money under the new “modern Monetary Theory”. All that consumer debt in the US is going to impair consumer consumption, with student loan debt being one prime example. Next, the economic data does not look so good when one delves into them: international shipping demand and rates; the trade deficit and export levels; home starts; domestic orders for new trucks and trailers; purchasing manager index; business owners’ sentiment and estimate of probability of a recession within the next 12-18 months, etc.

More on what may lie beneath the surface:

notamemberofanyorganizedpolicital in reply to OleDirtyBarrister. | May 3, 2019 at 5:05 pm

Methinks the Zerohedge fund writer forgot to mention that those were Democrat “small” “business” owners….

….where the such as the MSM affiliate’s, Democrat advisors, Democrat pollsters, etc.

Liawatha is pulling out her hair now. Yeah the one who came up with the brlliant phrase You did not build that.

And it just gets better!

“Thing is, the economy wasn’t bad under President Barack Obama.”

I’d beg to differ. There wasn’t a week, sometimes even daily, where the Obama and his Administration was threatening coercion, regulation, or litigation against businesses, investors, and entrepreneurs into compliance. That held back the Main Street economy that is now coming back with Trump.

I don’t give Obama an ounce of credit beyond helping Wall Street Leftists get richer. (Because that where the money that helps elect Democrats-socialists comes from.)

Another grand Obama scheme which was a waste of money. Cash for clunkers. The deliberate killing off of the used car industry.It is now just recovering from the devastation of forcing the car dearerships to scrap their trade ins.

How many of the new jobs go to native born Americans? Our betters are still replacing us at every turn. Even that mean old Trump wants lots of legal immigrants great big beautiful gates in his big beautiful wall.