If you don’t want people to call you out, don’t tweet out anti-Semitic garbage. 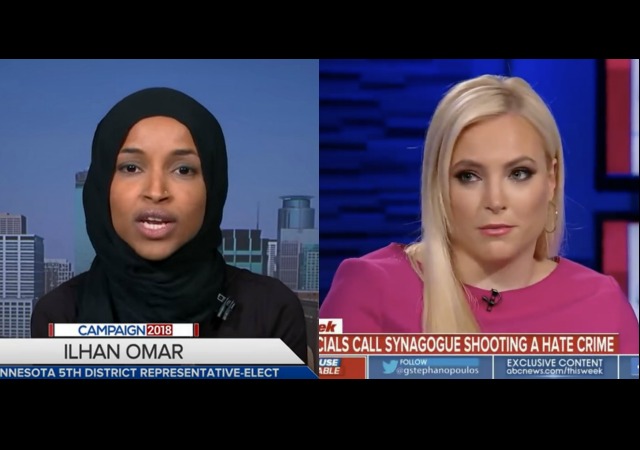 After 19-year-old John Earnest opened fire on the Chabad of Pomway in California, the anti-Semitism that has plagued America came to the forefront.

The View co-host Meghan McCain pushed back against both sides when it comes to anti-Semitism, but she rightfully pointed out Minnesota Democrat Rep. Ilhan Omar’s anti-Semitism.

Omar took a shot at McCain this morning by tweeting, “Oh, bless her heart!” Us in the south know exactly what Southerners mean when they use that phrase.

“When we’re having conversations about antisemitism, we should be looking at the most extreme on both sides,” McCain said after a right-wing terrorist shot up the Poway synagogue, killing one and injuring multiple other worshippers. “And I would bring up Congresswoman Omar and some of her comments that got so much attention.”

“In my opinion, Nancy Pelosi wasn’t hard enough in her response to [Omar] trafficking in antisemitic language, talking about ‘it’s all about the Benjamins’ and how Jewish people had hypnotized the world,” McCain added, before also calling out President Donald Trump‘s repeated defenses of the white nationalist Charlottesville rally in 2017 and saying, “We’re talking about it on both sides of the aisle.”

Omar responded after a woman named Sophie Ellman-Golan, who belongs to the Women’s March and boasts how she’s “dismantling white supremacist patriarchy,” bashed McCain for supposedly blaming Omar for the shooting. 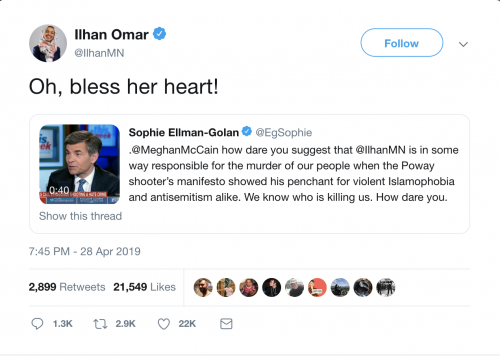 It doesn’t sound like McCain specifically blamed Omar for the shooting. She reminded people Omar has tweeted a lot of anti-Semitic language.

Thing is, we should always call out anti-Semitism, Islamaphobia, and all hatred towards all faiths.

I don’t like how she pushed the false narrative that President Donald Trump defended the white nationalists in Charlottesville, VA. We have proven this wrong many times.

McCain called out Speaker Nancy Pelosi because she hasn’t done enough to condemn the anti-Semitism that has seeped out of the Democratic Party. After Omar’s Jewish money tweet, the House voted on a resolution to condemn hate, but refused to name Omar. Then again, Pelosi appeared on a Rolling Stone cover with Omar.

Anyway, in case Omar needs a reminder, we have kept track not only of her anti-Semitic remarks, but bashing of Christianity.

Thing is, McCain received criticism from leftists for bringing up Omar in the interview.

Jewish friends—how do you feel about Meghan McCain using a deadly terrorist attack by a white supremacist & anti-Muslim bigot, as an excuse to attack Rep Ilhan Omar? pic.twitter.com/Ml3bK15FZ6

Our people are dying and Meghan McCain continues to pretend Ilhan Omar is to blame. It’s horrifying and dangerous, and McCain needs to be held to account. https://t.co/caNUYOWuiC

Meghan McCain is part of the movement radicalizing young white men to murder Jews and Muslims. If she wants to help, she can denounce anti-immigrant conspiracy mongering and then dedicate her life to gun control.

I’d compare Meghan McCain’s level of tone-deafness to Logan Paul, but even Logan Paul was smart enough to not equate Rep. Ilhan Omar to “the most extreme” antisemitism in the country right now. pic.twitter.com/wADK0pIUWT

Here is a novel idea. How about not tweeting anti-Semitic garbage?

McCain’s as big a douchebag as Biden.

I have no respect for her. She rarely gets things right.

She’s finally right about something.

But then, when you have the likes of boehner, romney, mccain, ryan, mcconnell, flake, corker, murkowski etc. as your bulwark against tyranny, you have quite a crappy army.

Ilhan Omar and her cohorts seem to be serving the purpose of provocateur and cultural instructor, wanting to pick a fight so she can claim persecution and teach ‘society’ that Islam is dominate.

AOC seems to be using the same tactic. The ‘Rights Movement’ of the liberal left are experts at this teaching technique as exampled by BLM blocking roads then demanding people stop and listen to their insane claims.

They do that all the time with their “women.”

Just notice out in public after the next “special Democrat Party’s protected victims'” terrorist attack, how suddenly you see all their women out in very public spaces wearing their native costumes…..

“Don’t they (Christians) know that Jesus was a Palestinian?”
—Ace of Spades

Made up Roman Empire Fake Name to insult the Jewish Nation is where that made up fake word came from.

As Alan Dershowitz has said, the difference between left and right on this is that the center-right strongly condemns far-right anti-Semitism while the center-left makes excuses for far-left anti-Semitism.

And look also to the center-right’s support of Israel vs. the center-left’s much more favorable view of the Palestinian argument.

Dershowitz, as a center-leftist, still buys into the idea that White Nationalism is on the far right rather than the far left or outside the left-right paradigm altogether. There is antisemitism on the right, but these people aren’t part of it because they have nothing that places them on the right. The only reason people do is that it suits the left to have them there. Actual right-wing antisemitism is rather minor nowadays, though it used to be significant. Pat Buchanan. James Baker. A very few others. Nothing like what it is and has always been on the left.

I agree. Today’s Right can’t even compete with the Left (thankfully) when it comes to breadth and depth of anti-Semitism.

The left seems to be breeding a variation of “when did you start beating your wife” in their attacks.

Their new flavor is “How dare you say…(insert something you didn’t say, but fits their narrative of repugnant and deplorable) and I fully condemn your statements that you never said in the first place, cuz I’m a righteous do-gooder. All hail those who are enlightened and follow me and my party for all others are evil.”

MSM and social media sycophants broadcast like clockwork the lie to eager and hungry consumers of their narrative and never suffer any hit in credibility from said audience. To the contrary they are outrage peddlers. The 24/7 news machine is simply an outrage dopamine machine whereby consumers have an IV of propaganda that will tickle their addiction to self righteous indignation. Meth, Crack, Heroin have nothing on this drug when it comes to addiction and damage to society.

Listen, if anyone here cannot see exactly where we are: you are blinded by living through history, instead of reading about it after it has happened.

Mainstream in America:
-a guy born in Kenya is eligible to be president; worse, he passes himself off as ‘barack hussein obama’
-“Goddamn America”: obama’s preacher for 20 years
-“Proud of My Country’ for the First Time”: Fat Mike obama.
-“I am a communist”: obama advisor Van Jones
-“Mao is my poltiical hero”: obama advisor and biden advisor anita dunn
-“We need a civilian security force as strong as our military”: barack obamam
-every American college campus has an anti-Semitic organization fully protected by the leftist maniacs running the school
-obama is buddies with anti-Semite Farrahkan
-obama’s press secretary has posters of communist russia proudly hanging in his home
-harvard admits and graduates a cypher student (obama)
-harvard admits a dumbass who no qualifications other than promoting hate of America (Camera Hogg)
-the complete corruption of America’s news and entertainment media
-the first coup attempt in American history is attempted
-the horror of rashilda tlaib
-the horror of illhan omar
-the maligant joke that is Obnoxio-Cortez
-the New York Times prints Nazi-era propaganda as Times opinion
-EVERY democrat candidate running for president in 2020 is a proven corrupt fascist, if not ridiculously incompetent

Here we are. We’re no different than any other people who have lived in the beginnings of a fascist takeover of their nation.

The enemy is the leftist media and corrupted universities: the incubation chamber and dissemination machine for the left. They need to be destroyed: vote with your pocketbooks – be disciplined about it.

Meghan who? It’s hard to be interesting when nobody gives a damn, or less.

Anyone who aids in perpetuating and propagating the utterly contrived and fallacious mythology of Muslim victimhood, in the U.S., or, anywhere else, deserves total scorn and condemnation. As does the odious and vile bigot, Ilhan Omar, who seems to gleefully revel in the total immunity from criticism that her skin pigmentation, Muslim status and African ethnicity have conferred upon her, in Dhimmi-crat eyes.

If you read accounts of the White House Correspondents Dinner, the media is taking a page from the Muslims’ playbook and portraying themselves as victims.