Bernie’s running again, will try to out-Socialist the other Dems

Bernie’s running again, will try to out-Socialist the other Dems

Other Democrat candidates are running towards Socialism, but Bernie’s been there, done that.

“I wanted to let the people of the state of Vermont know about this first,” Sanders told VPR’s Bob Kinzel. “And what I promise to do is, as I go around the country, is to take the values that all of us in Vermont are proud of — a belief in justice, in community, in grassroots politics, in town meetings — that’s what I’m going to carry all over this country.”

Sanders said he is running to oppose President Donald Trump, and to enact many of the progressive ideas — including universal health care coverage, a $15 minimum wage and reducing student debt — that he championed in 2016.

“I think the current occupant of the White House is an embarrassment to our country,” Sanders said. “I think he is a pathological liar… I also think he is a racist, a sexist, a homophobe, a xenophobe, somebody who is gaining cheap political points by trying to pick on minorities, often undocumented immigrants.”

Sanders knows he will have a different primary than he did in 2016 when he only had to challenge failed Democrat presidential candidate Hillary Clinton. Well, not only did he have to challenge her, but the whole DNC. Emails showed how the DNC actively worked to squash the grassroots movement in support of Sanders to prop up Hillary.

This time around Sanders already has a handful of Democrats to challenge in the primary and the number will probably only climb:

Sanders said his campaign hopes to enlist one million people in a “grassroots movement of people prepared to stand up and fight.”

Sanders acknowledged he will encounter a “very different campaign,” than in 2016, when he emerged as the sole serious challenger to former Secretary of State Hillary Clinton and won 23 primaries and caucuses.

A diverse Democratic field includes more than a dozen candidates who have either formally declared or expressed serious interest. The challengers include five of Sanders’ colleagues in the U.S. Senate — Cory Booker, Kirsten Gillibrand, Kamala Harris, Amy Klobuchar and Elizabeth Warren.

While Sanders won’t have to deal with Hillary (yet, of course. The failure still may jump into the race), the race contains those four women along with Rep. Tulsi Gubbard of Hawaii. We know the Democrat party remains obsessed with minorities and try to challenge the white male patriarchy.

Will the DNC learn its lesson? While it wants to prop up women and other minorities, polls have shown Sanders and former Vice President Joe Biden as the top choices among voters.

The latest Morning Consult poll shows Biden with the lead at 29% and Sanders in second place with 22%. The others fall drastically behind those two old white men. 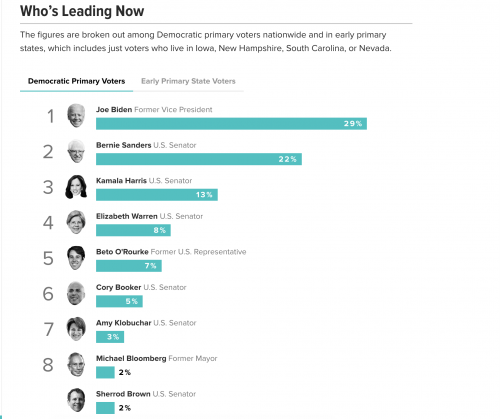 A Monmouth University poll in January also had Biden at 29%, but Sanders placed second with 16% and Harris in third with 11%.

How stupid do you have to be to sign up for DNC to screw you again!

Bernie’s Millionaire Bank Account is “more” Red than he is.
Well….except for his moment at the SOTU. HA!

Bernie running for President… he must need another house.

Bernie Sandernista is off and running!

Bernie should show all socialists the way to Nirvana and write a big fat check to the US Treasury giving the government his total net worth. But don’t wait for it, because it isn’t going to happen. And don’t wait for his wife to fix the financial mess she made at the now defunct Burlington College.

The D’Rats seem to be suffering from an extremely powerful mental disorder caused by their total, simultaneous psychological absorption of three delusional conditions: Trump Delusion Syndrome, the Socialism Utopian Fallacy, and the always popular D’Rat condition, Megalomania. Its effects are similar to why you should never mix drinks and an assortment of drugs. It has reached the point where the D’Rats see everything through a totally a distorting filter of this overwhelming mental disability, which thrusts them into a state of constant paranoia and projection. They cannot function together in any formerly cooperative social environment, say the once-uncontroversial, amiably liquor and drug sodden, college “learning” environment, without it bursting into an irrational mob of mass hysteria, wherein odd behaviors, such as Red Hat Phobia and the horrifying Apocalyptic Delusion of Climatic Collapse by Cow Flatulence are manifest and totally accepted. I do not hazard to think that if one of their shoelaces become undone, it was another MAGA Plot, and is another clear reason to impeach the Arch-Anti-Marx Trump. So sit back and enjoy a great D’Rat primary season, string nooses around the neck optional.

“I think he is a pathological liar… I also think he is a racist, a sexist, a homophobe, a xenophobe, somebody who is gaining cheap political points by trying to pick on minorities, often undocumented immigrants.”

We can always count on a few things, and Bernie’s grip on the real world is one of them. So, obviously, he’s counting on the Children’s Crusade to put him in, rather than adults with coherent thought processes. But no matter, the DNC will do whatever it takes to sabotage him. If the D’rats are about anything, it’s control. Control of you, control of me, but most importantly control of the candidate. (Besides, of course, money. The D’rats will never stray far from the money.) The sky will fall before they’ll run someone who isn’t even a Democrat.

“I think he is a pathological liar… I also think he is a racist, a sexist, a homophobe, a xenophobe, somebody who is gaining cheap political points by trying to pick on minorities, often undocumented immigrants.”

Yet another example of the Democrats’ lack of self-awareness.

A short path to being done with Bernie would be to sell Vermont to Canada.

Sorry, the Clintons already sold it to Russia.

If Bernie gets the nomination, then I’d like to see Ben Shapiro run against him.

Dude never actually had a full-time job in his life until he became mayor of Burlington in his 40s. He’s completely alienated from the real world.

Zombie-Bern — the lifelong government apparatchik, who never held a private sector job of any substance, for any substantive length of time, wants to run the country into the ground, fulfilling the Left’s dark, totalitarian vision of equality of misery, poverty and oppression, for all members of the proletariat.

On another note — Bern doesn’t understand the contemporary Dumb-o-crat Party’s values. He hits all the wrong notes, where the Dumb-o-crats are concerned — white, male, Jewish — all verbotten traits, according to the Dumb-o-crats.

If Comrade Sanders undergoes a very public conversion to the ideology of “Submission,” and, becomes Bernie al-Brooklyni (or, al-Vermonti), then, he MAY have a shot at the nomination, given that Muslims rank near the top of the latest Dumb-o-crat “victim” hierarchy charts.

Is it too soon to bring up the “Shirtless in Moscow” video ?

How does he out-Socialist Warren or Booker? Plus he has neither an approved skin tone or approved genital configuration.