According to a new USA Today/Suffolk poll, Democrats and independents have little enthusiasm for the rising stars within the Democratic Party or a few of seasoned veterans except for former Vice President Joe Biden and Sen. Bernie Sanders (I-VT). 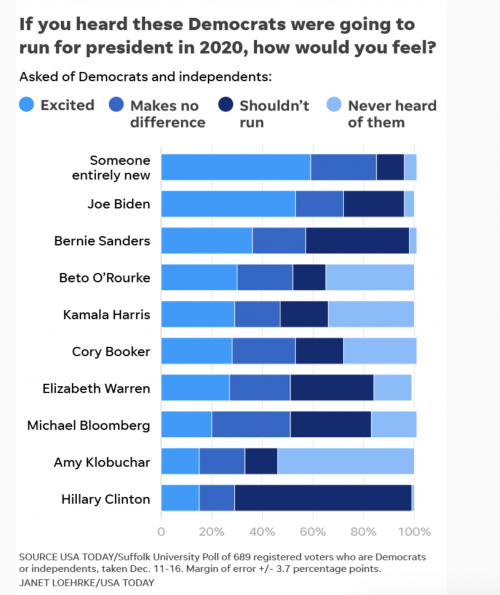 I find the results kind of weird because it looks like the majority are excited for someone entirely new, but the top two people are Biden and Sanders:

“He [Biden] has the common touch,” said Thomas Maslany, 72, a Democratic retiree from Perkiomenville, Pennsylvania, who worked for the Environmental Protection Agency. He thought Democrats might need to nominate an older white male to defeat President Trump for re-election, although he agreed the party needs to move to a new generation of leaders. “The world’s changing so fast.”

Catherine O’Connor, 63, an artist and a political independent from Lockport, New York, had an idea how to reconcile those conflicting impulses: nominate Biden for president and choose someone like California Sen. Kamala Harris or Texas Rep. Beto O’Rourke as his running mate.

While she mentioned O’Rourke, she also worried that the three-term House member, who lost his bid for the Senate last month, and other newcomers, lack enough experience for the Oval Office.

Despite the media gushing over him, many have not heard of Rep. Robert O’Rourke (D-TX). I doubt we will ever forget how much the media fawned over O’Rourke and thought he could beat Sen. Ted Cruz (R-TX).

Me, I find it ex-Hillarating!

Dear Lord, PLEASE let Mike Obama be the Democrat Candidate! Just think of all the fun and popcorn we could have watching Mike dance around denying rumors and explaining why the School Lunch program was so well-loved by students.

“He [Biden] has the common touch,” said Thomas Maslany

That’s one of StickyFingers Biden’s bigger problems . . . his touch is commonly all over the underage girls.

She’s younger, clueless, and just smart enough to be able to recite talking points. Expect a major construction effort on behalf of the Dems to make her saint-like and brilliant in time for 2020.

This poll merely shows hat most folks really don’t pay attention to politics at all.

In 2004, John Kerry trailed the pack but recovered and won the nomination. Ditto John McCain in 2008. Polls like these are fun, but provide no real insight into the eventual nominee. Besides, Obama’s wife isn’t even on the list, nor is Howard Schultz.

From the crypt, perhaps.

I’d be excited about having Biden run. He is a walking gaffe machine, and would be a wonderful punching bag for someone as acerbic as Trump.

How interesting. The smart, progressive Democrats would choose Biden. I guess they are not what they think they are after all, because Biden is certainly not smart or progressive.