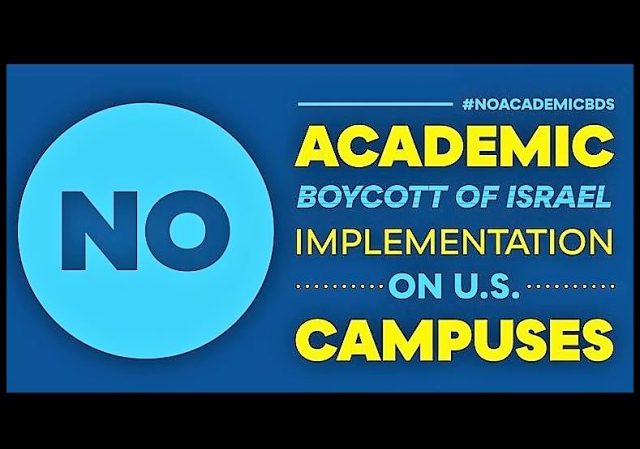 In December 2013, the American Studies Associations passed an academic boycott of Israel, part of the international Boycott Divestment and Sanctions (BDS) movement.

The ASA boycott, which is the subject of ongoing litigation, was undertaken by anti-Israel faculty who methodically took over key ASA committees and National Council. Though only about 20% of the ASA membership voted for the boycott, that was enough given low participation rates in the voting.

Systematic academic boycotts are considered contrary to academic freedom according to the American Association of University Professors.

The effort proved successful beyond our expectations.

Within a short period of time the effort gained such momentum that I was receiving unsolicited communications from university and college administrators asking to be added to the list. In all, over 250 university and college presidents, plus numerous university associations, condemned the ASA action. Our List of Universities rejecting academic boycott of Israel (Update – 250!) became the most widely cited compilation of such condemnations.

This outpouring of condemnation resulted in even the NY Times describing ASA as a “pariah”:

Since then there have been repeated efforts to move the academic boycott to larger academic organizations, without success. But the anti-Israel activist professors keep trying.

In the past year there have been new tactics employed by anti-Israel faculty. Since collective action at the university organizational level have mostly failed, faculty are going rogue. We covered the example of two U. Michigan professors who refuse to write recommendations for students seeking to attend Israeli universities under U. Michigan approved programs. The faculty at Pitzer College in California recently voted to terminate study abroad programs in Israel.

These anti-Israel faculty are engaging in unethical behavior that damages students. The faculty are free to believe what they wish, and to boycott Israel themselves, but when they use the power they have over students by depriving students of educational opportunities based on faculty political views, they breach their positions of trust.

The AMCHA Initiative has organized a campaign calling on the 250 universities and colleges who condemned the ASA boycott to condemn the academic boycott of Israel and to take a pledge to uphold academic freedom for students. AMCHA is using the list we compiled:

Here is part of AMCHA’s Press Release announcing the effort:

Santa Cruz, CA, December 4 – In response to recent serious attempts by faculty at the University of Michigan and Pitzer College to thwart American students from studying in and about Israel, more than one hundred national and local organizations today called on the same 250 college and university leaders who in 2013 issued statements opposing the American Studies Association’s anti-Israel boycott to sign the “University Leaders Statement Against the Implementation of an Academic Boycott of Israel.”

The University Leaders Statement condemns “in the strongest terms” faculty who would attempt to implement an academic boycott of Israel on their campuses.

“Following the American Studies Association’s adoption of a resolution endorsing a boycott of Israeli universities in 2013, leaders of 250 U.S. colleges and universities, including your own, issued statements opposing the ASA resolution. However, in light of recent reprehensible attempts by faculty at University of Michigan, Pitzer College and elsewhere to implement an academic boycott that thwarts their own students’ academic freedom and their own colleagues’ scholarly activities, it is imperative that university leaders speak out once again, this time even more forcefully,” wrote the groups in the letter organized by AMCHA Initiative.

While long portrayed as an effort aimed at Israeli universities and scholars, the implementation of the Palestinian Campaign for the Academic and Cultural Boycott of Israel (PACBI) will directly violate the rights of, and harm, students and faculty on U.S. campuses.  Its tactics include having faculty on American campuses shut down their own school’s study abroad programs in Israel; refuse to write letters of recommendation for their own students who wish to study in Israel; scuttle their own colleagues’ research collaborations with Israeli universities and scholars; and cancel or shutdown student- and faculty-organized educational activities about Israel or featuring Israeli scholars or leaders to take place on their own campus.

Just as these 250 university leaders condemned the ASA resolution boycotting Israeli academic institutions, the groups are calling on them to publicly condemn any faculty members who would attempt to implement the academic boycott of Israel on their campus. The University Leaders Statement acknowledges that these tactics “will not only inflict serious harm on Israeli academic institutions, but on faculty and students at our own schools as well,” and it affirms that implementation of the academic boycott of Israel subverts the scholarly and educational opportunities and curtails the academic freedom of students and faculty on U.S. campuses. It also puts faculty on alert that behavior that treats students, “as collateral damage to a political agenda is wrong and violates the principles of collegiality and academic integrity central to our institutions,” and will not be tolerated.

This is the Statement university and college presidents are asked to sign:

Individual faculty members and students have the free speech right to declare their public approval of an academic boycott of Israel. However, we are concerned at the prospect of some individuals on our campuses actually proceeding to implement an academic boycott by complying with the 2014 guidelines of the Palestinian Academic and Cultural Boycott of Israel (PACBI). Implementing these guidelines will not only inflict serious harm on Israeli academic institutions, but on faculty and students at our own schools as well.

Among a wide range of recommended practices, PACBI guidelines specifically urge members of the academic community “to boycott and/or work towards the cancellation or annulment of events, activities, agreements, or projects involving Israeli academic institutes or that otherwise promote the normalization of Israel in the global academy…or violate the BDS guidelines.” Were faculty or students on our campuses to fully implement these guidelines, they would be engaging in activities that directly and substantively harm their own students and colleagues, including:

All of these actions to implement academic boycotts of Israel subvert the scholarly and educational opportunities or curtail the academic freedom of colleagues and students who are members of our own campus communities. Some of the actions above, along with other forms of personal assault, are carried out by students as well. Treating one’s own students or faculty colleagues as collateral damage to a political agenda is wrong and violates the principles of collegiality and academic integrity central to our institutions. We condemn such behavior in the strongest terms.

AMCHA has issued the following Alert providing links as to how people can contact university and college administrations (contact information here):

AMCHA also has an online Petition that can be signed.

It is very important that rogue and unethical faculty not be permitted to exploit their power to deprive students of educational opportunities in Israel.

The sickest people are teaching our children. The SICKEST.

How does this continue, in light of federal money being necessary for schools hiring these sickos to continue operating?

Make no mistake — this is one of the myriad manifestations of Leftists’ new, gleeful and unabashed anti-Semitism. And, although the Leftists will (and, are) protesting, mightily, that criticism of Israel is allegedly not tantamount to anti-Semitism, in current political and cultural contexts, it absolutely is. Not only because the Leftists are happy to promote fallacious and contrived “victim”-“oppressor” narratives that ignore facts, history and objective reality (e.g., the Arabs’ ceaseless jihadist belligerence against Israel), but, because no other country on Earth — certainly none of the myriad bastions of misogynist, anti-gay, anti-secular and totalitarian misery that are Islamic states around the world — are subject to the same vilification and propaganda as Israel.

Meanwhile, of course, Leftists are happy to promote the supremacist, totalitarian, misogynist, anti-gay, anti-Semitic, anti-secular and belligerent ideology of “Submission” at every turn, whitewashing its crimes and its history, as truly contemptible collaborators.

Great work, Prof. Keep it up!