Multi-year academic boycott effort ends in failure, but they will be back. 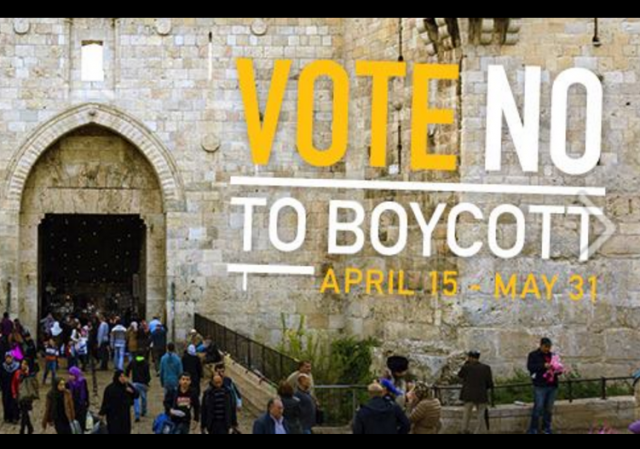 The American Anthropology Association (AAA) has announced that the resolution to boycott Israeli university put before the membership was narrowly defeated.

For our earlier coverage of the years-long effort of anti-Israel radical faculty to demonize and boycott Israel, see here, here, and here.

Anthropologists reject #BDS and academic boycott.
A historic vote at the @AmericanAnthro: https://t.co/YVCWvJpD7w

According to the announcment by the AAA leadership, the results were: 2,423 members opposed to boycott against 2,384 who voted in support. According to AAA, 51% of the membership voted (making this the “largest turnout in AAA history”).

While this vote was very close, it is worth noting that 49% of the membership didn’t vote at all. This means that had 39 votes gone the other way, barely a quarter of the membership of the AAA would have imposed this boycott on the other 75%, tarnishing their discipline, and its reputation, in the process and dragging  it into lawsuits. This shows the power of small radical groups to take over an organization and hijack it for its purposes.

Could it be that @AmericanAnthro members worried about taking org outside its chartered mission, inviting lawsuits? https://t.co/aXOvxmYWgz

On the other hand, given that 1,040 members already voted for BDS at the initial business meeting at the AAA annual meeting in Denver, which sent the motion to the general membership of the organization, these numbers suggest that nearly half (44%) of those who support were already physically present at that meeting. The BDS campaign seems to not have won over many converts since.

It is worth contrasting the overwhelming majority of pro-BDS votes at that meeting with the actual votes of the membership at large. Once again the highly mobilized nature of the BDS campaign creates a distorted perception of how popular BDS really is.

This is a stunning defeat for BDS activists who put all of their eggs in the AAA basket this year. Boycotters spent years planning this vote, including the highly biased and misleading Task-Force report, biased panels, packing the room at the AAA meeting in Denver, and a massive online campaign.

Yet, despite all of this, BDS activists barely expanded their constituency beyond those already agreeing with them at the Denver meeting.

A Battle of Organizations

Two organizations of Anthropologists, “Anthropologists for Dialogue on Israel and Palestine” and “Against Anthro-Boycott” led the effort in combating the resolution.

In their response to the news, titled “The Struggle Continues”, the Boycott campaign acknowledged spending three years on their campaign and reiterated that 1,300 anthropologists have committed to “pledging to uphold the boycott through their own personal practice”.

Then, in characteristic lack of irony and self-awareness, they complained about “outside organizations” that “poured enormous resources into derailing the boycott”.  While not all members of the BDS funding machine have been above board on their support, some well-funded outsiders, such as the Jewish Voices for Peace have:

Proud to know and support incredible activists and academics involved in this. We're behind your efforts 100% https://t.co/yAKzgqiiSM

As if to confirm the allegations of those who claim that the AAA leadership is biased against Israel, the AAA has indicated that, despite the boycott, it will proceed with an anti-Israeli statement and further similar actions (see here for further coverage).

While 51%  of those who voted rejected boycott, the AAA has decided to act as if they received a mandate from their membership to proceed with anti-Israeli activities. This too shows the bigger picture of the BDS strategy: it is not merely to boycott Israel. Rather, by focusing on whether or not to boycott, BDS moves the goalposts in a manner that condemnation of Israel is taken for granted.

In an interview with Insidehighered, AAA President Alisse Waterston stated this explicitly:

The consensus within the AAA remains and that is that there are serious human rights problems that exist in Israel/Palestine as a result of Israeli state policy, practices and the occupation and that AAA must take a course of action…

AAA said its executive board feels comfortable without a separate vote for the planned actions and noted that even the anti-boycott resolution (which was defeated at the Denver meeting) expressed “concerns about Israeli government policies and practices”.

There is disagreement around the academic boycott, but there is a general consensus on the rest…

The Road Ahead: Expect More of the Same

In any case, it would be a mistake to conclude from this that BDS activity is over. BDS activists have indicated that they wish to proceed with their long march through American academic associations.

Already, there is a movement to initiate a boycott resolution at the Modern Language Association (MLA) and at the Middle East Studies Association (and here). In Anthropology too, there is likely to be a campaign again. While one hopes that AAA has tired of this campaign for a while, given the obsession with casting Israel as a ‘settler-colonialist’ state on the part of many Anthropologists and the relentless (and well funded) activities of BDS activists, one must assume that this is far from over.

Still, there is room for encouragement. If Anthropology, one of the most politicized and anti-Israel, anti-American, and anti-Western academic associations, doesn’t sport a majority in favor of boycott, the prospects of BDS at other, more mainstream organizations, look bleak. That bleakness, perhaps, is hope for the rest of us.

The author is a graduate student who must write under a pseudonym for fear of retribution from pro-BDS faculty.

Bunch of book-burners in the making…

i think that it is time to do a reverse boycott and refuse accreditation to these mamzeirim. do not acknowledge them in any venuem as in klingon disacomodation.
https://www.youtube.com/watch?v=5c2etjMl3WM

BDS is focused on hijacking small, low-profile, nonpolitical organizations for its own purposes, and getting them to pass ultra vires actions, in order to pretend that there is actual support in America for the cause of murdering Jews.

I’m not into the murder of innocents, including Muslims and Mexicans, and yet our United States President seems to be overly willing to allow both.

Since the Palestine-Egypt border is sealed more tightly and more deadly than is the Israel border, and that the Egyptian forces don’t muck around with restraint or advance notices before retaliating to Palestinian violence in their direction, I always wonder where is the movement to boycott Egypt?