In blow to anti-Israel profs, lawsuit against American Studies Association over BDS to stay in federal court

In blow to anti-Israel profs, lawsuit against American Studies Association over BDS to stay in federal court

The American Studies Association (ASA) was the first, and so far the only, major American academic association to adopt the academic boycott of Israel, part of the Boycott, Divestment and Sanctions (BDS) call to isolate and cut ties with Israel and Israelis.

The fallout from the December 2013 ASA resolution was swift. The ASA action, which is considered a violation of academic freedom by the American Association of University Professors, was condemned by over 250 university presidents and numerous university associations.

ASA tried to exclude Israelis from its annual meeting in California, but the threat of legal action caused ASA to back down.

In April 2016, ASA and its leaders were sued in federal court in D.C. by other ASA members, claiming irregularities in the way ASA adopted the boycott, American Studies Association and its leaders sued over Israel boycott.

In late March 2017, a federal judge granted in part and denied in part a motion to dismiss the case, Judge: Lawsuit against American Studies Assoc over BDS can move forward. In November 2017, the plaintiffs sought to expand the lawsuit against ASA in an Amended Complaint. We reported on the attempt to expand the lawsuit at the time, Lawsuit: BDS movement engineered takeover of American Studies Association:

… on November 9, 2017, the plaintiffs filed a Motion to File a Second Amended Complaint (pdf.)(proposed complaint also available here), expanding not only the claims but also adding parties.

The Motion to Amend describes how the Second Amended Complaint, if the court grants permission to file it, would expand some of the claims:

This Court’s Memorandum Opinion of March 31, 2017 respecting defendants’ motion to dismiss the First Amended Complaint noted that the pleading contained “the idea that Individual Defendants hijacked the ASA for the improper purpose of turning it into a social justice organization,” but further noted that “[t]his alleged hijacking is not a discrete cause of action[.]” (Opinion at 29 n.8) The Proposed Second Amended Complaint pleads discrete counts and detailed factual allegations about how the USACBI Defendants, in furtherance of USACBI and their personal interests, gained and abused positions of trust within the ASA through deception and misrepresentation, and how, once in positions of leadership at the ASA, the Defendants orchestrated improperly manipulated the corporate machinery, violated the ASA Constitution and bylaws, and misappropriated the ASA’s assets to advance the USACBI agenda through the adoption of an academic boycott of Israel….

The Court  granted the motion to Amend, meaning the full scope of the boycott efforts and persons involved leading up to adoption of the BDS resolution were the subject of the lawsuit.

In its Memorandum Opinion (pdf.), the Court rejected arguments that the amendment would prejudice defendants or was made in bad faith. Significantly, the Court also found that amendment was not “futile”:

… Defendants appear to have taken a rather scattershot approach to arguing futility and have presented only bare-bones arguments with almost no legal authority for their various positions. Given the rather complex nature of this matter, the Court is not inclined to dismiss the proposed claims based purely on cursory arguments that lack clear rationale and legal authority…. Consequently, the Court will not address the Defendants’ futility arguments at this time; however, Defendants may re-raise these  objections in a well-supported motion to dismiss or motion for summary judgment. As a result of the foregoing, the Court finds that Plaintiffs should be granted leave to amend their Complaint.

In that ruling, however, the Court raised an issue the parties had not raised, whether the federal court had “subject matter” jurisdiction. What that means is that federal courts are courts of limited jurisdiction. You need to show either that there is a federal question involved in the case, or that there is diversity jurisdiction (none of the plaintiffs are citizens of the same state as any of the defendants) and there is at least $75,000 in controversy. Absent one of those types of jurisdiction, the court could not hear the case and it would have to be litigated in state or D.C. courts.

The Court stayed the litigation while it decided the issue of subject matter jurisdiction.

After several months, the Court finally ruled, and held that there was subject matter jurisdiction, so the case can be reactivated and continued in federal court: 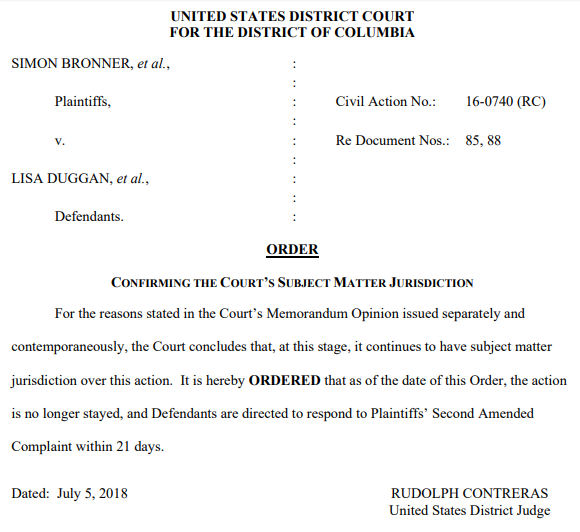 The Court’s Memorandum Opinion (pdf)(full embed at bottom of the post) goes into detail on the nuances of federal court jurisdiction. You nerds can read it in its entirety.

The Opinion, however, is important to the continued litigation because, in finding subject matter jurisdiction, the Court found that there were sufficient allegations of intentional conduct by the defendants to take them out of the protection of the District of Columbia (“D.C.”) Code § 29-406.31(d), which shields Directors of charitable organizations from damages under certain circumstances:

This Memorandum Opinion addresses a specific, narrow issue: The impact of District of Columbia (“D.C.”) Code § 29-406.31(d), which shields directors of charitable corporations from damages except in specific circumstances, on this Court’s subject matter jurisdiction.

D.C. Code § 29-406.31(d) is significant to the Court’s subject matter jurisdiction because that provision could immunize Defendants from the damages sought by Plaintiffs, and therefore make it legally impossible for the Plaintiffs to meet the amount-in-controversy requirement of 28 U.S.C. § 1332. The only damages that Plaintiffs seek in their Second Amended Complaint are “damages from the individual Defendants incurred by [the ASA].” See SAC ¶¶ 194, 197, 207, 215, 225; SAC at 82…..

Plaintiffs therefore cannot collect damages from the Individual Defendants—the only damages Plaintiffs seek—except in certain circumstances. If those circumstances are not met here, it would be legally impossible for Plaintiffs to recover $75,000 in this action…..

Defendants here not only allegedly subverted the ASA’s voting procedures, but also allegedly improperly diverted its resources and misled its members in service of a harmful purpose. Accordingly, Plaintiffs have alleged that Defendants’ conduct rises to the level of intent to harm the ASA, and therefore that Defendants are not shielded from damages by D.C. Code § 29-406.31(d)….

This ruling will come back to haunt the defendants because it has effectively removed a key legal defense from the litigation. Assuming the plaintiffs can provide evidence to back up the claims of intent, the defendants cannot rely on this D.C. provision in trying to get the case dismissed later on, before trial.

So, barring some other development, this case appears headed to trial, as well as further discovery as to how the individuals who ran and were influential in the anti-Israel boycott movement interacted with each other.

The litigation is already putting a strain on these key anti-Israel faculty members. I have obtained an email circulated on a National Lawyers Guild list in early June seeking legal help from several of the faculty members named in the Amended Complaint:

It’s very possible that they are already involved, but folks on this list should all be aware of Palestine Legal, which is dedicated to exactly this sort of work defending people speaking out in defense of Palestine. (I see they are involved in the SFSU case referenced here.) The founder and Director, Dima Khalidi, is an NLG member. Thank you to [name redacted] and everyone who is doing this incredibly important work. More info about Palestine Legal below from their website.

Hi Comrades,
I got an email from [name redacted] asking for help finding lawyers or law students to help with this case… see below. If you have more questions, please shoot him an email (and feel free to share this)
thanks,
[name redacted]

I’m writing on behalf of a couple of professors who are major advocates for justice for Palestine who have been sued by Ken Marcus’ old group at Brandeis.

We need help. I can do a lot of the management and supervision from here but I am already up to my eyeballs with another one of these cases I am doing pro bono and have put about 400 hours into it in the last 9 months, so I simply cannot do the heavy lifting on another one (in addition to the deportation defense work…) I need help recruiting either law students who can give a steady stream commitment, or some young lawyers willing to do stuff below bargain basement $200/hr rate.

If there is a prayer of a chance that you know of people who might be able to help, I’d be happy to fill you (or anyone else) in on the gory details.

We will continue to report on the litigation as it heads to trial.

I’m very happy to see academics start to push back on the hard left drift – or is it a dive? – of all things in the academe. Recently I saw separate interviews of Bret Weinstein and his wife Heather Heying and it gives me hope that liberals are trying to stop this hard left nonsense. Through in voices like Dershowitz and there is perhaps a chance that the hard left becomes ostracized and shunned enough to not matter. (Check out Dave Rubin’s interviews of each of them for example).

Of course, the result may be a sharp increase in violence. But I’m pretty sure we have sufficient prison space.

Good news – and the Court’s memorandum opinion is focused on a topic that few seem to understand well, even those with some legal training: Federal Diversity Jurisdiction, or, when must a case stay in Federal Court, and out of a State Court? Diversity Jurisdiction is what will guarantee that Kilmartins’s environmental suit in Rhode Island is going to be heard in Federal Court, not State Court, no matter what Kilmartin thinks about that. In the Rhode Island case, Kilmartin has filed suit against 21 major oil companies, not a single one of which is based in Rhode Island. Diversity, that goes to Federal Court, guaranteed.

The “professors” involved in this anti-Semitic anti-Israel lunacy are reprobates and fools, cherishing fallacious and contrived narratives of alleged “Arab (“Palestinian”) victimhood above facts, history and common sense. No amount of Islamic belligerence, anti-gay, anti-women, anti-religious pluralist sentiment can motivate these idiots to leave their cherished “victim”-“oppressor” narrative framework, so essential to their professional and political livelihoods.

That Jews existed in the Middle East for thousands of years before Islam and its belligerent, supremacist and totalitarian tenets came on the scene, is somehow ignored, or, deemed irrelevant.

As Instapundit often says, “Get Woke. Go Broke.” Hard to believe a low rent outfit like ASA has a $1 billion endowment. More likely that the legal fees incurred in doubling down on stupid will be a “set back”.