Florida Sec. of State Orders Recount for Both Senate and Governor’s Races (Update)

Florida Sec. of State Orders Recount for Both Senate and Governor’s Races (Update)

“The mandatory recount occurs if the winning candidate’s margin is less than 0.5 percent” 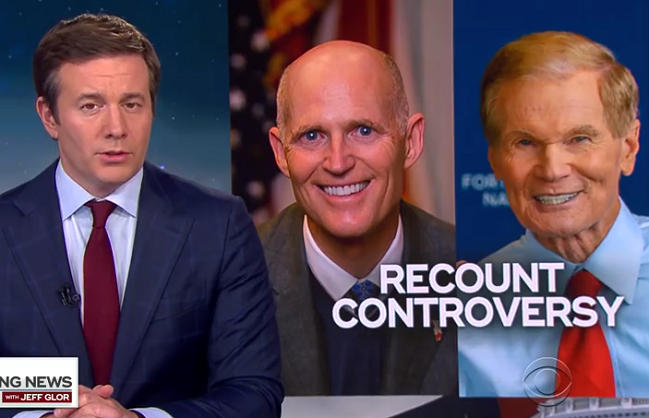 From joy and relief to oh-em-gee. Florida’s Republican Secretary of State has been forced to order a recount of Tuesday’s election results for both the Senate and the gubernatorial races.  The recount is mandatory and automatically triggered when the vote margin is less than 0.5%, as it has become since initial results were announced.

The recount results are due by 3 p.m. EST on Thursday, November 15th, 2018.  If there is a margin of less than 0.25% following this recount, there will be a second recount, this time by hand. The results of this second recount (which seems likely in the Senate race since the margin is already less than 0.25%) will be due three days later, on the 18th.

UPDATE [FS]:  Gillum has withdrawn his concession only hours after the recount was announced.

We’ve been closely following the Florida Senate and gubernatorial races:

Florida’s secretary of state announced Saturday that there will be recounts in the Senate and gubernatorial races after the races became tight enough to trigger them — amid controversy over the handling of the counts, which has sparked anger from Republicans

Secretary Ken Detzner issued the order after the unofficial results in both races fell within the margin that by law triggers a recount.

The votes in the Senate race between Democratic Sen. Bill Nelson and Republican Gov. Rick Scott, and the gubernatorial race between Republican Rep. Ron DeSantis and Democratic mayor of Tallahassee Andrew Gillum, will be recounted.

Both Scott and DeSantis led their races after the midterms on Tuesday, with Gillum conceding to DeSantis. But as the days went on, and more votes were counted, those leads have all but disappeared.  Scott’s lead by Saturday afternoon was reduced to 0.15 percent and DeSantis’ was 0.41 percent.

President Trump has weighed in today, stating that his administration is closely watching the recount.

He had previously said that Democrats were “miraculously finding Democrat votes.”

Meanwhile, many Floridians are protesting the recount.

We keep reaffirming there was a blatant foul like we aren’t sure what to do next.

I have Bill Burr in my head:

Burr: YES! The three time wife beater in the wife beater shirt has been beating his wife YOU MORON. Now help me pull him off and call 911.

BTW. ya know how we always say we need to win by enough to overcome Democrat fraud? I just remembered who I got that form.

The cucks who gave us groveling apology tours, not this hill, we can’t risk our minority/majority. Those guys.

We need to drop that. We are quickly approaching the moment where if we don’t fix vote fraud it’s going to fix us.

We let it multiply far too long.

I have no idea if the election officials actually provided their logs from the last week’s festivities. It seems that every past problem is being dropped as soon as a new stage is reached without consequences. Now Elias is suing on Nelson’s behalf because, why… how can these poorly trained election workers evaluate signature conflicts… so just accept them all. All of them. All. Right now. And the wheel keeps spinning and spinning onward…

If the courts have no self-respect, it’s hard to respect them from a distance.

Apparently, it’s not the Russians who threaten the integrity of our elections, but homegrown duplicitous despots like Brenda Snipes.

Two…or many more…things can be true at once.

There’s no question that Russia, China, North Korea and Iran screw with us any way they can.

Can you name an election that Russia, China, North Korea, or Iran changed the result of?

No. Can you name a recent one where they didn’t try?

Can you name one where they had NO effect?

You have an effect measurement? Please tell us what it is and how it works. To be effective it would need to give us the number of votes swung or manufactured.

I suppose, if you work really hard, you could find an illegal foreign money source and at least suggest it had the effect of buying more add time.

But measuring the effect? Good luck.

Per the original comment, I believe vote fraud is far more dangerous than the foreigners. No proof. But then you have none either.

Recount? Now that there’s an extra 100k votes what’s the point? Counting them will just ratify the fraud we witnessed.

All the Republicans had to do was wait until the Democrats were ready to apply the laws.

Instead of losing our spit and running around with our hair on fire, let’s step back…or up…and look at what’s happening and has happened.

1. there is a state-wide recount mandated by Florida law. A law passed (very likely) by a Republican legislature; this is a good thing for several reasons, one being that there will be a LOT of scrutiny imposed, including from the Feds

2. because of the scrutiny, standards state-wide will be much more rigorous than in some of the suspect counties

3. far from being a game-ender (bad as it is), our republic has often been rife with vote fraud, with it being so much the norm that it was a dirty joke in regions and cities across the US; we not only survived, we improved and put in place safeguards to make it more the exception than the norm

5. several elections around the nation were WAY too close for rational people to comprehend, but they were THAT close, without any hint of fraud (as noted by several, how several of the Deemocrat candidates polled more than 10% is a mystery…but they did)

So let’s extinguish our hair, reclaim our lost spit, put things in perspective (including historical), and closely watch due process as it is advanced.

Not a single thing that has annoyed me about this process has the slightest thing to do with a recount, or who is on the job. Courts issue orders only to see them completely ignored. Lawyers attempt to have lawsuits served and election officials are nowhere to be found for 12-14 hours at a time in spite of being available for opposing candidate counsel and seemingly everyone else. The recount laws have nothing to do with that.

In the main, if you’re not supposed to fiddle with ballots without observers from both campaigns seeing it, and then you do it anyway, this is a problem. I’m not saying this to “refute” your statements, I’m saying your statements leave out what has made some people cringe for days on end. Apparently we were just imagining problems and should just stop worrying our pretty little heads?

This was one of those rare times when you say stupid stuff.

So not worry my little head. Understood.

I hope the recount goes well, because I am not invested in who wins. I just want a process that works.

I hope the recount reveals whatever fraud there is, which I think is one of its purposes.

It gives an opportunity (hopefully) for a much more closely observed vote count under the eyes of people who are not present on election day (generally) and using a state-wide set of standards.

Rags, can you please explain how a recount can expose fraudulent votes? Since by that point they’re indistinguishable from legitimate votes, surely it will just count them again, thus appearing to legitimate the first count. What am I missing?

I thought I made that clear.

Well, it’s not clear to me, so perhaps you could explain it.

The purpose of the recount is to verify the accuracy of the initial vote count. All the provisional ballots and absentee ballots have been counted. And, as the ballots do not reflect the identity of the voter, there is no way to determine how that person voted and correct the total. Fraudulent ballots and voters are very hard to identify once they have gone through the system. The only cases of fraud, which are prosecutable, are those which leave some type of identifiable paper trail which leads to a specific individual.

The only way to reliably state that fraud has occurred in Broward of Palm Beach counties is if the number of verified voters who voted does not match the number of votes tabulated and excluded. Even then it is impossible to separate the fraudulent votes from the tabulated total. Once the vote is tabulated, it is essentially over.

I wonder how many student around the state are thinkin’, “Their always giving me grief, telling me that if I rely on my computer and smartphone too much I won’t be able to count!!”

“They’re always …” not “Their always …”. Downvoted myself for this sloppiness.

Could anyone please list the top 3 accomplishments of Nelson in his entire life.

remember … its not who votes … it is who counts the votes