The sun will still shine in the Sunshine State 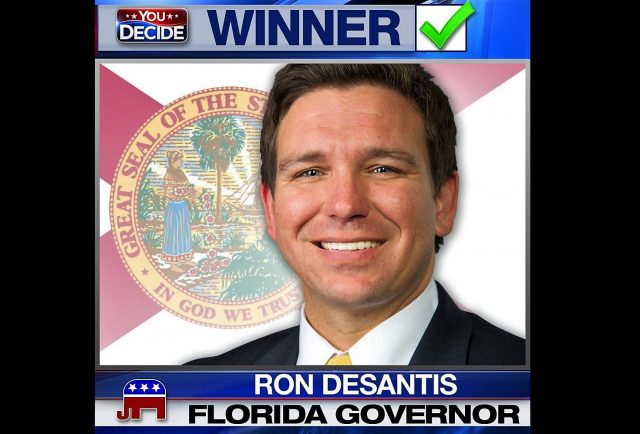 The polls were wrong. Gillum consistently was up by low single digits.

I think his embrace of the anti-Israel, terrorist-glorifying Dream Defenders hurt him.

Read the whole thing, Andrew Gillum’s ties to anti-Israel, terrorist-glorifying Dream Defenders should be a disqualifier.

This is a big win for Republicans in a key presidential state (Republicans also won the Governorship in Ohio, unexpectedly).

.@AndrewGillum is conceding #FLgov race: "Just because we didn't always come out victorious, we didn't retreat. We stood up. We stood strong. We spoke out." Says he called Ron DeSantis to congratulate him

I respected the job Scott did as governor. He was a competent executive. Gillum would have trashed that fine work and been even more corrupt than as mayor.

I’m glad DeSantis won and hope he is up to the job. I wish him the best of luck.

As a bonus we got rid of The Florida Spaceman.

Oops. Broward County just discovered 5 precincts of votes that they were holding just in case. All will be driven to be counted.
Broward has done this in every election since it tried to swing the presidential election for Gore. All of the commissioners become strangely wealthy after Broward does its thing with votes.
In a normal random audit of votes from this county, dead people, illegals, DACAs, double voters from other States, and felons are the norm.

I have to ask if that is a correct report, or sarcasm. Given it is Broward County, you must specify sarcasm if it holds even a modicum of possibility that it is true. You have far more than a modicum, the entire post is possible.

Good Lord, what is wrong with Florida? How could a literal nitwit get that close to victory? The fact that these Marxist twats are not getting curb-stomped scares me for my kids future.

Seriously, Arizona? McCain? Flake? Now you have a choice between a Warthog pilot and a communist, and, it’s a contest? Holy WTF.

Broward was very late with its election numbers, which makes me think shenanigans were afoot.

What is wrong with Texas! If an incumbent conservative senator like Cruz has to fight off a communist in Texas, what does that say? Is Texas flipping or is Cruz just that unlikable?

The GOP really has to develop a strategy to gain a foothold in big cities across the country. Right now, TX looks just like CA right before the Bush/Rove crowd stuffed Ahnold down our throats in the recall election.

Walker, Brat and Kobach losing is really disappointing to me. But two good things about yesterday:

2. Most of the GOP losses were RINOs. Add them to the RINO retirements and we have a GOP more aligned with the traditional GOP platform. Maybe these guys will have the spine to join Trump in fighting back for a change.

I live in Texas and yeah, I agree with you. It’s shocking how close the little bucktoothed beta boy came. Looking at Abbott’s numbers makes me hope this was due to a TDS deranged Dim electorate and the fact that Cruz, while a great Senator, is a very unlikeable politician.

I’m listening to reports out of Texas and the consensus seems to be that Cruz upset a lot of Texans with his criticisms of Trump and that he never would have won without finally inviting the wildly popular Trump to help him at the end. Had O’Rourke run against Abbot, he would have gotten smoked even spending twice as much money.

Cruz has zero charisma, always angry and humorless whether speaking to a crowd or being interviewed. Can’t he speak without reading from his notes? Is there a warm person in there under his skin thin?

On the other hand, that takes a lot of the shine out of O’Rourke’s narrow loss and should dampen all of the talk, even today, of his running for president. This was a colossal loss for the Hollywood crowd, not just financially but to their egos as well. They turned out to be completely ineffective everywhere they campaigned.

The cult-like worship of Beta on the left makes me think he’ll be seriously considered as a VP candidate by whomever wins the next Dim Presidential nomination. He clearly energizes the Latino base, and he would likely be viewed as somebody who could deliver Texas… a modern-day hybrid of LBJ and JFK.

I think it has more to do with the leftist news industry than anything else. They despise Cruz, and thought they could get O’Rourke elected. They promoted O’Rourke and trashed Cruz in every way they could, and got it close, but not close enough.

And Texans bought it? Money is all it takes? They did same to Trump and everyone he supported elsewhere and they managed to win in less conservative states. So no, I think this is about Cruz.

Florida is still Florida. Also, being a SEAL and getting your eye shot out gets you A) a lifetime sinecure in Tejas and B) a supermodel wife in Tejas.

How many fingers am I holding up, Winston?

Hint, it’s not the same as in the movie.

You crack me up, Gremlin.

sigh. I guess it could have been worse.

We barely held the line here in N Central Florida.

Florida pretty much mirrors the political make-up of the Us. Registered Republicans and registered Democrats are just about equal [registered Dems are slightly ahead number wise], with NPAs a close third. Minor party affiliation is a very distant fourth. The NPAs are composed of former Democrats and Republicans [usually liberal Dems and conservative Republicans] who have left the party and the rest are people who refuse to join any party for a variety of reasons. So, the NPA vote is usually pretty evenly split between the Dem and GOP candidate.

However, that is poised to change in the next election. The voters of Florida just voted to allow convicted felons, who have served their entire sentence, to register and vote. This is some 1.3 million people. And, it is speculated that these voters would be more favorable to Democrat and liberal candidates than they would Republican and conservative candidates. This could completely change the political landscape in the state. Add in the 300,000 Puerto Ricans who have immigrated to the state [if they remain] and the state could be bright blue in 2020.

Broward County Board of Elections is attempting to reverse the results of the election by finding enough ballots to overturn the election. People need to know what is going on. Thousands of votes are being manufactured for Nelson and Gillum each day, in the dark of the night.