“She’s eager to help out Nelson and Florida Democrats to gain important brownie points in the party for her own expected White House campaign.”

Elizabeth Warren, having won reelection to the Senate easily, already is shifting into presidential campaign mode, though she is playing coy as to when she will formally announce.

Warren is trying to exploit the Florida recount, as Joe Battenfeld at The Boston Herald reports:

Just days after her re-election win in Massachusetts, U.S. Sen. Elizabeth Warren turned her eyes to the presidential swing state of Florida, making a pitch to raise money for a Senate recount.

It’s the latest in a series of moves by Warren to inject herself into an important presidential primary state.

Warren sent a fundraising appeal to her supporters, urging them to donate to help Democratic Sen. Bill Nelson’s bid for a recount in his narrow loss on election night to Republican Rick Scott.

Warren is hoping the answer is yes, but her motives seem less than selfless. She’s eager to help out Nelson and Florida Democrats to gain important brownie points in the party for her own expected White House campaign.

Florida is an influential early primary state and has long been a crucial battleground in presidential contests. Warren is hoping her fundraising pitch for Nelson will be remembered by Florida Democrats in 2020.

Arguing that “the election’s not over yet,” the Massachusetts Democrat noted that if the margin between Nelson and Scott stays under 0.25 percent, the recount will be done by hand.

Warren stressed that “it could make all the difference in the world” if Nelson wins the recount and Democrats keep another Senate seat in the GOP-controlled chamber.

“Don’t forget: One vote in the Senate last year saved health care for tens of millions of Americans. And if we rack up one more win this year, we’ll be that much closer to taking back the Senate in 2020 and beyond,” she contended. “Controlling the Senate could come down to one race – and helping Bill Nelson win this year could clinch it.”

There is little doubt that Warren is moving towards a formal declaration next year. She hopes she has put her Native American deception behind her with the carefully planned rollout of her DNA test results in October.

But the problem isn’t going away, because no one (other than perhaps the Boston Globe) is buying her claim to be Native American, Not even the NY Times.

The New York Times ran an article celebrating the election of two Native American women to Congress, Deb Haaland from New Mexico and my former student Sharice Davids from Kansas.

The article focuses on the fact, as have many articles elsewhere, that Haaland and Davids are the first Native American women elected to Congress, Native Americans Score Historic Wins in Midterms After Years of Efforts: 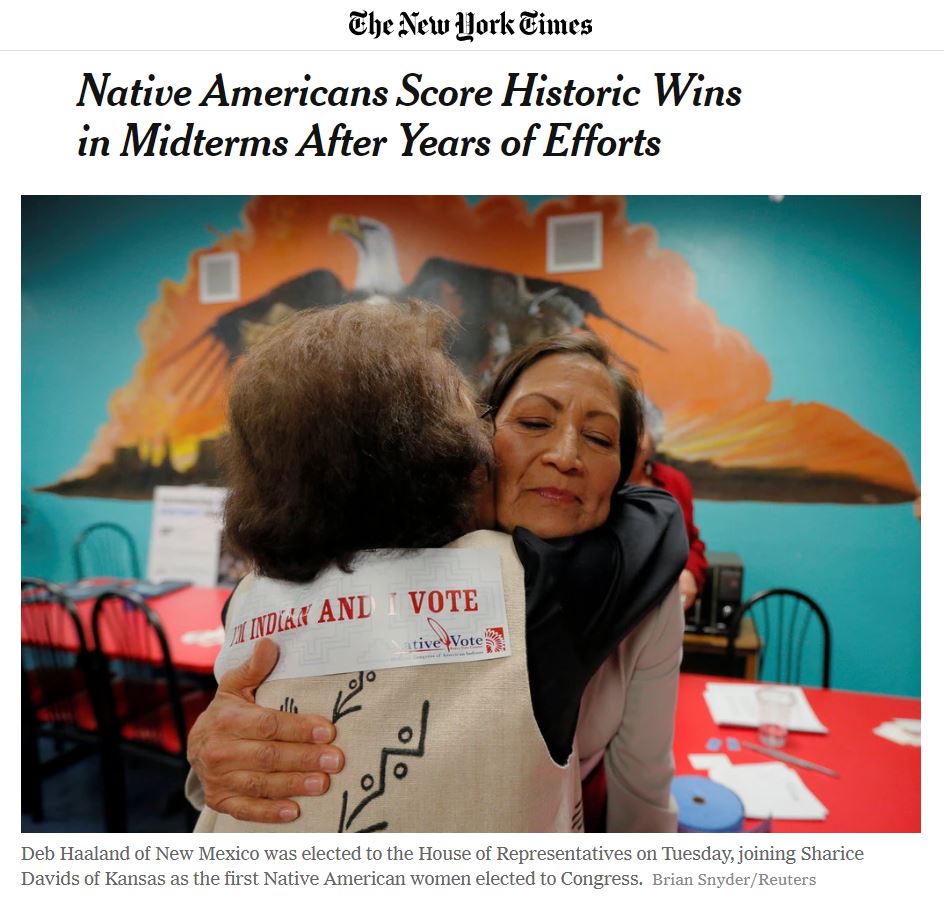 Native Americans notched historic electoral wins on Tuesday, in a country where indigenous people were not granted the right to vote until 1924….

“The candidates themselves were just exceptional in this year’s races,” said Mellor Willie, a founder of 7Gen Leaders, a “super PAC” formed this year to bolster emerging Native American political leaders. “But it often comes down to money, and that’s where we came in.”

7Gen Leaders was a crucial source of financing for the two Native American women elected this week to the United States House of Representatives: Deb Haaland, Democrat of New Mexico, a community organizer and a member of Laguna Pueblo; and Sharice Davids, Democrat of Kansas, a former mixed martial arts fighter and a member of the Ho-Chunk Nation….

Notice who is not on the NY Times list? Elizabeth Warren, who already is in Congress. Doesn’t the NY Times consider her Native American? After all, she took a DNA test which her selected expert said might show she’s as much as 164th Native American or as little as 1/1024th, or not at all. (Of course, actual Native Americans reject DNA evidence as in any way relevant.)

The election of Ms. Haaland and Ms. Davids will double the number of Native Americans in Congress. They will join two Republicans from Oklahoma, Tom Cole, a member of the Chickasaw Nation, and Markwayne Mullin, of the Cherokee Nation.

When will Warren formally declare her candidacy? When her team of political consultants tells her to do so.

She’s very Hillary-Clintonian, nothing is spontaneous or natural, she’s preplanned and packaged. It flopped with the DNA rollout, but it’s the story of her political career. And undoubtedly, her political consultants told her to pounce on the Florida recount.

The fund-raisers of both parties are nothing if not 1) creative, and 2) cynical.

So why can’t her college records be released? Does FOIL not apply? If the woman used affirmative action to get ahead, shouldn’t we have the right to know?

What is a “brownie point”?

I hope I’m not making an idiot of myself by assuming this question is serious :-). A “brownie” is a fairy type creature who comes into your house in the middle of the night and does chores for you. The “Brownie” level in the Girl Scouts is based on a story about the brownies. http://blog.girlscoutsww.org/2012/11/the-brownie-story/

Things you do for others get you “Brownie points” you then can turn in for favors from them.

Elizabeth Warren claims to have a brown nose and high cheek bones but was shown to be a fraud by Professor Jacobson. After resorting to DNA testing she claimed victory with one millionth of a brownie point while real Cherokee Rolled On the Floor Laughing their Ass Off.

I think there is a distinction between those (like the NYT) who do not accept Warren as Native American, and those who view her usage of family lore for an unfair advantage in her career.

The NY Times accepts the fact that she is not Native American. Yet they would never judge her motives, allowing her to excuse herself by saying it was an honest mistake.

I dont think we can convert anyone on that. She is protected by the media so the full truth will never come out.

I bet the original files at Harvard are either destroyed or impenetrable through access controls.

After watching what is going on in FL, AZ and GA do not count Warren out as a serious threat in 2020.

Warren soft spot in her heart for Florida. Seminoles and Cherokees were both among the five “civilized tribes”. She may even be a direct descendant of both!

By way of her 1/1024th South American DNA. In contrast, there is a 1/20th chance that I am a direct descendant of Genghis Khan. Just like every other male on the planet.

AFAIK, the recount won’t cost Bill Nelson a dime. It’s costing taxpayers like me, though, although if we had competent Supervisors of Election this wouldn’t be such a mess.

And look out: Omarosa’s hired a lawyer to make sure her vote counts. This can’t get any stranger.

I don’t know why people continue to call those two incompetent. They seem to be doing a bang-up job of stealing two very important – even critical- elections.

It’s always mesmerizing when Elizabeth Warren speaks forcefully, with her tense facial expressions and her Hitleresque arm motions. All she needs is a German accent and a toothbrush mustache.

Perhaps she will practice law without a license like she did in Massachusetts.

Not only is Warren lying, I wouldn’t trust this DNA “expert” as far as I could throw him. I read the language in his report. What he isn’t telling you is that the markers that are “strongly associated” with American Indian ancestry are also associated with another ethnic group. I normally don’t use Wikipedia (or associated sites) as evidence for anything but I actually did research into this and this aligns with more scientific sources. Since it’s short, sweet, and was at the top of my search, here we go:

This computer is a piece of crap. It’s barely functional; it’s not really an improvement over the five y.o. laptop that actually was functional when it was a week old, like this one. Anyway, for the third time:

“D9S919 is a STR marker located on chromosome 9. It was previously known as D9S1120 and under this name it was reported that an allele value of 9 was only found in the Americas and far eastern Asia. The presence of an allele value of 9 is therefore a strong indication of native american ancestry somewhere within a person’s pedigree.

And for the third time it “auto submitted” before I was finished.

I’ll make it short because I have no choice. The chromosomal sequences that are “strongly associated with native American ancestry” can be found in eastern European ethnic groups and Russians because the source is the same. East Asians that crossed the Bering land bridge brought it to North America while East Asians such as the Mongol hordes sweeping west across the steppe who tended to indulge in rape along with their plundering and pillaging when they invaded those areas.

Note Bustamante doesn’t tell you this in his report. Note he uses ethnic groups in the UK as a reference, knowing full well the invading East Asian hordes never made it that far.

“I’ll make it short because I have no choice.”

What! Aminius has no free will?

Should be, “Arminius has no free will.”
Apparently, I don’t either. I think I’ll change my name to Calvin.

Correct. The markers were Western Siberian. Markers carried by virtually all Europeans (and innumerable Asians) with Eastern European ancestors. This is why we are called Caucasians. In fact it is amazing she has so little.

Warren is a fraud and a crackpot, period.

She really is an intellectual fraud. Her professorial appearance conceals the mind of third rate street lawyer such as Avenatti.

Liz would exploit a turtle crossing the road if she thought it would get her one step closer to the White House.

Lizzie Warren took an axe
And gave the Cherokee forty whacks.
When she saw what she had done,
She gave America forty one.

The left’s plan for America: