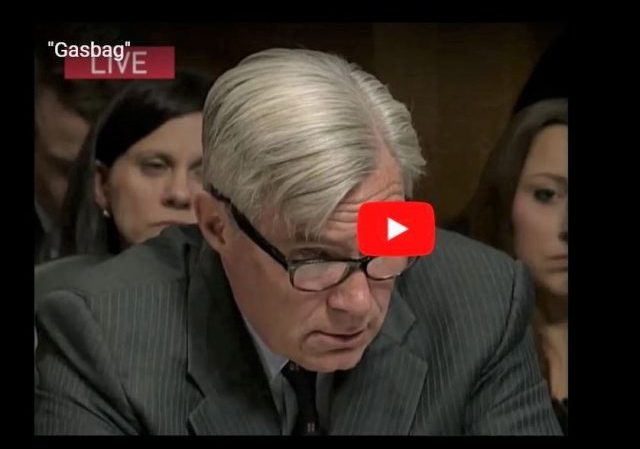 Democrat Sheldon Whitehouse of Rhode Island has earned national mockery due to his obsession with Brett Kavanaugh’s high school yearbook entries, particularly a fart joke entry. Even Saturday Night Live made fun of him.

Whitehouse’s theory that “boofing” refers to a sex act not farting, is likely to meet a similar fate.

Whitehouse also generated negative media when it was disclosed that Whitehouse referred a constituent making accusations that Kavanaugh was involved in a 1985 sexual assault to a reporter at the same time as Whitehouse referred the matter for investigation to the FBI and Judiciary Committee. That accusation was later recanted, and the constituent has been referred by the Judiciary Committee to the Department of Justice for investigation and possible prosecution.

Whitehouse’s performance as to the yearbook and referral of the accuser to a reporter has generated a lot of negative local media coverage, particularly on local talk radio.

Whitehouse is up for reelection this year, and on paper it should be an easy race for him. But I’ve always believed that he was vulnerable if things fell into place for his Republican challenger, former Rhode Island Supreme Court Justice Robert Flanders.

I wrote about Whitehouse’s vulnerability in August, RI Senate Race could be the big surprise of 2018.

The Kavanaugh hearings could be the big break that Flanders needed.

As previously posted, in an email, Flanders’ campaign manager Richard Kirby said donations and calls were flooding in from around the country:

The Campaign has seen a big increase in not only contributions at various levels from all over the country, but also a never ending parade of telephone calls and emails condemning Sheldon Whitehouse for his extreme partisanship. Not to mention his rude condescending manner to Judge Kavanaugh. Contributions have been coming in from places such as Florida, Georgia, Louisiana, Nebraska even liberal California!

Here comes Bob Flanders. The Rhode Island U.S. Senate race has heated up as Senator Sheldon Whitehouse has watched his poll numbers collapse in the aftermath of his embarrassing performance questioning Brett Kavanaugh.

The Flanders campaign has gone into full gear as the race has moved into a single digit lead for Whitehouse. A poll last month by WPRI had Sheldon at 54% and Flanders at 35%, however the numbers have changed. Democrat sources say new internal numbers show Sheldon Whitehouse at 47% and Flanders at 40%, with 13% undecided. Whitehouse has watched his numbers with Independent voters collapse and his numbers with men have fallen significantly.

I heard the same thing, that Whitehouse’s internal polling showed him ahead by high single digits. I repeatedly emailed Whitehouse’s campaign manager for comment, but never received a response.

This is a longshot opportunity for Republicans in an unexpected place. Whitehouse’s performance is an unusually vivid embarrassment to a state which is used to embarrassing politicians.

Whitehouse has a huge bankroll, but money can’t buy credibility. Being mocked and the butt of jokes is perhaps the cruelest cut for a politician.

Will national Republicans and the grassroots come to Flanders assistance, and maybe pull off what would be the biggest surprise of 2018?

I just took a phone call from Wheldon Shithouse’s camapaign. It was fun giving the guy an earful. The word “dufus” made its way into the conversation. I think I said something along the lines of “national disgrace” and “embarrassment to the people of Rhode Island”.

You could have made the comment that not even Texas is big enough to hold all the crap coming out of his mouth. We would have understood.

I’ve done my share of GOTV calling. I’d never be rude to the caller. I saved my insults for Wheldon. I’d like to think the guy on the phone found my responses entertaining. It was obvious I’ve been watching the Judiciary committee hearings, and that he hadn’t. I’d also seen Bob Flanders’ ads. If the GOTV caller was paying attention, I deliberately gave him a lot of data points for his call report sheet.

I would like to apologize in advance to any Feinstein campaign workers that call me to try to get my vote.

… should have prefixed it with … “And tell Boof …”

Whoever helps Flanders cut his videos is pretty good.

Having watched him in the Kavanaugh hearings, I’ve concluded that the good people of Rhode Island have never met the gentleman nor have they ever heard him speak. I’t just an old, rustic tradition to vote for the unknown.

I’m new to RI so this is my first opportunity to not vote for Shithouse. He’s only been elected to the senate twice so there’s time to get rid of him before he becomes a permanent fixture.

Please let this be his I am Fartacus moment! And Boof the dufus disappears and is replaced by senator Flanders! We donated to Bob Flanders this weekend. Please give whatever you can! Flandersforsenate.com. Wake up RI!

It’s really not fair to blame Whitehouse for that. His dog tricked him into asking the question.

I donated to Flanders’ campaign. I live in Idaho. Take that Sh*thouse!

Too bad for Senator Boofhouse that pullmyfingerdotcom is no more. He would have selected the long, cheesy wet fart.

The commercial was excellently edited. The Boofhouse reaction shots were spot on.

I don’t know who Flanders is from Adam’s off ox (or what I read here) but I just gave $50. Full disclosure: if Sauron were running against Whitehouse, I’d have contributed to him. And I’m from Oregon, about as far away from RI as you can get and still be in CONUS.

Excellent commercial. Hopefully it, and others like it, will persuade the 13% undecided, as well as some of those so-called 47% Dem vote, to see the light!

He is a disgrace, a shame to RI and the nation.

Flanders for Senate in RI!

Another DemocRATs October surprise which goofed in their faces. They will never learn, even after all of the stuff what backfired on them.

“Whitehouse’s theory that “boofing” refers to a sex act not farting, is likely to meet a similar fate.”

It has met that fate. Urbandictionary has multiple entries in the 2000s listing boofing as a fart.

That’s about as close as we are going to get to multiple corroborating contemporaneous accounts since there wasn’t an Internet in 1982, LOL.

Yes, this whole issue is ridiculous, and debunked with a single google search in 60 seconds.

But I suspect Internet skills are beyond Sheldon’s ken if he wanted to be something other than a useful idiot on this confirmation process.

Whitehouse is one of those idiots that scare the nation. Clearly a moron who studied ass-kissing in school, he gives definition to the concept of the privileged fool. This Yearbook Decoder needs to be as far apart as he can from the real world.

The French verb boufer means to eat as a glutton. Hence the French comedic film “La Grande Bouf,” wherein a diner becomes deadly as guests eat themselves to death. There is a slang variant, “Boufer La Chatte,” which does have a sexual connotation. The likliehood that a bunch of 15 year old boys would have been aware of any of this is quite remote.

For his next ad, I’d do a play on the CapitalOne commercials: ” What’s in YOUR yearbook?”

Are the voters stupid enough to vote him back in?

Well sadly I believe the answer is yes since they voted him in the first place!

He looks like a Senator—but I’m not certain they installed a brain in him.

Fart jokes aside – I would think being a State Supreme Court Justice, would be pretty damn good qualifications for SENATOR.

Best of luck to Flanders, this would be a memorable gain, if he can pull it off…

Just last night I donated to Flanders. Of course most of my senatorial campaign contributions are going to Ted Cruz, but maybe my little bit will help get the pompous ass Whitehouse off the public teat.