Kavanaugh: “If we want to talk about flatulence at age 16 on a yearbook page, I’m game.” 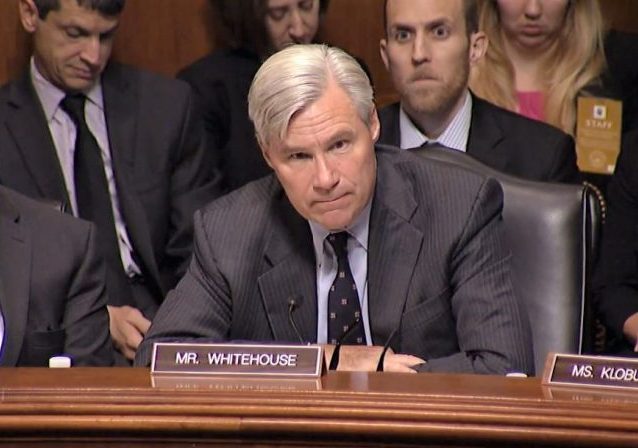 I can’t believe I didn’t see this live.

I was off the grid for much of the question and answer portion of Brett Kavanaugh’s hearing testimony today.

When I got back on the grid and tried to figure out what had happened, I saw references on Twitter to farting, and wasn’t sure what it was about.

Apparently the *esteemed* Senator from the State of Rhode Island and Providence Plantations, Sheldon Whitehouse, thought he had a line of questioning that would blow Brett Kavanaugh out of the water.

It had to do with Kavanaugh’s high school yearbook.

Whitehouse, as you know from his prior cross-examination of Kavanaugh, is unnaturally aggressive and domineering, Worst performance of Kavanaugh Hearings Day 2 – Sheldon Whitehouse.

This time he had him, he really had him:

Kavanaugh’s yearbook page includes the phrase, “Judge, have you boofed yet?” This apparently references his friend Mark Judge, who is alleged to have participated in Kavanaugh’s sexual assault of Christine Blasey Ford in 1982. Judge’s yearbook page has the phrase, “Bart, have you boofed yet?” Judge went on to write a memoir in 1997 about his alcoholism that included a character called “Bart O’Kavanaugh,” though Kavanaugh did not confirm if it was based on him.

But Kavanaugh said it was simply a teenage joke between him and Judge about “flatulence.”

“If we want to talk about flatulence at age 16 on a yearbook page, I’m game,” he told Sen. Sheldon Whitehouse when questioned about it.

The left constantly redefines the meaning of words. Glad to see they are still doing it, while the rest of us just use them as they were commonly defined.

It was a word used in my area to refer to farting too. It is probably a regional slang.

Whitehouse certainly got boofed on, but then again, his opening his mouth typically is nothing but boofing.

As the caterpillar said to Alice: When I use a word it means exactly what I want it to mean, no more and no less.

Never heard the term before. But forever after, when I see Mr. Whitehouse’s face or hear his voice or read his name, that’s the first thing that will come to mind.

This is what I think of when I watch these people:

Tell me that you can tell the difference between skits and reality.

The reason SNL isn’t funny anymore is that today’s comics prefer to run for office and do it for real rather than wasting their time on silly skits.

Because every judicial nominee to the Supreme Court needs to be asked about fart jokes in high school.

Have the (censored) vote.

Sheldon has be to the most disgusting almost-man ever to disgrace the Senate. I doubt if the pathetic thing has ever had to mow the lawn, paint a bedroom or wash his own car.

It would not surprise me to learn that he shares hair dressers with John Kerry. I am grateful that I do not have to share a public sewage system his arrogant imminence, heaven forbid he probably has someone else to excrete for him to save him from his own humanity.

I would respectfully disagree and give that “honor” to Sen. Blumenthal

I’ve never heard of boofing or the Devil’s Triangle. It’s nice to know I can learn bad words by watching Senate testimony!

PLEASE let us talk to Sen Whitehouse’s highschool class maters. That should be VERY INTERESTING.

As they say on Instapundit: “your moral and intellectual superiors.”

Here’s a newflash, Senator Whitehurst: fart jokes are funny, especially at age 16. But more to the point, how many times did you “boof” during this hearing, Senator?

I’m sure at times he is a flaming boofter.

Whitehouse’s infantile line of questioning stands out in a day of spectacular and shameless infantilism from the perpetually adolescent Dumb-o-crats.

Thanks to Sheldon, that old legal saw may require updating:

You gotta be careful with that stuff. According to a friend, she watched the neighbors kids when the husband went to the ER because he experienced a, uhm, backdraft.

Whitehosehead and the rest of the demoncraps almost undoubtedly took ‘boof’ as a subtle change of ‘boff’ which is slang for engaging in sex.

That this mistake blew up in their face is comic gold.

Boofed in their faces.

Only part of the hearing that was remotely funny, actually. I know it brightened my spirits at the time. I thought the degree of contempt Kavanaugh displayed for Whitehouse’s questioning was spot on.

Admittedly, I didn’t get to see/hear Kamala, so there might have been another remotely funny part.

Sheldon has long been a nutter of rare quality and breed, so this was not terribly surprising.

Can you imagine what a meeting with all these brain dead people would be like in a private session. I would want to commit suicide.

Hell is calling for them.

I have a different word than ‘suicide’ for what I would want to do there.

How can someone like Weldon Shithouse (my senator, yea) be part of the process to determine who should be on the SC? There is a problem with this process and this lynching of Brett Kavanough and his family.

Weldons questioning of Dr Ford was a campaign speech. If I was Dr Ford I would have told him to ask his questions or SFU.

Someone needs to get ‘ol jerky speech’ a slang dictionary so he doesn’t waste anyone’s time anymore.

How is it that this cretin is a senator? His electors must be brain dead.

Voter fraud would be my guess.

RI, with just over one million population, has, according to statistics and averages, 200,000 TOO MANY registered voters.

I read that the reelection of Weldon Shithouse may be one of the surprises to emerge this year and THAT was before the Kavenaugh Confirmation Circus.

C’mon RI, you can do it: Vote the Sucker out of office and permit Shithouse to spend more time with his family and going to church to repent for his behavior.

“If we want to talk about flatulence at age 16 on a yearbook page, I’m game,” he told Sen. Sheldon Whitehouse when questioned about it.

In an appearance of GREAT lines, this was one of the most memorable. I was listening on the Radio at the time it was discussed, and it was a both memorable defense, and a quick, short, and dismissive quip that put Sen. Whitehouse in his place. It was this sort of “full embrace” of the absurdity of these second attacks which was most effective, by showing the Socialists were flailing at anything that they thought they could make stick.

One might liken it to a chasing after the (*ahem*) “wind.”

Whitehouse punching above his weight. Of course, all of the democrats reach their intellectual ceiling when the topic hits fart jokes told by teenagers.

When one is a Leftard and you don’t have fact and truth all one is left with is fart jokes.

Well, I guess that would seem to be of great interest to a guy named Weldon Shithouse.

Why does he remind me of Peter Graves as the pilot in Airplane?

These stupid demonrats made total fools of themselves yesterday. I don’t see any end in sight.

Senator Boof Whitehouse! I love it!

Sorry to be picky, but, it’s from “Through the Looking Glass” and the character Alice is talking to is Humpty Dumpty, not Caterpillar.

“When I use a word,” Humpty Dumpty said, in rather a scornful tone, “it means just what I choose it to mean—neither more nor less.”

“The question is,” said Alice, “whether you can make words mean so many different things.”

“The question is,” said Humpty Dumpty, “which is to be master—that’s all.”

Lewis Carroll does seem to have somehow understood what would happen when the Good Ship U.S. Constitutional Law met the postmodernist textual interpretation iceberg. Which is surely remarkable foresight for a 19th century British novelist!

Now, about about Carroll’s fascination with very young girls …

Democrats have shown themselves for what they truly are, ignorant low-lifes with no ethics or principles.