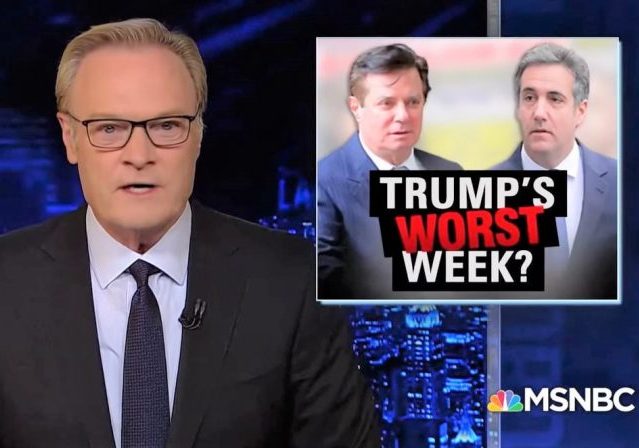 The convictions of Paul Manafort and Michael Cohen had #TheResistance giddy with excitement.

This was the end. He’s a gonner. WORST WEEK EVER.

Some of us were skeptical, The value of Trump to the Trump voter is that he stands between them and #TheResistance.

So how does the polling after Trump’s worst week ever look? 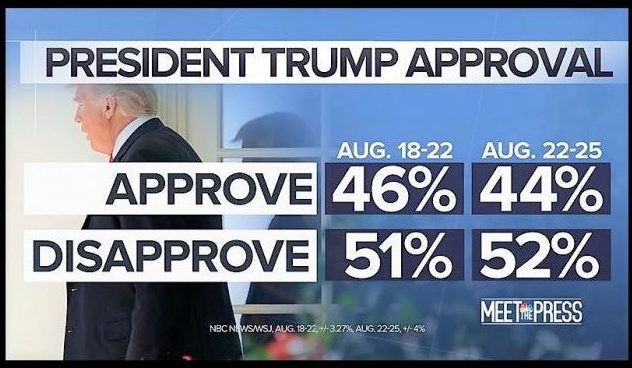 Republican pollster Bill McInturff of Public Opinion Strategies, who conducted this survey with Democratic pollster Peter Hart and his team at Hart Research Associates, called Trump’s approval rating “remarkably stable” despite the Manafort and Cohen developments, both of which became public on the same afternoon last Tuesday.

Hart adds that, for Democrats hoping to craft a midterm election strategy, the week’s news thus far “represents a fools gold opportunity rather than a silver bullet solution.”

So Democrats have an advantage, which means turnout and peculiarities specific to particular races could be the difference as to whether Republicans hold the house.

The stability in Trump’s polling shows that people may be tuning out media hysteria. Foaming-at-the-mouth attacks on Trump and Trump voters may have achieved all it is going to achieve, which is mostly psychosis among liberals, but that may not be enough.

Perhaps that’s why, as Mike pointed out earlier, Democrats Have a New Midterm Strategy – Ignore Trump.

But he will not be ignored.

Where the MSM is all Trump hate all the time, there is no discernible difference between Trump’s best and worst weeks. I wonder if anyone in the MSM has ever read “The Boy Who Cried Wolf”?

The Golden Rule for all these crooked polls is to add ten for Trump.

Probably because for more than 2 years dems have been screaming “RUSSIA, RUSSIA, RUSSIA” and nothing with Manafort nor Cohen had anything to do with it. You can’t charge Trump with treason and then say a campaign finance violation is a huge impeachable deal. Though I’ll bet we’ll find out it was Cohen, not Trump, that initiated the payments. Trump just told Cohen to deal with the situation.

Like no one denying the wiki-leaks DNC stuff, or Podesta emails were NOT AUTHENTIC.

The question was NEVER ASKED, did whore-pornstar (ok ARTEEST) Stormy come looking for a payoff (think they call that BLACKMAIL/EXTORTION), or did Cohen/Trump seek out those who could potentially damage him (I’m thinking the former).

Likewise with McDougal. Pretty sure the Enquirer didn’t SEEK HER OUT – she went to them with the story (not blackmail/extortion) and Ames gave Trump/Cohen the option to reimburse him & own the rights to the story (as in – opt not to publish).

Either way – not a “campign violation”, unless you make the (mpossible) leap to: since DJT financed his own campaign, every penny he possesses is now “campaign funds”.

Likewise -charges 7 & 8 that Cohen plead to – were NOT EVEN CRIMES, because there was NO INTENT TO BYPASS campaign finance laws (since they WERE NOT CONTRIBUTIONS), and it doesn’t matter if it (potentially) affected the election. The fact that the SDNY put that in there, was PURELY FOR POLITICAL EFFECT. They should be DISBARRED FOR MISCONDUCT.

DJT was correct in one respect – he could have shot someone in broad daylight on 5th avenue, and I STILL WOULD HAVE VOTED FOR HIM. He could do it to TEN PEOPLE between now and 11/2020 – and I WOULD STILL VOTE FOR HIM.

So banging whores (ok – arteests) and playboy models doesn’t change that. THE ONLY PERSON that has a right to be pissed is Melania, and she KNEW WHO/WHAT SHE WAS MARRYING…

“…he could have shot someone in broad daylight on 5th avenue, and I STILL WOULD HAVE VOTED FOR HIM.”

Particularly since the probability that the person shot would be a Democrat voter would be 99.8%+.

Why isn’t there any concern about Hillary’s $87 million in campaign violations?

We learned the first thing from Clinton too. He was guilty as hell, but there was no way any D senator would vote to convict him, and he flaunted his inevitable acquittal as if it were a vindication.

The insulting thing is that he signed into law the very Violance Against Women Act (VAWA) that he was later guilty of violating. The reason he pergured himself and suborned perjury was because he made it legal to question predators like him about their prior bad acts.

Actually I am not entirely sure about the state of the law before the Clinton presidency. I do know, post tail-hook, the Dems were all kinds of crazy for laws that Clinton later broke.

Here’s what this all means:

Trump’s voters are now sectarians just like the minority Alawite supporters of Assad. They will support the leadership that protects them because they think if they lose they’ll probably be wiped out (IMO, they’re probably right).

This is a matter of life and death, so they’re not going to be distracted by trivial crap.

The Left is composed of NOTHING BUT sectarian coalitions wearing black masks attacking people you hate.

The revolution you want to precipitate will devour you because you, in your narcissism, believe you are the majority, but you aren’t, not by a long shot.

It will be a painful lesson for you, one you are unlikely to survive.

Your time is up. Your days are numbered.

Soon it will be open season on mask-wearing rioters. No daily or possession limit.

The problem here is that the generic ballot is an aggregate measure. It is almost irrelevant for individual House seats. If 3 million people in Los Angeles are indigo blue democrats, that doesn’t have any effect on 30,000 Republicans in the hinterlands.

Something I noted during the ’16 election cycle.

Comes a point in time where it is put up or shut up. What is being exposed at the federal level is both eye opening and somewhat scary at what can be accomplished if you are not one of “them”. 🙂

One thing the “resistance” never talks about is the ability of the President to invoke the Insurrection Act. The Act was amended in 2007 to give the President greater unilateral authority. Lawlessness could amount to State officials using cover of law (indictments) in an attempt to overthrow the Government of the United States.

Do the Resistance fighters really want to see this through?

What does it all mean for November 2018?

It means they only have a few months left to tweak their poll methodology and get Hillary elected.

That’s because we know the gaslight presstitutes lie about EVERYTHING.

Yes, it’s been quite a week. The stress was too much for even John McCain.

Who cares about Stormy? Banging whores as an issue is a ship that sailed over twenty years ago with the old salt Seaman Staynz at the helm. If Trump boinked the fat slut, well good for him. I just hope he white-washed her tonsils instead of her dress.

And, boy does that Lawrence O’Brien look deranged. Someone at his network should have a net at the ready.

Here’s my unsophisticated take on Cohen. Rich people pay ridiculous amounts of money to lawyers to ensure they accomplish their goals legally. If Cohen failed, it’s malpractice on him not Trump.

She-Guevara and the Antifa is the alternative to Trump. I don’t see any Trump voter changing their vote soon. Oh= and McCain and Romney also both failed to win the Presidency. So that makes Trump MORE likable than eithe of those two clowns.

Oh and that war on the news media??? -Whatever happened to doors getting kicked in at 4:00 am for journalists critical of Obama policies?

No one knows, but Trump voters still remember. We also remember being called racist and Nazis for the past decade. So they could actually catch Trump red-handed and he’s still better than the GOP or Dem alternative.

Trump’s approval ratings remain steady. In other words, people other than those who get paid to hate Trump 24/7 don’t really care about any of this media silliness.

It only means one thing. That even the people who watch the MSM meltdowns, don’t believe a word of what their being told. That’s a good sign. Poor NBC having to admit this, and poor WSJ who threw in with them. I recently cancelled the Journal, I might add.

Oh and I forgot, “IT’S THE ECONOMY STUPID!” The immortal words of James Carvel.

Didn’t Carville also say something about dragging a one hundred dollar bill through a trailer park? The [email protected]@rd.

As you can tell, I’m no spelling Nazi. I don’t even know if I got it right. I refuse to look it up.

I keep hoping Trump will call for
a “Warren Commission” to investigate
corruption in ,DOJ, FBI, CIA, IRS,
and put people on it everyone respects.
Let the cards fall where they may.

Not bad for a worst week after all.