While the media currently is focused on the Trump-Putin Summit meltdown, Democrats and leftist operatives are focused on taking down Brett Kavanaugh.

Before the Trump-Putin summit, the media and Democrat frenzy focused on Trump’s nomination of Brett Kavanaugh to fill the seat being vacated by Anthony Kennedy.

It was Kavanaugh Derangement Syndrome:

It was, even before Kavanaugh was formally nominated, The Godfather Part SCOTUS: Preparing for Democrats to “go to the mattresses” over Trump pick:

And then there is NY Times Editorial Board unhinged.

The Editorial Board issued a call for Democrats to go all Godfather in fighting whomever Trump picks to replace Justice Anthony Kennedy:

The Godfather reference of “going to the mattresses” refers to a total war between the crime families.

… on Journalist and Resistance Twitter, on CNN and MSNBC, and among many Democrat politicians, the same people who called Trump a traitor since the day he was elected, and in some cases before he was elected, were still calling him a traitor, but even more loudly. A congressman called for the military to intervene. There were demands that all senior officials in the administration resign, and that Trump himself resign….

Understand that, while there are some people fairly concerned that Trump’s press conference performance did damage, the overwhelming chorus of treason-accusers and meltdown-instigators is simply a continuation of the slow coup against the election result we have witnessed continuously since the election.

My advice: Carry on.

Expansive document demands, meant to slow down the Senate process, is one of the main mechanisms. But Mitch McConnell has already signalled he’s not going to allow that to happen without Democrats playing a political price. Politico reports, McConnell issues Supreme Court ultimatum:

Mitch McConnell has a warning for Democrats demanding copious documents on Supreme Court nominee Brett Kavanaugh: Be careful what you wish for.

The Senate majority leader privately told senior Republicans on Wednesday that if Democrats keep pushing for access to upwards of a million pages in records from President Donald Trump’s high court pick, he’s prepared to let Kavanaugh’s confirmation vote slip until just before November’s midterm elections, according to multiple sources.

Delaying the vote past September would serve a dual purpose for McConnell, keeping vulnerable red-state Democrats off the campaign trail while potentially forcing anti-Kavanaugh liberals to swallow a demoralizing defeat just ahead of the midterms. Senators said McConnell believes the Democratic base will be “deflated” if they raise hopes of defeating Kavanaugh only to lose just days before the election.

The hunt of something Kavanaugh might have said, no matter how long ago, that could derail the nomination is the main focus because Kavanaugh’s legal credentials leave little room for attack, Democrats are on the hunt for Brett Kavanaugh’s paper trail. That hunt took on more urgency in recent days after a college-era writings derailed the nomination of Ryan Bounds to the 9th Circuit.

Michael McGough writes in The Los Angeles Times, Democrats are on the hunt for Brett Kavanaugh’s paper trail:

Almost 13 years later, it’s Judge Brett Kavanaugh who is up for confirmation to the high court, and Senate Democrats are insisting on spelunking through records of his time in the Bush White House.

From 2001 to 2003 Kavanaugh served in the White House counsel’s office. From 2003 to 2006, when he became a judge on the U.S. Court of Appeals for the District of Columbia Circuit, he served as assistant to the president and staff secretary.

But how many documents should be made available? Democrats, the vast majority of whom are poised to oppose the nomination, are taking a maximalist position. Sen. Chris Coons of Delaware has said that members of the Judiciary Committee would demand the release of “every single record that might be relevant.”

California Sen. Dianne Feinstein, the ranking Democrat on the Judiciary Committee, noted on Thursday that the administration withdrew the nomination of Ryan Bounds, a candidate for an appeals court judgeship, after concerns were raised about his writings as a college student.

Feinstein asked: “If Republicans agreed that Bounds is not qualified because of what he wrote in college, how could they possibly argue that material from Brett Kavanaugh’s time in the White House and as a political operative [isn’t] relevant?”

Axios reports How the left is mobilizing against Brett Kavanaugh, led by Clinton operative Brian Fallon:

More than 100 organizations have signed a letter demanding that no hearing date is scheduled for Supreme Court Nominee Brett Kavanaugh until all of his records from his time in the George W. Bush administration are turned over to the Senate Judiciary Committee.

Why it matters: The letter underscores the left’s aggressive efforts to put pressure on lawmakers to stall Kavanaugh’s confirmation and ensure that his past is properly vetted before putting him on the bench.

“Brett Kavanaugh likely has the longest paper trail of any Supreme Court nominee in history … The Senate has a right to see the more than 1 million pages of records from his time in the White House before any hearing is scheduled.”
— Brian Fallon, former press secretary for Hillary Clinton’s campaign and head of Demand Justice, tells Axios

The anti-Kavanaugh coalition is a who’s who of leftist activist groups: 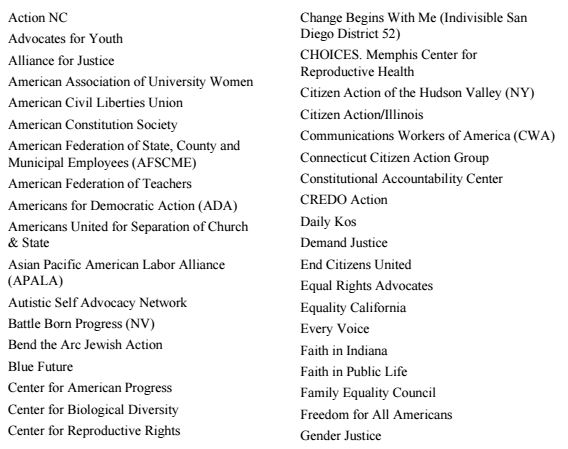 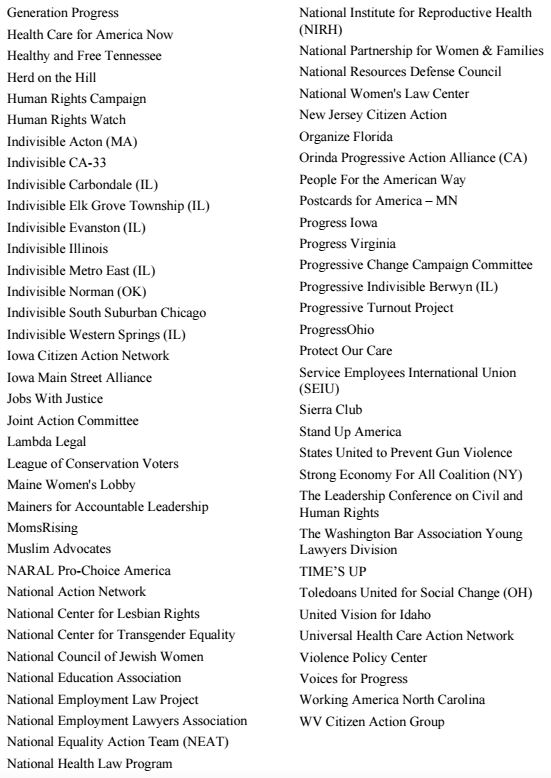 Kavanaugh is someone who is particularly hated by Clintonworld because of his involvement in the Kenneth Starr investigation of Bill Clinton in the 1990s, ‘Brett was involved’: Inside Supreme Court nominee’s work for Bill Clinton probe:

President Donald Trump has waged war on leakers — but in nominating Brett Kavanaugh for the Supreme Court, the president has picked someone well-versed in the swampy art of off-the-record briefings and anonymous quotes.

The questionnaire Kavanaugh submitted to the Senate Judiciary Committee on Friday acknowledges his exchanges with the media during his time on Starr’s staff. The submission also appears to acknowledge that he has sometimes spoken to reporters on a not-for-attribution basis.

In the questionnaire, Kavanaugh notes interviews for seven books — six of which focused at least in part on the independent counsel probe.

“In addition to the interviews listed above, I have also spoken to reporters on background as appropriate or as directed,” the nominee adds.

The judge also notes that he helped Starr prepare his own memoir.

How long before Clintonworld and others in the anti-Kavanaugh coalition revists James Carville’s infamous line about Paula Jones: “Drag a hundred-dollar bill through a trailer park, you never know what you’ll find”?

“”That hunt took on more urgency in recent days after a college-era writings derailed the nomination of Ryan Bounds to the 9th Circuit.””

Some of these little college punks are going to deeply regret the day they opened this particular box of worms.

Thanks to putative GOP Senators Scott and Little Marco for this.

“”the president has picked someone well-versed in the swampy art of off-the-record briefings and anonymous quotes.””

Well, if this doesn’t get the media and the Democrats behind him, nothing will.

Thank you for bringing Kavanaugh back to the spotlight. The left with their media engage in distraction (violence here and there) while building for war on a bigger front like SCOTUS.

The Blue Wave of Hate has one mission: Destroy the Constitution and rebuild the former USA as a Communist utopia. To them, it is war not a negotiation. Skirmishes like in LA are “fake landings” to get us to miss the main landing zone like SCOTUS.

Each round is more revolting than the last.

He seems to have been involved in a *ton* of interesting things, from investigating Vince Foster’s suicide to representing Elian Gonzalez’s American relatives pro-bono.

On a more random note, he’s committed to teaching a course at Harvard Law School in 2019 — and it sounds like he’d still teach it, even if confirmed. The course title: “The Supreme Court since 2005”. Can you imagine the protests on campus?

Nope. Having already died in the Kavanaugh Apocalypse, I am immune to the caterwauling of the Left on this subject.

Plus, I’m in the middle of dying for the Helsinki Apocalypse. Please don’t interrupt.

I thought it was the Net Neutrality Apocalypse that caused your demise.
Personally, I passed away during the Paris Climate Accord Apocalypse.

He may still evolve as a socially and/or fiscally liberal justice. Hope and change or something. The glass is half full.

Sadly Republican Presidents do not have a great track record of picking SCOTUS nominees who perform as promised once ensconced on the court.

An epidemic of absurdity.

Donald Trump has waged war on leakers — but … has picked someone well-versed in the swampy art of off-the-record briefings and anonymous quotes.

Quite a jump, there. A bit like saying, “Donald Trump has waged a war on nudists … but has picked someone who was once seen in public without a tie.”

Even when these guys are trying to shovel dirt, they seem to have trouble grasping the basic idea.

“Even when these guys are trying to shovel dirt, they seem to have trouble grasping the basic idea.”

I especially enjoy how the leftards are trying to make an issue out of something Kavanaugh never wrote. He never wrote that the courts should protect a President from indictment while in office. In fact he said the exact opposite. Judges couldn’t do that. Only Congress could. And that Congress should legislate that a President would be immune from indictment or lawsuits while in office.

It’s bizarre. The leftards are shrieking that Trump nominated Kavanaugh to protect himself from legal action when in fact Kavanaugh wrote that as a judge he wouldn’t have that authority. He wrote that only Congress has the remedy because he had second thoughts about being part of the Starr investigation. He wrote that while Ken Starr was and is a good man, the law that he operated under was deeply flawed. That he later realized that such investigations are too distracting and a President, any President, should be free of them. If Congress comes to a decision that a President has done something wrong the Constitution provides a solution; impeach him. Then as a private person he or she can be investigated and if they have committed any crimes then they can be prosecuted.

And Kavanaugh said this when Obama was the only one who could benefit from this advice. Who knew in 2009 that Trump would be elected in 2016, although once he was elected it was a done deal the leftards would wage lawfare against him.

As a matter of fact, if Kavanaugh did know all this 9 years ago it’s even more of a reason he should be confirmed. He’s omniscient.