Democrats Don’t Know Anything About Judge Kavanaugh, They Just Know They Don’t Like Him

Democrats Don’t Know Anything About Judge Kavanaugh, They Just Know They Don’t Like Him 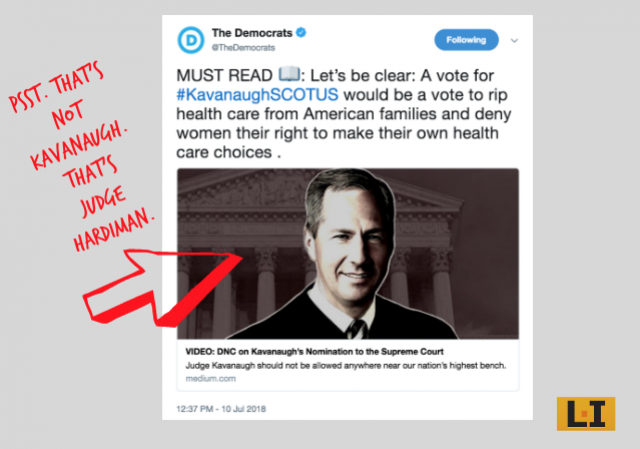 The meltdowns began with Justice Kennedy’s retirement announcement when Democrats and their media outlets began declaring the end of civilization and the beginning of Handmaid’s Tale Armageddon.

The White House was especially tight-lipped about Trump’s decision to nominate Judge Kavanaugh to the bench. But Democrats (at least lost with the loudest national platforms) aren’t concerned about Kavanaugh’s record or judicial philosophy, they just know they don’t like him or anyone else on Trump’s shortlist. 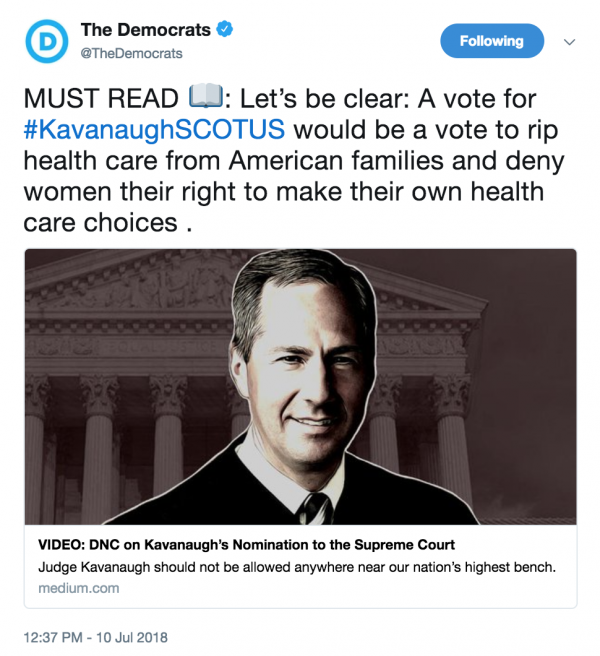 Oh, ok. Except, that’s not Judge Kavanaugh. That’s Thomas Hardiman. But carry on with your well-informed criticism.

“Gotta be prepared,” one protester told me proudly???? pic.twitter.com/s1yjx0hKOO

It’s fun watching the left pretend the judiciary makes laws. Judicial activism for me and not for thee! Or something.

All of the nominees on @realDonaldTrump’s short list would overturn #RoevWade and key healthcare protections.
That’s why the extreme right put them on the list in the first place. #WhatsAtAStake pic.twitter.com/BYRPF3BXI8

The Women’s March. Of course.

When you pre-write your press release slamming Trump’s SCOTUS pick but forget to add the name…. pic.twitter.com/5GiEJXMHUR

QOTD, “Is undoing past judicial activism itself activism?”

No, it’s not. It’s returning to the sanity of paying attention to the actual wording of our constitution, which is the actual job of the SCOTUS. And it’s about time!

Your QOTD is specious and smacks of sophistry. MAGA!

Some people believe it is a matter of simple competence plus restraint.

How does one interpret a law in light of the US Constitution?

First, you read the pertinent documents. That means the legislation and the relevant portions of the Constitution. Strangely enough, some people skip this step. Then, you read any pertinent precedent. Some people skip this step. They just do not like dealing with other points of view. These people are called “vulnerable.” Then, you apply the law to the facts of the situation. Some people do make up their own facts. This was Bob Bork’s problem, according to people in a position to know, and he kept his advisors from rebutting that charge. I never understood that decision.

Then there is the 9th Circuit, several of which do not even pretend to consult either the original documents OR the relevant law, OR precedent, and simply pull a result out of their prejudices. That, not their leadership, is why the 9th Circuit is so frequently reversed.

Are you really committed or concerned when you don’t bother to proofread your stuff before clicking send?

Video of a typical group of activists watching the announcement:

Handmaiden’s tale? We blood soaked sinners deserve far worse than ‘The Handmaiden’s Tale. For goodness sake we murder babies by the job lot, cut them up in butcher shops and sell them like the daily special.

Moloch never had it so good. Whatever reckoning we receive as a nation is richly due. To our undying shame our nation still allows this to go on knowing about Gosnell and PP’s murderous reign.

This is what they are most concerned about? To be able to kill their own children. How in the world can we ever reconcile with the left? How do you compromise with an unrepentant murderer?

Not that it matters but do these people know that Kavanuagh has to be joined by 4 other justices to do all these evil deeds?

Not just that. But the vast majority of SCOTUS cases are not 5-4 splits. Kagan, for example, voted with Scalia 74% of the time, as of 2014. I’d like to see updated numbers but I’m sure they aren’t far off from these.
https://www.nytimes.com/interactive/2014/06/24/upshot/24up-scotus-agreement-rates.html

has nothing to do with the proposed SCJ, it is the fact that Trump is nominating him/her

We have to go easy on the left. They didn’t plan for us to be around after Jan 27, 2017 because Trump was going to start WW III within a week. They have been playing by ear since.

Ditto with Sarah Brady’s wild-west gunfights in the street with concealed carry. If they say it, it HAS to come true. So as soon as Kavanaugh is approved, all hospitals will close.

While i am always happy to make fun of the Left, it certainly is true that the selection was made within a finite and known set of names. It is reasonable that The Left hated all of them. Therefore their position against any one name is logical, but they still need that name. Had President Trump picked a name not on the list (perhaps, in contradiction to this choice an actual reliable Conservative originalist), then our complaints about their intransigence and insanity would better resonate.

As it is, id be using my sharpie to write ‘Souter’ on my poster.

Whatever it is, I’m against it!
– Groucho Marx

“What are you rebelling against?”
“Whaddya got?”

President Trump could have nominated Jesus Christ or Mother Teresa and the demoncRATs would still not like the selection. The reason is easy: demoncRATs have found that having activist judges that are lifetime pickes and cannot be held to account by election may dispense political decisions that could NEVER be attained at the ballot box or from Congress.

But alas, we are beginning to ask why Judges and Courts should be able to rule with impunity when they were NEVER constructed to behave as legislators or presidents, e.g., https://www.nationalreview.com/2018/07/federal-district-judges-should-not-make-immigration-law-for-whole-country/ and https://www.conservativereview.com/news/the-one-court-precedent-that-matters-in-the-scotus-debate/