Going after SCOTUS nominee by digging for dirt on a family member. 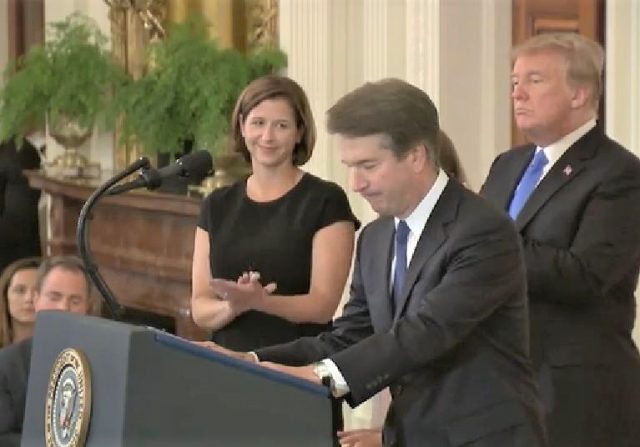 NTK Network reported today that The New York Times and Associated Press sought emails from Ashley Kavanaugh, the wife of Supreme Court nominee Judge Brett Kavanaugh, when she worked as “town manager of The Village of Chevy Chase Section 5.”

The publications requested these emails under the Maryland Public Information Act (PIA).

The left and media have Kavanaugh Derangement Syndrome since Trump made his announcement:

I guess since they couldn’t find anything juicy on the judge they’ve set their eyes on his wife Ashley. From NTK Network:

The two news organizations took different approaches to obtain the e-mails. According to the documents, the AP made a sweeping request for “all emails sent or received” by Ashley Kavanaugh’s Village of Chevy Chase email address.

By contrast, The New York Times is currently requesting that The Village of Chevy Chase Section 5 hand over “any emails to or from Ms. Kavanaugh that contain any of the keywords or terms listed below.”

And what a list it is, including words like “liberal,” “abortion,” “gay,” and “federalist,” while also explicitly asking for e-mails containing the names of certain individuals. 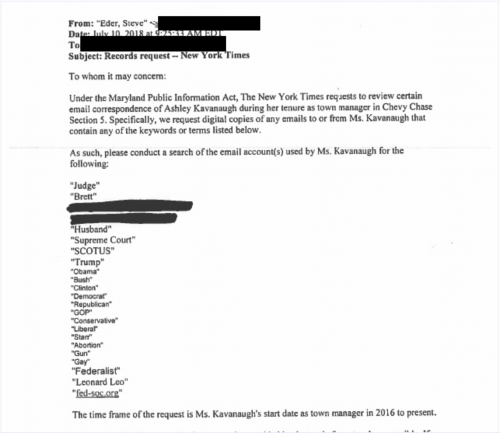 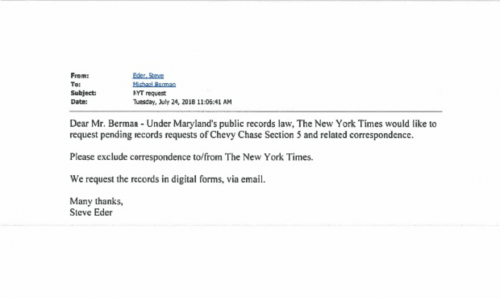 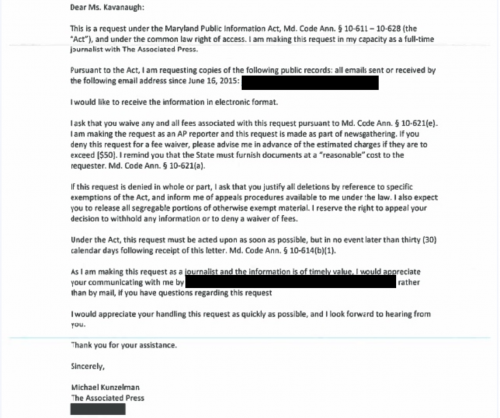 Heavy.com listed five facts about Ashley after her husband’s nomination. It looks like her “position is a non-partisan position, appointed by the Town Council.” Section 5 is very small with only 227 houses and one restaurant.

I have no idea why they would ask for those words from a town manager for such a small place.

Professor Jacobson blogged about how The New York Times Editorial Board encouraged “Democrats to go all Godfather” against anyone President Donald Trump nominated. The Editorial Board wrote:

I reached out to the reporters at The New York Times and Associated Press and asked for comment. As of now, I have not received an answer, but will update if I do.

What a shame they didn’t expend even a fraction of the effort to get Hillary’s emails on an illegal server.

As of now, I have not received an answer, but will update if I do.

Please do NOT hold your breath while you wait. We promise to not hold ours either.

What the heck is wrong with these people? I’d ask whether they have no shame–but first they have to have a clue, before you can get to the question of whether they have any shame. Mindless twits spewing poison dosesn’t begin to describe these “newsmen”.

What’s wrong with them? They are trash.

Yes, but above all: fascists.

Imagine if they had power over you.

Can you say zero chance of ever “growing in office?” Even if he was so inclined, this is going to make him completely unsympathetic to anything that has a “D” near it.

This has the stench of desperation.

Yet another signal to would-be nominees; we will turn your life into a living hell. No one in your family is safe.

Or a gun strapped to the back of a toilet tank in an old Italian restaurant will do.

…and why the courts should be a key voting concern in Every. Single. Election.

Hey, look, I agree with the NYT!

And that’s why we elected Donald Trump, instead of Hilliary.

What comes next, private investigators following the Kavanuagh’s daughters to their favorite fast food place, favorite singer they listen, if they own a cell phone and if they like broccoli or not?

Well, yeah. They have to figure out if the kids are addicted to Diet Coke, after all.

“I have no idea why they would ask for those words from a town manager for such a small place.”

Why? They’re looking for the proverbial pube on a soda can, of course.

They were not even curious about Clinton’s emails, or the Foundations business records.

can we request the emails of ALL NYT & AP employees family & friends ?

As easily foreseen, they’re not just looking for something they can portray as dirt. They’re going to try harassing the nominee’s family, spying on them everywhere, giving them the “in your face” treatment when they’re out in public, in stores, restaurants, concerts, sports games, libraries, at school, on vacation, everywhere they can find … all in hopes that Nominee Kavanaugh will finally ask for his nomination to be withdrawn. He may be ready for this gauntlet, but they’re banking on someone else cracking first.

Yet another reason to vote not Democrat is that they are immoderate, irresponsible, and unaccountable.

Funny, I don’t recall the N.Y. Times or the A.P. seeking out e-mails from the spouse of Justice Kagan prior to her confirmation.

Don’t believe she has ever had a spouse.

One thing we know for sure, Mrs. Kavanaugh did not have a bathroom email server. I pray God lets me stay alive long enough to see the NYT go belly up.

They should be careful what they wish for. Now, some poor soul is going to have to read that correspondence. Both of my last two homeowner’s associations were bigger than this entity.

If Thomas doesn’t retire under Trump then we haven’t locked in a Conservative court for a Generation.

ALso if you lose the Seante with the “new rules” you won’t get a vote from one Democrat for any Conservative nominee and we be forced to nominate a Kennedy AT BEST.

Just saying people need to do to Thomas what the idiot Left failed to do with Ginsburg who only needs to sit on the Court till she is 90 to outlast Trump’s second term.

Thomas could cement the court by retiring before 2020 since we will still have the Senate next term.

Good news is if they’re this desperate they must not have anything on Kavanaugh.

It’s time to have a work place shooting at the NYT and AP !!

How is this even legal?

Why wouldn’t it be?

Because Kavanuagh’s entire job was to advice President Bush on legal aspects of his policy decisions. If that’s no privileged than what is?

They can ask all they want. And they’ll get “NO” for an answer and like it.

You would get exactly the same answer from me if Hillary Clinton had been elected preezie (Shudder!) and some conservatives were trying this tactic. But in all sincerity I can’t think of any who would sink as low as these leftists.

I seriously doubt that Brett Kavanaugh was so careless as to tell his wife about his work. It was between him and other WH staffers advising the President as well as the President himself. What planet are these reporters from? Who emails their wife? You’re going to be going to bed together later.

OK, full disclosure, I did email my wife and she me after I was recalled to active duty following 9/11 and got sent overseas in support of Operation Noble Eagle/Iraqi Freedom. As the saying goes all gave some, some gave all. That killed my marriage. My Japanese wife somehow got it into her head that I had engineered my absence all by my lonesome, just because, and that a bunch of Arabs flying planes into buildings had nothing to do with it.

So as everything at home went pear shaped and I was seven thousand miles away my wife and I did exchange emails about the bank threatening to foreclose and the geyser in the front yard when the pipe burst and the dog trying to rip her arm off and several other divorce related items.

But Kavanaugh was born in D.C. He lives in D.C. or at least the environs of D.C. He was working in the WH for the period in question. Later he was a judge on a court in D.C.

I can’t think of a time when I emailed my wife when we were living in the same country and the same city and were regularly meeting face-to-face. Like, every night, which is certainly what Brett Kavanaugh and his wife do.

Who here is married and lives with their spouse and regularly emails them? I never did until it was too late, preferring to pick up the phone and call. Now that I’m divorced that’s what I do with the girls I date.

And when I was in the Navy I had a security clearance that was necessary for my work. I never sent an email to ANYBODY about my work. I can’t believe that Kavanaugh would have been any less discreet about his work at the WH. I could be wrong as I never underestimate the potential of human stupidity (the Naval Intelligence motto: “in God we trust, all others we monitor”). But my instincts are telling me the AP/NYT is mining an empty shaft. And that they’re not going to get what they demand when a law enforcement agency would need a search warrant.

The vast majority of government records are supposed available under the Freedom of Information Act. In theory, all you have to do is submit a request and pay the cost of reproducing the records.

I’m pretty sure this was the primary motivator for Hillary setting up her homebrew server… she wanted to enrich her corrupt self but didn’t want the little people to be able to see what she was doing.

I still get a chuckle every time I think about that vile witch melting down on election night.

“…I still get a chuckle every time I think about that vile witch melting down on election night.”

Yeah, that still gives the warm-all-over feeling of drinking hot mulled wine by the fireplace as a storm rages outside combined with opening presents on Christmas morning plus winning the trifecta at the track while also winning the lottery and going on vacation.

Is that how it makes you feel? Added bonus: the hag is apparently running again. The gift just won’t f’n stop giving.

Mrs. Kavenaugh is such a winsome sweetheart…they are going to do nothing but build sympathy for the Kavenaughs and revulsion for themselves by attempting to criminalize such a Suzy Homemaker.

I did not realize she had also been nominated to the court ..good to know…got to try harder to keep up

Almost makes me want to do a public records request of my congresscritter’s email and include as a keyword list the index of the urban dictionary.