California dominated the night, but take a look at New Jersey and Montana…

June 5 was the most important primary night for 2018 with a handful of states hitting the polls. Most eyes stayed on California since the state has a crazy jungle primary, which means the top two candidates will land on the ballot even if they’re in the same party.

It looks like the important House races in California remain undecided and we won’t have an answer for days, which means the GOP could still shut out Democrats in those districts. The Democrats also had a huge blow on the governor’s ballot as a Republican grabbed the second spot over a former Los Angeles mayor.

What about other states? Here are a few key points I put together from a crazy night.

I mentioned the key House races earlier, but let’s look at the governor’s race, which ended up with a Democrat vs. Republican. Favorite Lt. Gov. Gavin Newsom took the the top spot in the primary while Republican John Cox secured his place on the ballot after he coasted past former Los Angeles Mayor Antonio Villaraigosa.

This came as a shock to many, but Villaraigosa could not “recapture the magic that led to his two terms as mayor of Los Angeles” or gain enough support from “Latinos, moderates and lower-income Californians.”

Real estate investor Cox hails from Illinois where he ran for the House and Senate, but never made it to the primary. He spent $5 million into this election, but his name really took off after President Donald Trump tweeted support for him.

Now for the House races. The closely watched ones in Districts 39, 48, and 49 may not have the results for days and maybe even a week or two. From CNN (emphasis mine):

As of early Wednesday morning, CNN projected that in California’s 49th District, where Rep. Darrell Issa is retiring, one Democrat will advance to the general election, avoiding a shutout for the party.

Election officials still must count huge numbers of vote-by-mail and provisional ballots. A printing error in Los Angeles County that left 118,000 voters off the roster created further suspense — particularly in California-39, which is represented by retiring Congressman Ed Royce. 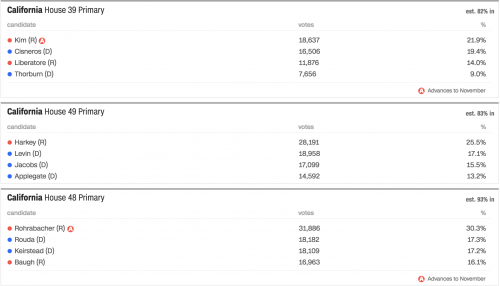 Even if Democrats avoid a shut out in November in those three races, they still have to face a Republican in November.

CNN didn’t mention the 10th district, which is another seat the Democrats want to flip. Incumbent Jeff Denham came out on top, but Democrat challenger Josh Harder is barely holding onto second over Republican Ted Howze.

To the shock of no one, incumbent Sen. Dianne Feinstein coasted to the top of the Senate primary with 43.9% of the vote. HOWEVER!!! It looks like Feinstein may have a Republican challenger in November since James Bradley is barely behind state Senator Kevin de León.

How about embattled incumbent Democrat New Jersey Senator Bob Menendez? Yes, he won his primary against Lisa McCormick, but it was too close for comfort. From NJ.com:

McCormick, a virtual unknown who did not report spending any money on the race, received the support of almost 4 in 10 Democratic voters.

While Menendez, D-N.J., was never seriously threatened with losing his party’s nomination for another Senate term, his performance wasn’t a good sign coming on the heels of his Senate Ethics Committee admonishment and a criminal corruption trial that ended in a hung jury before the charges were dropped.

“This is closer than we expected, but only because we expect huge margins for candidates with as much party and institutional support as Senator Menendez has,” said Matthew Hale, a political science professor at Seton Hall University. “In most places, a 60/40 win is considered a drubbing.”

Former pharmaceutical executive Bob Hugin won the Republican primary with 75% of the vote. Menendez may find relief that “200,000 more Democrats than Republicans went to the polls.”

I blogged last month about how Menendez held only a four point lead over Hugin in a poll from Fairleigh Dickinson University.

Republican State Auditor Matt Rosendale won his primary and will take on Democrat incumbent Jon Tester in November, who is considered one of the most vulnerable since Trump dominated the state in 2016. From Fox News:

“The battle of the ox has finally begun, tonight we are one step closer to defeating Jon tester,” Rosendale said. “This is not a victory speech we have to earn that we have to go through to November and that’s when we will come back and give the victory speech.”

The upcoming race between Rosendale and Tester is expected to be under a contentious spotlight. President Trump vowed to make Tester pay for sinking his nominee to lead the Department of Veterans Affairs. Trump’s remarks brought an influx of cash to fill Rosendale’s coffers for his campaign.

“I’ll fight for more freedom and prosperity for all Montana, we need to send trump some conservative reinforcing that will end the liberal constriction,” Rosendale said.

…and the resulting California general election will be filled with Dem. politicians saying exactly two things:
– My Repulsive opponent is a terrible person! Evil!
– Here’s some free money. There’s more where that came from.

And the Democrats midterm election slogan will be 6 words long.
“You want it? You got it!”

Cox spent 5 million and Newscum spent 39 million. Everything they threw at Cox went unheard. I think it might have just had the opposite effect.

notamemberofanyorganizedpolicital in reply to My2centshere. | June 6, 2018 at 3:01 pm

They sure are counting on an extremely high ROI when they get to be DC Congress Critters, no?

In the CA-4 race McClintock (R) finished the night with a healthy lead over the next 2 Dem challengers (the numbers I saw for them do not add up to cover much of his lead).

A fly in that ointment is that one county in that district did not have enough ballots printed to cover the election day voting, some precincts began running out at about noon. As of last night the count was only 6 of 40 (or 42) precincts went the distance (had enough ballots to serve all who showed up). No solution has been offered as yet.

The county usually goes pretty strong R, so if there are state races with slim margins the votes that didn’t happen might matter. The county has only 40K people and not all of them are old enough to vote. Yeah, there are places like that in CA, still. How and why this happened is yet to be determined.

Virtually all the county employees are registered democrats and take directions from the party rather than the county commissioners. Any voting problems are by design.

Having seen these rascals in action before, I have to go with Hanlon’s Razor until actual proof emerges. If there is skulduggery afoot, it is more likely to keep an “old guard”, that is not necessarily Dem, in place.

Warning signs in Missouri for the GOP.

The state senator for my district, a Republican, resigned earlier this year to take another job. We had a special election yesterday to fill his seat. Note that after Governor Greitens resigned, we still have a Republican governor and a veto proof Republican state legislature. In theory, not much was at stake in yesterday’s election. Yet, the D won it by about 20 points with turnout above what the “experts” had predicted.

Trump won the district by five, but he won the whole state by 18. When Roy Blunt ran for Senate, he won the state but lost this district to the Democrat, Kander. So it really is a swing district.

In yesterday’s election, both were good candidates and solid retail politicians. They were both getting out to meet the public at events. Both had outside groups running ads for them on TV. I got flyers from both candidates almost every day for the last week. So it was pretty equal campaign in terms of getting their message out.

I personally subscribe to the “peace and prosperity” theory of politics. That is, voters won’t make big changes to the status quo provided the economy is doing well and we are not at war.

The way I see it, the economy is strong and Trump has been restrained in his use of military power. So I had believed that the GOP would probably lose several seats, but they’d end up holding the House and probably picking up a couple of seats in the Senate in Congress this November. But Democrats don’t seem to care about the peace and prosperity. They are energized.

One large caveat to keep in mind. The local media have saturated the news about former Governor Greitens scandals almost from the time he was inaugurated. We’re all sick of it and glad it’s over. But swing voters in this swing district may have used the election to express their anger about that scandal.

However, Scott Walker has been sounding the alarm in Wisconsin, so while I’m sure Greiten’s problems were a factor, I doubt they were the deciding factor last night.

At any rate, national Republicans and Republican voters are on notice. The GOP better figure out a way to get their voters as energized as the Democrats are. The Dems don’t care about the peace and prosperity that’s been delivered. They only seem to care about power. They want power.

Power is all the Democrat politicians, and most of their voters, have cared about for decades (for politicians at least since the 1932 election).