FOUR of the Democrats lost to generic Republicans.

We continue to keep a close eye on polls for the midterms coming up in November because 2016 taught us THAT ANYTHING COULD HAPPEN.

An Axios/SurveyMonkey poll came out today that shows five Democrat senators losing if elections occurred today. FOUR of them lost out to unnamed Republicans in the polls.

The GOP only holds a one seat majority in the Senate. It wouldn’t take much for the Democrats to take back the Senate.

Except…Democrats have to defend 10 seats in states that President Donald Trump won. This is probably why the party has decided to concentrate more on House races than Senate races even though the majority is right there for the taking. 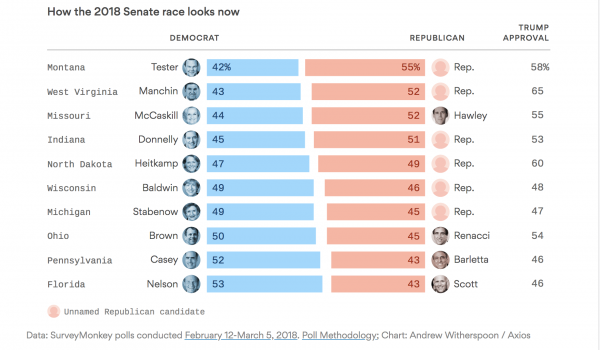 At the end of December, Politico ran an article that listed the top Senate races to watch in 2018. The list included some of the ones that lost in the Axios poll: Joe Manchin (D-WV), Jon Tester (MT), and Claire McCaskill (MO).

Manchin is probably the most vulnerable, especially since Trump’s approval rating is 65% and the state cheered when its governor switched to the GOP. Manchin is the most conservative Democrat senator. When he decided to run for re-election in January, “he repeatedly expressed his frustration” to Minority Leader Chuck Schumer (NY) and other colleagues about the dysfunction within the chamber and their intolerance of moderate lawmakers. He told them that “[I]f people like me can’t win from red states, you’ll be in the minority the rest of your life.”

It appears that some agreed, including Schumer, who “has made no apologies for his efforts to protect Democrats from conservative states.” After Trump won, rumors circulated that he eyed Manchin for cabinet posts, which led Schumer to offer the senator “plum committee assignments.”

Indiana Senator Joe Donnelly expressed happiness that Manchin decided to run again, but he has some problems of his own. He lost to a generic Republican in the poll by six points and Trump enjoys a 53% approval rating in the state.

Now look at the other five Democrat senators. Yes, the poll shows them winning, but none of them have comfortable leads. Wisconsin’s Tammy Baldwin only won by three points over a generic Republican, which “is underscored by outside conservative groups that have already spent millions of dollars in attack ads against her.”

I’m kind of shocked Axios put Ohio Sen. Sherrod Brown as one of the least vulnerable. He won in the poll by five points over Rep. Jim Renacci, but Trump’s approval rating in Ohio is at 54%. Something tells me that Brown won’t (or shouldn’t) think he has the election in the bag.

It just seems like poll after poll shows us that not only will the GOP keep the majority in the Senate, but actually unseat some incumbent Democrats.

Then again…do any of you guys fully trust the numbers? As much as it fascinates me, I find myself leery about numbers and polls after November 2016.

If the numbers hold, the bottom line for the rinos will be: President Trump and his kept promises (plus those yet to be fulfilled) have long legs. MAGA! (not to mention: in your face, rags!)

To the rinos, never-Trumpers and lefties out there (sorry for the redundancy), too bad you’re on the wrong side of history and too anti-American to know it.

That is what they said on the Titanic just before ……….

You probably don’t know what happened next. The Titanic completed its record breaking passage and the White Star Line became great again.

The claim that the Titanic and its sister ship the Britannic sank were fake news.

Democrat senators losing if the election were held today. Fats Domino had a song who title expresses my view: “Ain’t That a Shame.”

Am I leery of the upcoming election? I am, indeed. Who knows what’s going behind the scenes.

DieJustAsHappy, time of course, will tell. As long as the lefties tout gun control, repealing the tax cuts and their other anti-American rhetoric, the odds look better for conservative gains in the fall. I remain hopeful. If the economy keeps improving, which I believe it will, and the renegotiation of trade agreements goes apace, the odds will get better. The results in Texas are a helpful omen.

You’ve an optimistic note and not without reasons. It’s what the other side might attempt, including fraud, court actions, and a MOAB from Mueller right before the election, for example. In other words, I hope nothing is being taken for granted.

Trouble with any poll showing a generic party member of any party winning is- there’s nobody named generic. Pennsylvania’s 18th is a prime example. Should be a Republican slam-dunk. Except from what I’m reading the Republican candidate is as active as a bowl of Jello. Can’t win if you don’t campaign.

I always trust the numbers.

I never trust the polls.

I don’t trust the polls or the politicians, lol.

What I find amazing is that Dems have doubled down on the kind of stupid which they did which cost them the last election.

What pisses me off the most is that liberals have so changed the landscape. Who wants to talk politics year round other than those fascist liberals?

It’s not that the fascist liberals are the only ones that want to talk politics year round. It’s that they’ll do everything they possibly can to keep opposing viewpoints from being talked about or presented at all in any venue or fashion. Not only including threats of violence, but as we’ve seen, actual violence, aided and abetted by liberal politicians ordering police to stand down.

Manchin proved himself a liar. Running as a blue dog democrat he pledged he would be a centrist. Once he got in he voted party line as enthusiastically as Durbin and Schumer. Any comments made before a vote are meaningless. It’s their actual votes that determine their enthusiasm, and Manchin was first obama’s and then Schumer’s beeyach.

Purging McCaskill and Stabenow would be delightful.