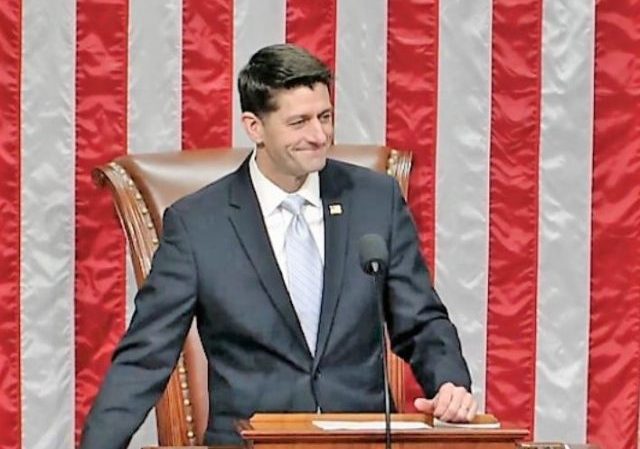 The House of Representatives has passed the tax reform bill again sincethe Senate stripped two provisions in the bill because it violated Senate rules and removed the title of the bill. 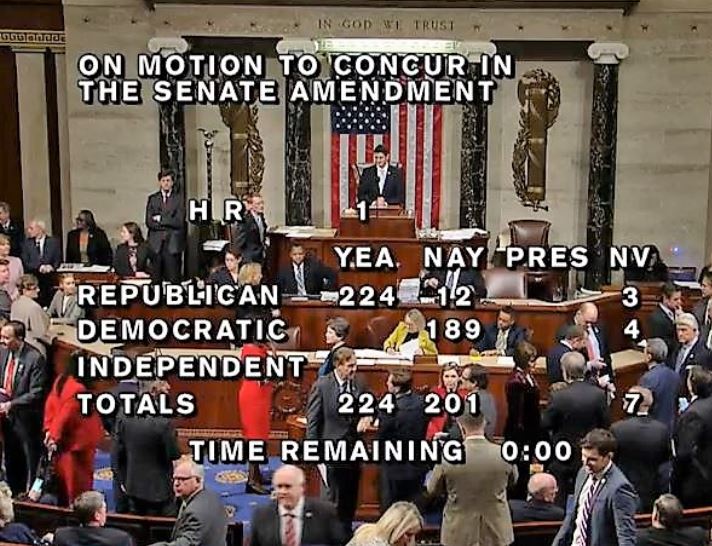 Trump said on Twitter he will hold a news conference at 1PM ET if the House passes the bill again. The White House will host a bill-passage event at 3PM with some members from Congress:

Press secretary Sarah Huckabee Sanders says that after the tax bill passes, there will be a “bill passage event” (as distinct from a bill signing) at 3 p.m. at the White House today with members of the House and Senate.

She adds: “This is not a signing event as the bill would still need to be enrolled and that will happen at a later date. We will keep you posted on details as they are confirmed.”

“Enrolled” refers to the completion of the steps needed to pass a bill, including being passed by both chambers, printed on parchment, and signed by House and Senate officials.

We do not for sure yet if Trump will sign the bill today due to a technical issue. Bloomberg explained:

Under the so-called PAYGO law, automatic cuts to Medicare and other spending categories would be triggered by the tax bill in January because the bill is scored as increasing the deficit by $1.5 trillion over ten years. Waiting until January means that those cuts would be delayed until 2019, according to budget expert Ed Lorenzen of the Committee for a Responsible Federal Budget.

Majority Leader Mitch McConnell and Speaker Paul Ryan have vowed that the cuts would not be triggered. They will need Democrats to waive them this year, however, since doing so would require 60 votes in the Senate. Nearly the entire House Democratic caucus last week threatened to block a PAYGO waiver unless Republicans made concessions like restoring the Obamacare individual mandate.

Exciting. Like a tennis match, but without as much excitement.

I was going to say more like the Girl Genius snail races, but…

Or a golf tournament without the violence.

EU has threatened to sue to block it.

The Germans are smart enough to realize that this a a body-blow to them:

I wouldn’t be surprised if they sued in the Hague. And Ambassador Halley tweets them into slinking back into their holes.

How is that judge in Hawaii dealing with it?

He’s probably not in the office yet. But he should be in shortly and will put a stop to all this foolishness.

Golf is overrated. The holes should be moving.

Including a small piece of ANWR in this bill is actually a Big F’ing Deal, even if it doesn’t seem like it at first. Dems have been fighting for 30 years now to guarantee that NO wells are ever drilled there, but they have never been honest as to why they were demanding such a total ban.

Here’s why – almost every oil exploration geologist who’s looked at the region has concluded that the geology there is just as promising as the geology in the North Slope, which revolutionized the American Oil Industry in the 60’s. By never allowing wells to be drilled there, the enviros have made sure that these reserves remain theoretical, not proved.

They fear what will happen if even a few wells are allowed – that these wells will provide proof that there is a HUGE amount of untapped oil underneath those plains, enough to supply this countries energy needs at low cost for the next 30 to 40 years.

And now, thanks to this bill, we may finally get to see the proof.

This may actually lead to an major tax reduction [actually, an increase in their rebate, or a “negative income tax”] for Alaskans, as oil income increases. Even with unit prices down [too bad, OPEC], the volume could be enormous. So it belongs in the tax bill.

It would also be a major hit to terrorist-supporting states in the Middle East. Win-win-win. And that’s just a start.

Given Alaska’s fiscal state, it will be a long time before the citizens see anything but new taxes. Not many folks talk about welfare reform up here, but they should. Welfare in its many guises is costing the state billions. Most of the State is exempt from the old GOP/Clinton 5 year limit on benefits.

It’s so great to see every single democrat in congress vote against tax cuts. And they say the Republicans are the stupid party. LOL!

I will admit that I was surprised that the Republicans actually passed a tax reform bill this year. I would have expected them to drag it out until next year to avoid spending cuts in an election year. Reading that Paygo would not kick in until 2019, if the bill was not enrolled until after January 1st 2018, makes it a little clearer why this happened now. If Trump holds-off signing the bill until 2018, then the Republicans get the benefit reduced taxes in 2018 without reducing spending prior to the 2018 midterms. And, they can still point to having passed the bill in 2017. Now we will have to see when the Prez signs it.

Well, the NPR station has an “analysis” of the budget that tells how only the very rich will benefit from this budget, and how it will be bad for the 99% over the next 10 years.

Oh, yeah, and DJT’s admittedly credible economist is just wrong about it all.

Yup. And they wonder why half the country wants to stop giving them government funds to carry the Democrats’ water.

Wait until withholding goes down in Feb or Mar, and working people realize that they just received, for all practical purposes, a pay raise. They might start questioning their trust of NPR…

I get the 12 R’s voting nay – Blue State reps that have to worry about the SALT deduction being capped affecting their re-election chances. So be it – this is the way its supposed to work, we had the votes to pass, so we let them vote Nay to increase odds of keeping their seat.

What’s hilarious is the D’s voting UNANIMOUSLY against in both House and Senate.

They actually think this bill is going to be an albatross around our necks, like Obamacare was for them. LOL!!!