Senate Passes Tax Bill After Debating for Over 10 Hours

Senate Passes Tax Bill After Debating for Over 10 Hours

Now back to the House for a revote. 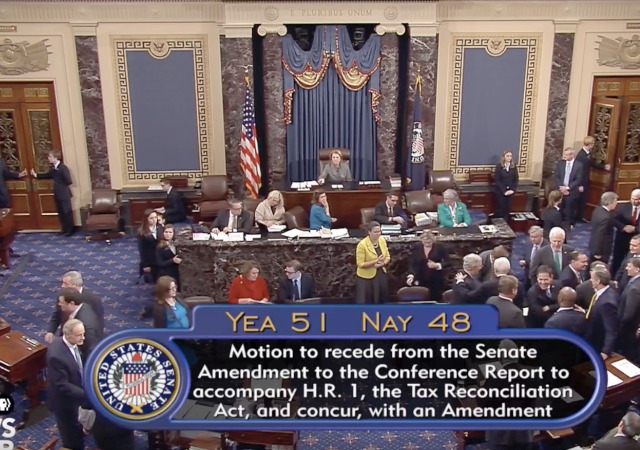 The Senate has passed the tax bill by a simple majority, 51-48. However, before it goes to President Donald Trump, the House must revote on it due to a few provisions that violated Senate rules.

Sen. John McCain (R-AZ) did not vote since he has returned to Arizona following a round of treatment.

Sen. Susan Collins (R-ME) and Sen. Mike Lee (R-UT) came out today as a yes, which means the bill should pass along party lines.

Yes, Democrats. The middle class will receive a tax cut. Congress’s Joint Committee on Taxation said that those in the middle class “will get $61 billion in tax cuts in 2019.” From The Wall Street Journal:

Businesses have also found some surprises in the bill, especially with the corporate tax rate going down to 21% and the elimination of the corporate alternative minimum tax. From WSJ:

The rate takes effect on Jan. 1, a year sooner than proposed in the Senate bill. That promises firms an extra year of lower tax and avoids a delay that worried many tax experts.

“The level of gaming that would have occurred if you would have had a 35% rate in 2018 and a 21% rate in 2019, it would have been truly amazing,” said Steven Rosenthal, senior fellow at the nonpartisan Tax Policy Center think tank.

The Republicans seem remarkably aligned on this. Either they’re all smart enough to recognize the benefits of supporting this bill (*cough*), or Mueller’s latest antics have reminded them that the D.C. swamp is a bigger danger than Pres. Trump.

I guess we found Nancy’s protesters. They thought shrieking mindlessly like a toddler throwing a tantrum was going to stop the vote.

Even their paid topless protesters couldn’t stop this bill from,passing.

I still do not understand topless protestors. Once you are jumping up and down topless, the only thing anyone will think then or remember later is that you were topless…

In today’s current gender equal environment, is it sexual assault or harassment to whip out your boobs during an attempt to intimidate a man such as exhibited yesterday to Sen. Cruz? Would it be different if a group of males were bottomless and did the same to female Senators or celebrity?

The debate was over before the bill went to the floor. I swear, we could get more mileage out of the House and Senate if we gave them a soundstage to make their preening campaign speeches and let the floor of the respective chambers be used for actual debate.

the funny has only started, people need to record the Democratic reactions to this, and start using them in political ads when the 2018 election season start. just think of all the Democrats that will be calling to raise taxes on the rich, when the republican got a half arse start, they can hit them with nice videos from today.

So, roughly HALF of this tax cut goes directly into the pockets of the middle class.

Given that corporations pass on their tax expenses to whoever buys their products, the reduction of the corporate tax probably goes mostly into the pockets of the middle class also. Indirectly.

And the Democrats are voting unanimously against this??

They actually think this will be unpopular and that they’ll be able to run against it.

So half in to the middle class and the other half in to fat cats…who rather inconveniently for the left are the very people who provide jobs for the majority of people who pay no taxes.

Secondly, I wonder when someone from the mfm will ask Democrats the rather inconvenient question of why they hate Americans so much they want to impose higher taxes and destroy jobs and security by opposing tax cuts?

Finally…how many deaths are we meant to see on the passing of this bill? Was it 20,000?

All of the people who died when president Trump got us out of the Paris climate treaty will die a second time, it’s terrble.

Oh, I am sure some judge in Hawaii………you know the rest.

To Liberals, allowing American taxpayers to keep a little more of their own money is an existential threat.

Are both chambers voting on the same bill, or do the two bills need to go to conference now?

The most important thing is that Mary was able to get to sleep at a decent hour.

As a CA resident, I contacted my Rep, Mimi Watters and told her to vote for this bill. Now as a CA resident, I will need to move. Still happy with lots in it, even if only for individual mandate repeal. That made it, right?