In his remarks, Sessions announced more protections for free speech on campus. 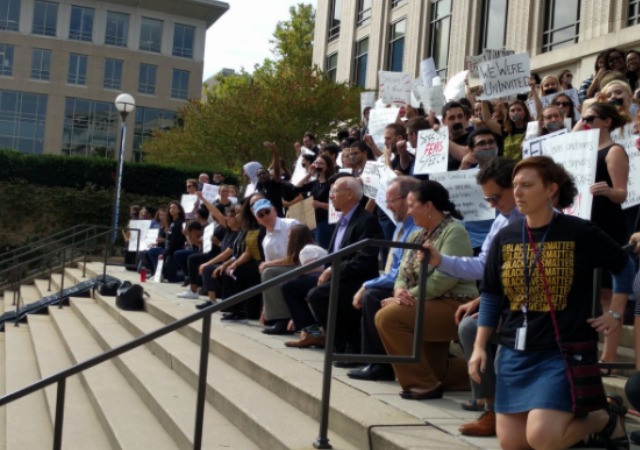 So it looks like the left has embraced the idea of using #TakeAKnee to show its opposition to President Donald Trump and his administration without taking into account the perception it gives.

Georgetown Law School faculty and students decided to protest a free speech event by Attorney General Jeff Sessions by taking a knee. Yes, Sessions’s speech was about how free speech has eroded on campuses and that the Department of Justice plans to provide protections for speakers.

Thirty law professors at the university released a statement that decried the hypocrisy of Sessions holding a free speech since Trump has railed against the NFL and NFL players who choose to kneel during the national anthem. Students also joined the law professors. From The Washington Examiner:

Referring to Sessions as a “fascist,” one student group called the Georgetown Young Democratic Socialists of America revealed its plans on Facebook to “ask disruptive questions during Q and A and try and shut him down.” Protests will likely be restricted to outside the venue as the guest list appears to be invite-only, contained to students who previously signed up to attend the Center’s events and student’s in the moderating professor’s classes.

A Georgetown attendee told the Washington Post that some students “find it extraordinarily hypocritical that AG Sessions would lecture future attorneys about the importance of free speech on campus while actively excluding the wider student body.”

So yeah, they’re ticked because the speech supposedly happened in front of a pre-selected audience. But they admit that they would do nothing but shut him down:

I could cite the numerous times protesters have caused disruptions at colleges, but I won’t because then I won’t have any room left in this blog. Considering previous actions it’s not a shock that Sessions and the university took this route.

But yes, let’s show how much we hate him by kneeling:

Georgetown Law faculty arrives to take a knee in protest of Sessions’ appearance on campus. pic.twitter.com/aOEaUgAQAJ

Someone needs to remind these people what this looks like:

They do know that kneeling is a sign of submission, right?

Wow , the Georgetown law faculty are bowing and taking a knee before Sessions.They are surrending to Sessions .

Weird world we live in where you get angry at a man and then kneel before him. That’s a universal show of respect, not protest.

Ironically, Sessions’s speech was about the Department of Justice offering more protections for free speech on campuses. From CBS News:

“The university is about the search for truth,” Sessions said Tuesday. “Not the imposition of truth by a government censor.”

In his prepared remarks, the attorney general said, “Freedom of thought and speech on the American campus are under attack.”

“The American university was once the center of academic freedom—a place of robust debate, a forum for the competition of ideas,” the prepared remarks said. “But it is transforming into an echo chamber of political correctness and homogenous thought, a shelter for fragile egos.”

In his prepared speech, Sessions called for university officials and faculty members to “defend free expression boldly and unequivocally.” He said that a “national recommitment to free speech on campus is long overdue,” as is action to protect First Amendment rights.

Sessions brought up a survey from the Foundation for Individual Rights in Education of 450 colleges and universities which showed him that at least 40% of them “maintain speech codes that substantially infringe on constitutionally protected speech.” He continued:

“But who decides what is offensive and what is acceptable?” Sessions said. “The university is about the search for truth, not the imposition of truth by a government censor. Speech and civility codes violate what the late Justice Antonin Scalia rightly called ‘the first axiom of the First Amendment,’ which is that, as a general rule, the state has no power to ban speech on the basis of its content.”

Sessions did not offer any details on the DOJ’s plans or how it will enforce free speech on college campuses, but said a brief will come out this week.

Wow, look at the sacrifice they’re willing to make for the cause. Kneel down, get back up. Impressive.

notamemberofanyorganizedpolicital in reply to Whitewall. | September 26, 2017 at 2:45 pm

Those Commie-Leftist-Democrats do not understand anything.

Kneeling is ALWAYS the position of DEFEATED ENEMIES!

The kneeling protesters should all be familiar with the “Kneel before Zod” line from the original Superman movie. More recently, they should be able to recall the scene from the first Avengers movie where Loki demanded that a crowd kneel before him, or else. Yet somehow in recent days or weeks kneeling is now supposed to be seen as a sign of protest. Curious.

I wonder what the graduation rate is at Georgetown Law?

The little fascist brigade of useful idiots marches on. Resist!

Speaking of idiots – and the pot calling the kettle black:
“Clinton Compares Trump to Putin: ‘Hopefully He Hasn’t Ordered the Killing of People and Journalists’”
http://freebeacon.com/politics/clinton-compares-trump-putin-hopefully-hasnt-ordered-killing/

This psycho will do anything to get attention. She’d take a knee – if she could.

WHEN IS CLINTON BEING INDICTED??

When her friend of decades, Donald Ducks, makes it so.

Can we get some bus passes for their grandparents to come visit and smack the living crap out of them?

This doesn’t bother me because they are not kneeling for the national anthem or directly disrespecting the flag. What it does is underscore the vast chasm between the way the left and the right think and see things.

The left now sees (mostly) minority ball players kneeling during the national anthem as a matter, solely, of free speech. They’ve long held, when it benefits them, that First Amendment protections extend everywhere. For them and no one else.

Anyway, the left is digging in on free speech (oh irony of ironies), while the right, from the president on down, see the kneeling during the national anthem as an insult to our nation and to our military.

One of the things the left excels at is changing definitions, shifting goals, and making up new rules on the fly. Note this take a knee stuff started as a BLM-linked, anti-American protest (America is racist, its cops “hunt” black people, so the American flag and anthem will not be respected), but now the left has morphed it into either a stance against “white supremacy” and Trump or a free speech matter.

They can bow down all across the nation for all I care. One of these days an unfortunate photo will go viral showing counterprotesters standing in front of them, facing them, and that will be the end of that. They may then decide to burn the flag or poop on it (a favorite of the left) en masse from doctor’s offices to college campuses to the deserted sports arenas across the country. Or some other equally overt expression of their true target in all this.

At which point, everyone will be crystal clear that this is not about free speech or hordes of nonexistent white supremacists hiding under every bed and is all about destroying the United States of America.

From a practical standpoint, this is good news. It’s much harder for an oh-so-radical to clock someone in the head with a bicycle lock while he’s down on his knees.

It’s also a lot easier to kick them in the face.

It’s more than disturbing to me to see so many future lawyers squarely in the anti free speech camp. This does not bode well for our country

Bingo. That’s my concern as well.

I’m also concerned that Sessions is giving speeches instead of responding to subpoenas and requests to appoint special counsels to investigate known criminal behavior by the previous administration.

“not the imposition of truth by a government censor”

Or increasingly, the imposition of “truth” by private administrative censors like facebook, twitter, google, youtube, and others. These nanny-staters have stepped into the breach, becoming Children of the Corn, acting as they themselves are the state, treating their users as if they’re nothing more than subjects to be controlled.

And so it is time for them to meet their maker: regulate them like public utilities.

As usual, they want “free speech” for themselves, but even t he slightest hint of disagreement is somehow the End of The First Amendment or something.

One would expect learned Fascist-Progressive Professors and Students to know that anyone – even Presidents – can have opinions different from their own and that they are free to make their arguments against them if they so choose, and to do so in the very same public spaces they use.

Yet, according to them, that is now “Fascist”? Really?

How many of these protesters are tenured academics? Do they understand their tenure exists for them to exercise their right of free speech on academic issues without being summarily dismissed for having voiced unpopular ideas. In other words they seem to want protection of their speech while denying it for others. Tenure was not intended to be a guaranteed income protection scheme, regardless of work effort, until retirement.

If they ever do that in front of Trump he should make the sign of the cross like he’s the Pope.

The Kaepernick thing isn’t just free speech. It is also appropriate time and place related. If I hired a contractor to install a new pool in my backyard, and one of the employees was a social justice warrior, and every time I walked by they felt the need to comment on my financial wealth, I would be unhappy. I would say something to his boss. If he was warned, persisted, and was fired, that would not be a free speech issue. The same person could stand on the sidewalk in front of my house and holler as I came and went, that would be free speech. Are people denying the plight of the Black community, victims of President Johnson’s “War on Poverty”? No. Why do so many blacks commit violent crimes and engage in drugs?

That knee thing is adorable while projecting a serious and sound and mature mental attitude.

Actually, I’m jealous of their ability to get back up. My own legs do not work very well anymore. What a bummer! If I did that knee thing with my chums then they’d have to help me back up. Similar situations happen every day, dropping things, opening doors, carrying things, falling into furniture, and you wouldn’t believe how helpful everyone is. Perfect strangers move in to help. Young people are impressive this way. Very situationally aware. They’re not anything like how they’re described online.