Liberals Suggest Kneeling Down Should be the New Protest Against Trump

Liberals Suggest Kneeling Down Should be the New Protest Against Trump 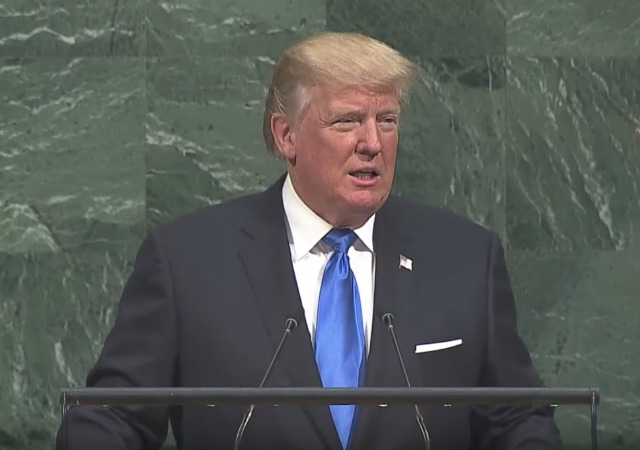 Is anyone else not shocked that liberals have suggested this and miss the irony of the idea? Yeah, me either.

Yes, there are some liberals using social media to suggest that kneeling down become the new protest against President Donald Trump.

As we all know, some NFL players have been kneeling or sitting during the National Anthem to protest against police brutality and social inequality. Well, things got upped a notch or two this past weekend after Trump lashed out at those NFL players.

So on Sunday even more NFL players took a knee while three teams chose not to even attend the singing of the National Anthem.

With so many NFL players taking a knee against Trump, a few liberals think this is a great idea.

Oh my lord, Trump has tricked his critics into kneeling before him. pic.twitter.com/5YeWiyAUtn

The kneel will now become a sign of opposition to Trump.

If kneeling is a sign of opposition to Trump (and I do like this non-violent approach) I’ll be on my knees all day.

If kneeling during the national anthem is going to be the sign of Trump opposition, just give him the 2020 election now and be done with it. https://t.co/mdUKN8QJ83

That should work great on election day https://t.co/IZbh1aE6Wp

Unless you’re an athlete, the problem with kneeling is getting back up.

That’s what Geritol or Vitameatavegamin is for; take your pick. (grin)

That and the leg cramps.

I’ve often knelt for the national anthem, having fallen while trying to stand up for it.

That’s a salient metaphor to stand, not kneel, on principle.

The left must destroy American football and American baseball to further their global one-culture agenda. European cultures are nearly destroyed so the experiment needs to be expanded to the USA. The idiots who make their 1%er salaries will realize how they were used when they are working at 7-11 or McDonald’s.

As far as the protest against Trump, I really have never cared what idiots think so they can kneel all they want without any effect except self-harm.

Trump can begin to carry a sword, and tap them on the shoulder … or in the arse.

What’s next? “Resistance is futile?”

we already had the Borg(ia) queen try to become Prez (how many times?).

notamemberofanyorganizedpolicital in reply to 4th armored div. | September 25, 2017 at 11:02 am

You mean the “Resist Pants” leader? Psst. I hear she got that from Bill.

Perhaps, we ought to re-define their kneeling. For example, “My, my, look at all those grateful athletes kneeling in honor of America for all its bountiful blessings.” Then, when they kneel we also kneel and sing “America the Beautiful”!

Someone with a James Earl Jones voice needs to sound off over the stadium speaker sytem: “Now, let us pray …”

I would like to personally thank the NFL for knocking Hillary’s book tour off the news.

That traitor clinton will come out an say she inspired the protests.

This is even funnier than feminists showing their support by wetting their pants.

So, Lefties’ new act of protest against Trump will be to kneel before him? That should be an interesting sight.

I can’t wait until the Dims in Congress kneel when President Trump enters the House chamber for a joint session.

notamemberofanyorganizedpolicital in reply to rinardman. | September 25, 2017 at 11:04 am

LOL That visual is hilarious!

That along guarantees the Dims will do it on national TV.

Foreigners will think Trump has his adversaries under some kind of mind control, especially when they explain that kneeling in front of your enemy is a form of protest.

The Left is on its way down to “all fours”. It comes natural to them.

Kneeling before a president brings up images of Monica.

Once that image is seen, it cannot be unseen.

thank you Billy Bob – from a grateful nation who dodged a bullet.

EXCLUSIVE: Parties, receptions, radio addresses: How brazen Bill Clinton and Monica Lewinsky were never far apart UNTIL their steamy phone sex was intercepted by Russia and the UK

notamemberofanyorganizedpolicital in reply to Petrushka. | September 25, 2017 at 11:05 am

Where you think Hillary got her “Resist Pants” idea from?

Not just Lewinsky, but the MSM under Obama.

Oh, come on. Somebody has to post the obligatory “Kneel before Zod” meme.

It is ironic that they’ve chosen to kneel, a sign of submissiveness.

Hmm. . . .on your knees in resistance, fist in the air and mumbling “resist we much”! Lord, these folks can’t see the forest thanks to all dem’trees.

What the fuck are they protesting against now [insert rolling eyes]….

Aren’t they afraid this act could be mistaken for …. praying?

Hope you don’t mind if I steal that?

Geeze- I had to scroll 2/3 of the way through this to get to first Zod reference. Probably because Supergirl and DC ruined the franchize by going all SJW in recent years.

apparently some fans have figured out the game

“Pittsburgh Steelers offensive lineman and decorated Army veteran Alejandro Villanueva became an instant hero to many fans around the National Football League when he became the lone player on the Pittsburgh Steelers to stand for the national anthem before Sunday’s game against the Chicago Bears. And those fans are responding to Villanueva’s act with their wallets.

On Fanatics.com, sales of Villanueva’s jersey skyrocketed, launching up to the third highest-seller in Pittsburgh Steelers jersey as of just before 8 PM Eastern time, behind only a custom Steelers jersey and Antonio Brown’s jersey. Villanueva’s jersey also jumped into the top sellers around the league, and as of 7:45 PM EST trailed only Marshawn Lynch, Derek Carr, Carson Wentz, Brown, and Aaron Rodgers in sales.”

Unfortunately, he has apologized for “throwing his teammates under the bus”. Whoops. Wonder how his new jersey owning fans feel about that?

They drop to their knees while screeching “teabagger!”

notamemberofanyorganizedpolicital in reply to Paul. | September 25, 2017 at 11:06 am

Yes. That is always a problem for people who can not “think.”

Just when you think comedy is dead…this.

I especially love Edie Clark’s tweet, that she’ll be on her knees all day. As a guy I heartily approve! Bwahahahaha.

Did she get the idea from Madonna?

The liberals can kneel and bob before Trump in fealty.

When I finished third grade in the mid-1950’s, I figured that was the end of third grade.

Now every time I hear about the Left, it’s like dealing with third grade again.

Their incredible lack of reasoning, commonsense, and maturity will eventually be their demise. Mother Nature does flush her sewer every once in a while.

I’m fed up with the NFL for many reasons, and I don’t sympathize with the players who kneel for the Anthem. That having been said, President Trump is being an irresponsible ass for embroiling himself in his issue when he (and America) have so many other irons in the fire.

The irony is even richer when one thinks of the reaction to Tim Tebow kneeling in prayer.

If any of these child-men had real courage, they would travel to North Korea and take a knee during the playing of the DPRK anthem.

The next pose for NFL players – and their idiot coaches – will one where they stand with their heads up their asses when they find themselves off the gravy train.

This issue has generated more reader comments than I can recall for any previous posts, at least in a long time.

Interesting morning at work today. The office staff consists of 8 women. As I walked in, they were all talking about this; all were disgusted with the NFL & thought the kneeling protests were wrong & disrespectful. No one said anything about Trump’s comments specifically, even though most of them are not Trump fans & I suspect most, if not all, voted for Hillary.

This may well turn out to be another example of the disconnect between the media/elites and us ‘normals’.

Memo for Progs: Since you’re now so into kneeling, we’re sure you’ll look forward to living the rest of your lives on both knees after our side wins the coming civil war.

So now that the Russia lie has fallen apart they retreated back to the hands up don’t shoot lie. These people have no shame no self-awareness. My favorite was the NFL commissioner complaining that Trump was disrespecting the NFL. The same NFL that disrespects the national flag in the national anthem. What the hell is wrong with these people.