Ben Shapiro Speaks at Berkeley Amid Massive Security and Protests

Ben Shapiro Speaks at Berkeley Amid Massive Security and Protests

“Facts don’t care about your feelings.” 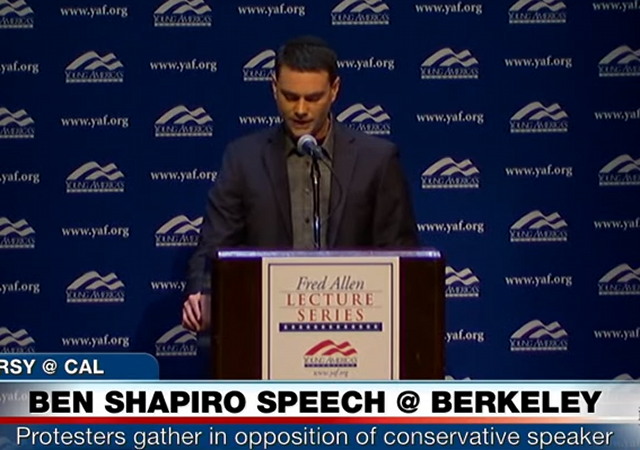 Ben Shapiro spoke at UC Berkeley last night and to look at the campus prior to his arrival, you might have thought President Trump was coming to speak. There was a massive security presence and left wing students came out to protest.

You can see the police presence in the tweets below:

The calm before the expected storm, here on the ground at Berkeley right now before Ben Shapiro’s speech https://t.co/h53BzFy4IQ pic.twitter.com/wziE8Bfp0I

It’s as if Berkeley is bracing for a hurricane right now, stores boarded up, mraps SWAT vehicles patrolling b4 @benshapiro speech pic.twitter.com/ZIP29qEHDf

#DEVELOPING @UCBerkeley has posted “no trespassing” signs ahead of expected 4pm closure of #SproulPlaza for @benshapiro speech. #ABC7now pic.twitter.com/PF4mvGeV1h

Attendees had to pass through a metal detector:

Others displayed their ignorance by equating speech with violence:

“Speech is violent, we will not be silent!” Students protesting #BenAtBerkeley. pic.twitter.com/49V6DD9OI7

There were also a few arrests:

Inside the hall, things went smoothly and Ben was able to speak without interruption. He was introduced by a member of the UC Berkeley Republicans and spoke for approximately 25 minutes, then took questions from the audience. Shapiro touched on all of the topics he normally addresses in such appearances.

The false premise of victimhood in the United States, the flawed argument of intersectionality, and also about the protests at Berkeley which tried to prevent him from speaking. You can watch some highlights below:

Ben Shapiro answers a student on abortion during the Q&A portion and it ends with an epic takedown. ????#BenAtBerkeley pic.twitter.com/J1iFFCp7TV

In this clip, Ben explains what the “Alt-Right” is and reminds people that he is no part of that:

If you want to watch the whole speech, the video below is cued to start at the 14 minute mark:

Don’t really know much about Shapiro, but this is good stuff, based on watching the three short videos. I’ve bookmarked the last video for later. Thanks, Mike.

You’ve been missing out…I disagree with some of his things but they are always well-researched and presented.

The arrested individual shown above in Thom Jensen’s tweet reminds me of Saturday Night Live’s “Pat” played by Julia Sweeney. I… I… I just can’t tell!

a good candidate for straightjacket electroshock/sarc

seriously what are they protesting, words which they cannot defend against ?

I had the exact same reaction. I’ve looked at the picture 3 times and its still 50/50…

Crocodile Dundee could tell ya.

There is now a risk that some students at Berkeley might be tempted to think for themselves thus upending the Leftist party line. What will the faculty slave masters do in response? No slave master can sleep well with the chance of “uppity” slaves on the loose.

notamemberofanyorganizedpolicital in reply to Whitewall. | September 15, 2017 at 2:38 pm

True Diversity of THOUGHT is a very dangerous thing to slave masters.

That Ben Shapiro guy is a conservative. When you wonder what a conservative is, you can look to him as a type. I can recommend many others.

You could benefit greatly from his example…particularly in discourse.

“That Ben Shapiro guy is a conservative. When you wonder what a conservative is, you can look to him as a type. I can recommend many others.”

I’d appreciate your recommendations. I could stand some guidance. Not afraid to say so.

Because of my names curse, those are the ones that come to mind. It’s a start.

Good start especially from memory. But I would add Victor Davis Hansen just because he’s near the top of my list and his writing is always so terse and right on topic. You can tell his academic and think tank background has made him so effective at it. And given his history I think he does more for expanding conservative ideas than most others (not all).

That should be Hanson BTW. Effing Android………

Well, that’s the first and last time I’ll be part of such august list.

No real list is complete without Thomas Sowell. There are a great many interviews of him on YouTube and he is extremely well published.

“…you might have thought Hitler was coming to speak.”

Isn’t it amazing how Ben Shapiro has the courage to speak when threatened, and he’s had many death threats against him and his family, while little lefty thugs are frightened by words.

Ben is one of the good guys and my respect for him knows no bounds. That doesn’t mean I always agree with him but mostly I do. Because he generally knows what he’s talking about.

It is rare when two conservatives agree 100% with one another, but Shapiro is a guy with whom I agree 90% of the time, which is near high as it gets.

that is what it means to able to hear and evaluate.
we all have personal biases but give the other side a chance to convince, not something the left and I-Slam will tolerate.

In the 1960s,I remember seeing a TV debate between Gore Vidal and William F. Buckley, just not polar opposites but polar extremes. It may have been on Johnny Carson. I do recall the repartee between them was both entertaining and informative, which seems to be a lost art form today.

An ‘and’ search of the two names results in numerous results including video clips, which I do not have the time to sort through. However, it may be worth a look to see what political discourse used to be.

His description of the Alt Right was BS. I did enjoy his takedown of the abortion activist.

Oh? Please DO explain how it was “BS”…

Admittedly I only made it a little over 2 minutes into his 5 minute diatribe but it was all BS up until that point. The last straw was the canard equating the Alt Right with white supremacy. The Alt Right does not believe in the general supremacy of any race, end of story. There is a huge difference between believing that white people have a right to exist and saying white people are superior.

p.s. Nazi’s are NOT Alt Right.

Well, references, please. Because the Alt-righters I’ve read certainly are white supremacists. They hove to exactly what Shapiro depicted.

Asserting that white people have a right to exist is a far, far cry from the guys I’ve read.

So, you get to show me wrong now.

Is “alt-right” even a thing? Is it just another media label for “far-right”? The only way to know is to list some authors who call themselves alt-right and then figure out what their unique claims are. I can’t think of any.

Yes, there are supremacists, white, black and others. There will always be supremacists. But conflating them with the “right” is just a way to undermine the entire non-left bloc.

So, Shapiro is not really helping conservatives by separating himself from alt-right, because he’s still on the right, and that’s all that public opinion-makers need.

He’s a good conservative, but a #nevertrumper who won’t recognize that he has more in common with Trump than the alternative. And, when decisions have to be made, you need to be practical, not dogmatically correct.

I wonder why the always charming Yvette Felarca did not make an appearance.

Would it be self defense to punch someone chanting “speech is violence”?

To be legal you can only punch them in the mouth.

If there’s one thing the Left loathes more than conservatives, it’s Jewish conservatives. The archetypal “Jewish Nazi”, George Soros, is a god to the Left.