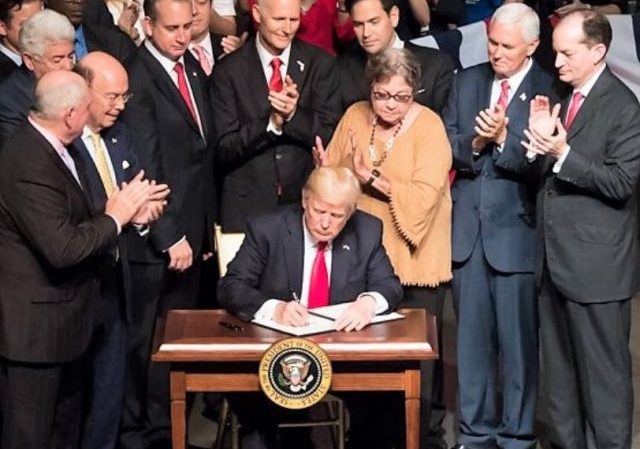 As we approach the 150 day mark for President Donald Trump’s first term, I thought in might be useful to have a retrospective post about how the American press has presented his record, outside of Twitter, Russia and Comey hearings…and highlight some of his underreported victories.

Professor Jacobson so noted, the news cycle is essentially over for the assassination attempt on the Republican congressional baseball team. To be sure, if the Democratic congressional representatives had been targeted (and the assassin found with a list of Democratic targets in his pocket), this would have been “top of the fold” for many more weeks to come.

Furthermore, the press will manipulate the headlines and ledes of stories to make it appear that President Trump is not going to keep his key promises, all in a media effort to peel off supporters. The New York Times reporting on Trumps supposedly retaining Obama Dreamer’s policy is one of the many examples.

In fact, at one point it was reported that Trump was going to keep the Paris Climate accord! That is why I have personally found it useful to wait 3-4 days for the real details of any story to finally make an appearance before swooning.

Today I thought I would highlight the President Trump’s top 16 wins, which may have gone under the radar with the media-generated obstruction and collusion drama.

Yes, the US is officially withdrawn from the Paris Climate Accord. He has also stopped payment to the Green Climate Fund.

President Trump has used the Reid rule and the Republican congress to appoint a slew of conservative judges.

President Trump has hit the reset button on the odious agreement that our former president made with the dictatorship of Cuba. He will retain the embassy for leverage. Additionally, he withdrew from the Trans Pacific Partnership and is looking to get better terms for this country under the North American Free Trade Agreement.

4) The return of our political prisoners.

Aya Hijazi and Otto Warmbier were languishing in foreign prisons during the Obama administration. They are now reunited with their families.

President Trump signed an executive order to expand apprenticeships and vocational training to help all Americans, offering an alternative to the progressive college educational pathway that has undermined the success of an entire generation.

President Trump hasn’t allowed the press-induced political dramas to distract him from engaging with business leaders and implementing policies that actually help the American economy. The stock market’s record highs are a vote of confidence.

The President ordered the end to record-keeping related to the preparedness for a bug that afflicted some computers at the turn of the century.

The key to many wins on this list, and likely all the future lists that I will need to make, is that President Trump and his team are focused on ending regulations, rather than mending them or allowing them to breed unchecked.

The number of attempts to illegally cross the southern border have dropped each month for the past 6 months, and President Trump gives no indication of his changing policies.

President Trump promised that his immigration policy priority would be the deportation of violent gang members, and Immigration and Customs enforcement is working to decapitate the worst of them: MS13.

A new mine has opened up in Pennsylvania, while Obama-backed green energy companies go bankrupt.

Lowering regulatory burdens and fuel prices has meant that manufacturing plants are beginning to come back to both coasts and the Midwest. In fact, the business climate is so improved that some foreign companies are now planning to outsource to the U.S.

President Trump’s mending of fences with allies, damaged by Obama, during his tour of Saudi Arabia, Egypt, Rome, Brussels and Sicily will be the core upon which he will build a successful foreign policy that puts American first. However, the First Lady may have stolen the show and demonstrated what an asset to this country she is.

A reminder of what life could have been like, in this video production in which she compares herself to Wonder Woman.

CONCLUSION: It has been a very busy 150 days for Team Legal Insurrection. I anticipate the sprightly pace of news to continue!

You can scrap #16. It was a crutch, for those of little faith, that’s no longer need. President Trump has a demonstrated record of taking care of the nation’s “business” in a manner like it hasn’t been for quite some time. Moreover, despite the thugs and losers in the streets and the news channels, there’s sense of pride being restored in America.

#16 all the way. Watch the video. I wake up so happy every day that she isn’t president. Having a president who puts our interests first every day is just gravy.

He has established his Presidency in his own right. The defining of him as over against someone else does him an injustice. And, in five months, he has accomplished this. Tremendous!

However, #16 is pretty damn exciting.

Agreed. However, I now view it as a carry over from the campaign when there was quite a bit of doubt about him. Now that this is no longer the case, at least in my view, I think the comparison needs to be put away. In one of the most hostile environments and with a mostly do-nothing Congress, his early months are unparalleled with few exceptions.

That Y2K point is from OMB and is 12 pages long covering more areas than just the Y2K issue. https://www.whitehouse.gov/sites/whitehouse.gov/files/omb/memoranda/2017/M-17-26.pdf

And there were two EOs that could have a huge impact. One is on Election Integrity that establishes a commission headed by the VP to look at registration and voting process across the US. It’s to look at the good and the bad laws, rules, policies, activities, practices that either enhance or undermine confidence in the voting process. AND, it is to look at vulnerabilities in voting systems. Best of all, once it issues it’s report, the commission self-destructs.
https://www.whitehouse.gov/the-press-office/2017/05/11/presidential-executive-order-establishment-presidential-advisory

The second EO covers strengthening the cybersecurity of fed networks and critical infrastructure. It’s a long EO and it does have some deadline dates.
https://www.whitehouse.gov/the-press-office/2017/05/11/presidential-executive-order-strengthening-cybersecurity-federal

A lot of the early EO/EM were instructions for the departments to go look for inefficiencies and rules to be eliminated. The reports should be coming up pretty soon since many had a 90-120-180 day reporting requirement.

Thanks, great list. Although, let’s not get complacent about Y2K. Maybe those deadly computer bugs are just watching and waiting…

I’m generally happy with Trump, but he still has significant unkept campaign promises, including repealing Obamacare, nuking the Iran Deal, building the wall, renegotiating NAFTA, and of course defeating ISIS. I think some progress has been made on all of these things and I understand that the environment is exceptionally difficult, but ultimately he is going to be judged on whether he can get any or all of these things done.

And repealing DACA, under which his administration has granted NEW documents to new applicants.

You need to check with the RINOs in congress about Obamacare. The POTUS does not write laws.

I know for a fact that some data entry software assunes a year over 50 is 20th century. Even though the underlying database stores the full four digit year.

#17 – He fired James Comey as FBI director after nearly every politician in D.C. agreed that he was not doing his job.

#18 – He has exposed the vast numbers of the media who break down into frothing rants whenever anything Trump-related and positive crosses their desks.

#1b – By withdrawing from the Paris accords, he has lifted the veil on the billions of taxpayer dollars that would have otherwise been shuffled off to whatever European boondoggle the Eurocrats had set up, and showed millions of Americans just how many crippling regulations had been set up to be dropped around their respective necks, without any measurable benefit.

“American press?” At this point in history, it’s an oxymoron.

Trump has been stellar in his performance since his inauguration.

I couldn’t be happier. POTUS is doing such a great job it’s MSM unreportable.