“This trip has also been incredible for me as first lady.” 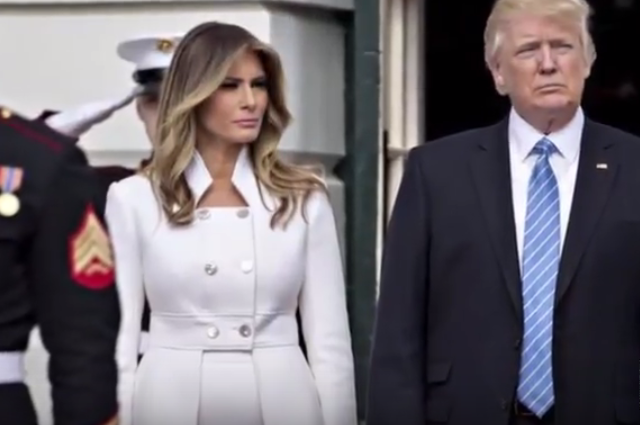 While President Trump was working to have the Muslim nations drive out terrorists and negotiating to have NATO nations pay-up for their defense, First Lady Melania Trump was dazzling the world with grace, class, and dignity.

The First Lady has not yet moved into the White House, so seeing her in formal venues has been rare until now. However, if the past 9 days have been any indication, Americans will soon be under the spell of President Trump’s beautiful wife.

Personally, I sense she has gotten substantially more comfortable with the very public role she now plays during this trip. For example, I was enchanted by her very gracious and heartfelt speech at Naval Air Station Sigonella in Sicily, which she seemed to enjoy giving immensely.

‘It has been a great trip and many strides have been made,’ Mrs Trump said.

‘My husband worked very hard on behalf of our country and I’m very proud of him.

‘This trip has also been incredible for me as first lady.’

The 47-year-old said she was honored and blessed to have been granted an audience with Pope Francis, and she shared stories of her time spent with sick children in various hospitals.

She recalled meeting one specific boy at Vatican’s children’s hospital in Rome on Wednesday.

‘Just hours after leaving, a young boy I spent time with found out he had received a new heart donor. Receiving that news is a moment I will never forget and I wish him a speedy recovery,’ she said.

The first lady also recalled drawing pictures with children in Brussels and one child gave her a picture that said: ‘We are all the same.’

‘This trip for me has been very special and I will never forget the women and children I met,’ she told the crowd.

One of the “tells” showing that Melania was a hit was that the elite media created a #FakeNews scandal, which I will refer to as HandHoldGate.

Did President Donald Trump get friend-zoned by his own wife … again?

Just one day after First Lady Melania Trump made headlines around the world with a video that appeared to show her swatting away her husband’s attempt to hold hands, she seemingly gave an encore performance.

Another sign that Melania has genuine international appeal was the snark with which Newsweek wrote a piece on her time with the G7 spouses: What Will Melania Trump Talk About With The Other NATO Spouses?

As a group, they’re not obvious picks for Melania’s new pals. They include Emine Erdogan, the devoutly Muslim wife of Turkish President Recep Tayyip, and Brigitte Trogneux, who met liberal French President Emmanuel Macron when she taught him in school.

The day has been organized by the Belgian foreign ministry and will include trips to art galleries and a brief meeting with the monarch, Queen Mathilde of Belgium. Trump is expected to attend at least some of it. But what can she and her companions talk about in the downtime that won’t get too awkward?

Gee, Newsweek, I don’t know. Melania speaks six different languages, and as my Twitter feed shows, she seems quite capable of conversing with a wide array of people.

A little boy who I visited today & had been waiting for a heart transplant will be receiving one! #Blessings #Faith pic.twitter.com/DZU3ojxXVC

Today’s visit with His Holiness Pope Francis @Pontifex is one I’ll never forget. I was humbled by the honor. Blessings to all. pic.twitter.com/NiomkFQqJb

Finally, the elite media and the social justice warriors who follow them simply had to complain about the cost of her wardrobe.

Yet, the fashions were carefully selected to respect the culture of the country she was in, honor the event in which she was participating, highlight designers from allied nations, and represent the American people with dignity. Furthermore, I have notice many “Find Melania’s Fashion” advertisements, so those interested in sharing her style can purchase similar items in their price ranges. 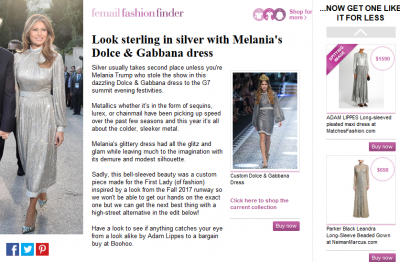 In a nutshell, the Trumps had romantic moment in Italy, Melania has helped make the international trip a huge success, and women everywhere will have access to a little more fashion glamor.

I would like to thank the American media for its 9-day stint of concern trolling.

If President Trump hit a home run, then his wife hit a grand-slam home run with bases loaded.

“What would Melania talk about with the other G7 spouses?”

What the hell would BILL talk about with them?

Bill wouldn’t be talking to the wives, he’s be in another room chasing one of Hilliary’s interns around a desk.

A small desk….Bill’s no spring chicken.

The man who accompanied Melania to Europe and the ME…

Did anyone see the get up Erdogan’s wife was wearing? Looked like she borrowed it from Hillary. And that hat! Looked like a basketball with a hole cut in it!

I like the way they refer to Jocasta Macron as Brigitte Trogneux. Are ANY of the G6 wives comfortable with her? What CAN they talk about? I’m sure they’re biting their tongues while killing time by keeping it general.

Wouldn’t they all be expected seek out Melania for relief from the weirdness? She is the only classy person in the room. Of course, they always come out as frumps in those pictures next to Melania. The paparazzi frenzy over Melania triggers the venomous tongues of the scorned flibbertigibbets, the mean girls who hate the girls who were picked for the cheerleader squad.

It’s lonely at the top.

Not with the likes of us having your back.

That Trump sure is an anti-immigrant bigot.

It hasn’t occurred to those idiots that Mrs Trump has her own personal income buy those clothes. A lot of the carping about her clothes is pure jealousy. She is not like the Mooch, who did in fact have the taxpayers pay for her ugly clothes.

Well, Mme. Macron and Melania could have talked about being married to someone where the age difference is over two decades- Donald Trump is ONLY 23 years older than Melania whereas Brigitte is 25 years OLDER than Macron (her two oldest children are older than her “husband”). Mme. Macron could also have talked to Ivanka about how fun it is to be an heiress.
Since Mrs. Trump is fluent in French, conversation wouldn’t have been a problem.

I thought that Mrs. Trump was elegant and respectful at all of the stops on the trip and beautifully represented the United States. Her gesture of holding hands with Mrs. Rivlin as they walked did not go unnoticed by me (a lovely thing to do with a lady who is so much older, and obviously, somewhat infirm). Mrs. Trump and Mrs. Netanyahu have a real friendship. And the only spouse who came close to Mrs. Trump’s elegant style was Mrs. Abbe- who is gorgeous and dresses so elegantly. Often, Mme. Macron looked like she was going to the shopping mall or to the hairdresser’s. The way she held herself, leaning on the exhibit at some venue, simply showed me that she had no respect for anything she was doing, nor the people with whom she was associating. Obviously, not a Parisian woman.

This is one of the PR wins for having Malenia there was the fact she could speak directly with ALL the people she was visiting.

The trip yo see the kids at the itslusn hospital where she was speaking Italian was just fantastic. Could you imagine how the press would have reacted had it been the last first lady doing that kind of thing? They would have blown their collective loads in their pants!

But as it’s Malenia, they have an image to push of her being dumb and unintelligent to match their image of their husband.

Who cares what these irrelevant, hated asses say?

Funny, they didn’t mention anything when the Bride of Obama was scratching her/his/its crotch on the world stage:

She/he/it does it a lot:
https://www.google.com/search?q=michelle+obama,+scratching+crotch&tbm=isch&tbo=u&source=univ&sa=X&ved=0ahUKEwiZm-7C9pXUAhXM0FQKHSxnBkEQsAQIJQ&biw=1680&bih=928#imgrc=YcZHsBt8oUydRM:

Then there is Melania. As the old saying goes, va-va-voom!

Are those pajamas? OMG. Certainly not from the D&G collection.

Thank you for that picture of Mrs. Trump with Mrs. Rivlin; from other news coverage it appeared that Mrs. Rivlin was totally ignored by FLOTUS and Mrs. Netanyahu. (Most sites didn’t even identify her as the wife of the Israeli president.) Obviously too positive and kind an image for the liberal public.
There must have been so many opportunities for Mrs. Trump to speak with the other leaders/spouses in their native languages, what a shame that there seems to be no public record of it.