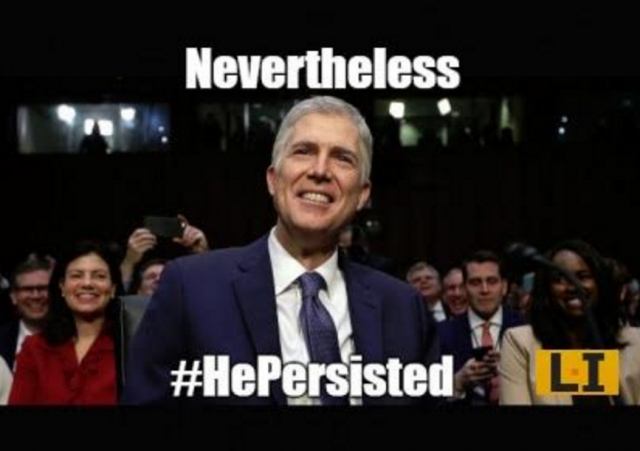 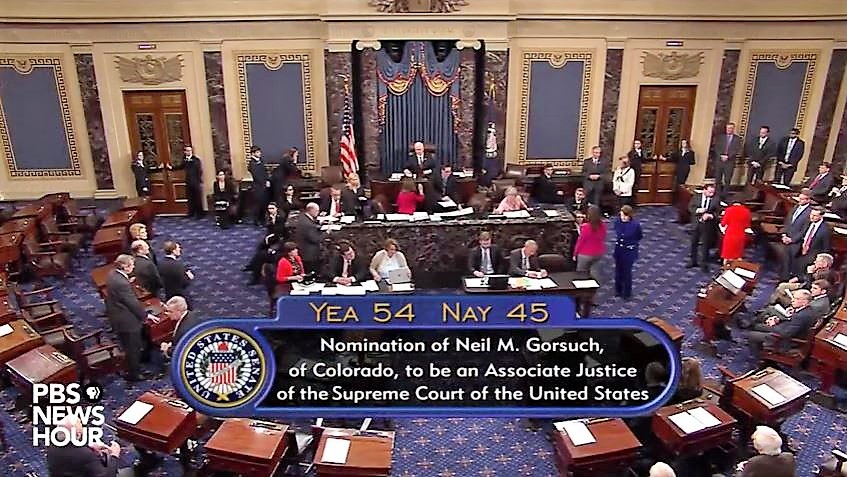 After Democrats forced Republicans to invoke the Harry Reid Rule to close debate on the nomination of Neil Gorsuch to the U.S. Supreme Court, there will be an up or down vote on confirmation with only 51 votes needed to confirm. The vote is expected to start at 11:30 a.m. Eastern.

Considering that 55 Senators voted to close debate, confirmation is all but assured despite a smear campaign by Democrat Senators and activist groups. 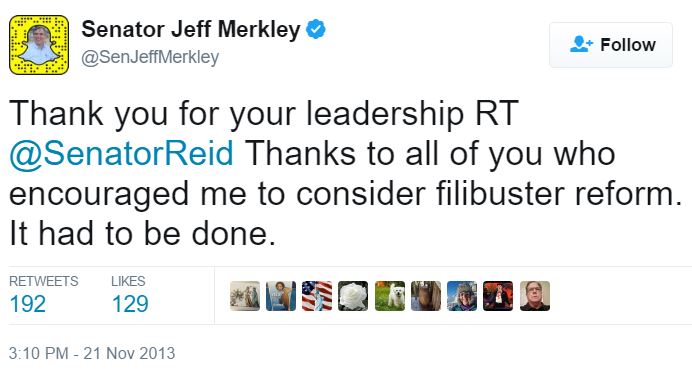 This is a historic moment as it signals a return to the the confirmation process that existed before Democrat Deceit on Judicial Filibusters:

You’re fast, Professor. You beat Drudge and Instapundit with this news! Way to go!

At some point in time, Gorsuch will vote against a conservative topic because the laws will have been badly written. It will be interesting to read the Ds reactions at that point in time.

I hope that the Rs will react quickly to correct the wording of the law or regulations.

Own the Gorsuch Court? Proudly, even arrogantly.

And with more than a modicum of schadenfreude as progressives become the homeless of the Federal Court System.

I will be content if Justice Gorsuch simply keeps his oath.

“I, _________, do solemnly swear (or affirm) that I will administer justice without respect to persons, and do equal right to the poor and to the rich, and that I will faithfully and impartially discharge and perform all the duties incumbent upon me as _________ under the Constitution and laws of the United States.

The mis-information by the left is horrendous! One of the worse results is the tacit approval by the dinosaur media and thereby perpetuating the lies. Too many citizens get information from headlines and can’t/won’t use any critical thinking to get the truth.

notamemberofanyorganizedpolicital in reply to Romey. | April 7, 2017 at 2:17 pm

Maybe we should “play” the Dims and the Dem-owned MSM like they deserve?

Liberals claiming this destroys the legitimacy of the Supreme Court in 3..,2…1…

Just as legitimate as Kagen and Sotomayor.

Next up, appealing the immigration ruling by that liberal Hawaii judge.

notamemberofanyorganizedpolicital in reply to snopercod. | April 7, 2017 at 2:18 pm

Maybe Hawaii should be “chucked” out – given back to the UK…..perhaps…….

The Dem senators nuked themselves for nothing. Now Trump can nominate just about any judge he wants.

Why did Johnny Isakson not vote?

Isn’t it Senator Mullarkey from Oregon?

Isn’t it Senator Mullarkey from Oregon?

I think Hillary Clinton needs to be indicted for the crimes the FBI found and refused to pursue. This may give the Dems something else to think about and shut the Clintons forever.

Got this email from my brother. Probably only be of interest to wonks.

“From a friend who’s connected to GOP insiders:
Mitch McConnell is a frickin’ genius.
Oh, and while I’m at it, not only was McConnell courageous, he was also smart. My buddy Marty Scott explains why (and yes, this is worth noting, because Republicans are rarely smart, particularly in matters of procedure):
“Instead of moving to amend the rules, McConnell made a Point of Order that under the rule change pushed through by the Democrats in 2013, nominations for Supreme Court do not require 60 votes. The Chair ruled that the Point of Order was not sustained. McConnell then appealed the ruling of the chair. Once the vote is taken on whether to sustain the ruling of the chair and the Chair is overruled, Republicans will be able to state factually correctly that they did not change the rules. By the procedure, it will be deemed that the removal of the 60 vote requirement was done by the Democrats’ 2013 rule change.”

I recognize that I have a bias against Yertle, especially as being competent and having a spine. I acknowledge that doing “the nuclear option” was something I never expected him to follow through with. Nevertheless, I doubt very much he is a genius, except in France (Weird Al reference).

This is the Senate Rule: http://www.rules.senate.gov/public/index.cfm?p=RuleXXII

This is what Harry Reid did:

What McConnell did sounds exactly like what Harry Reid did. Senate Congressional Record not up for the day in question as I type this.

If Reid changed the Rule, so did McConnell. If McConnell did not change the Rule, neither did Reid.

The PRESIDING OFFICER. The majority leader.

Mr. MCCONNELL. Madam President, our Democratic colleagues have done something today that is unprecedented in the history of the Senate. Unfortunately, it has brought us to this point. We need to restore the norms and traditions of the Senate and get past this unprecedented partisan filibuster. Therefore, I raise a point of order that the vote on cloture, under the precedent set on November 21, 2013, is a majority vote for all nominations.

The PRESIDING OFFICER. The precedent of November 21, 2013, did not apply to nominations to the Supreme Court. Those nominations are considered under plain language of rule XXII. The point of order is not sustained.

Mr. MCCONNELL. Madam President, I appeal the ruling of the Chair.

That’s baby step away from the twilight fringe (a.k.a. penumbra). One giant leap for humanity.

While this fight was stupid and over-the-top hysteria by the Left (Democrats really do not exist any longer, just Leftists), be prepared for the fireworks should Gunsberg or some other liberal SCOTUS judge be removed from the court. That fight would really be one to alter the status quo. Imagine the fear from the Left having to face 6 conservative judges. That fight will make this one look mild in comparison.

At this point, PDT could nominate someone to the right of James Madison and the D’s would be powerless to stop them.

Four years is a very long time if you happen to be an associate justice in your 80’s.

Look for a 7-2 court by the end of his first term.