Israeli-American Jewish teen arrested for most of the threats. 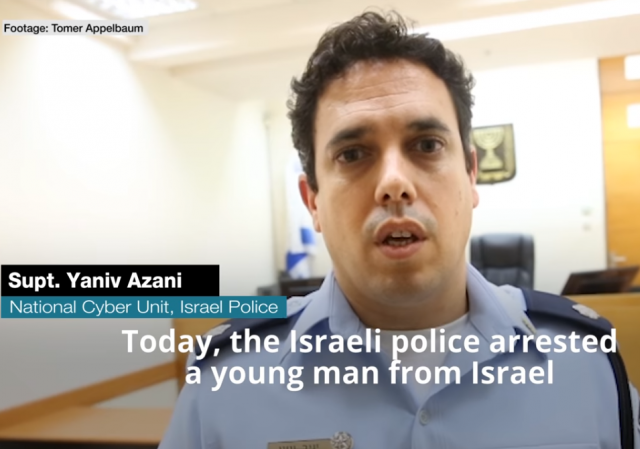 Israeli authorities, cooperating with the FBI, have arrested a Jewish Israeli-American teenager for the majority of bomb threats phoned into Jewish Community Centers in the U.S. and around the world.

Those bomb threats led to widespread condemnation of Donald Trump from liberal groups for allegedly fomenting a wave of anti-Semitism. The JCC threats became a hammer used to beat Trump over the head for political purposes unrelated to fighting real anti-Semitism, which most frequently nowadays comes from the Leftist-Islamist coalition opposed to Israel’s existence.

When Trump allegedly suggested that the threats might come from people trying to make him look bad, he was accused of suggesting the JCC threats were “false flag” operations. While the exact words he allegedly used never have been clear, the suggestion was met with howls of condemnation from liberal Jewish groups.

Trump addressed the wave of JCC threats at the start of his speech to a Joint Session of Congress:

A Jewish Israeli teenager born in the US has been arrested on suspicion of issuing dozens of fake bomb threats against Jewish institutions in North America and elsewhere in recent months, police said on Thursday.

Police said the resident of the southern city of Ashkelon was the subject of a months-long undercover investigation by police’s Lahav 433 cyber unit and the FBI. It said in a statement that the motive behind the bomb threats was unclear. Police said he is 19 years old, but several Israeli media outlets reported him as 18.

Police spokesman Micky Rosenfeld said the suspect allegedly placed dozens of threatening phone calls to public venues, synagogues and community buildings in the US, New Zealand and Australia. He also placed a threat to Delta Airlines, causing a flight in February 2015 to make an emergency landing.

“He’s the guy who was behind the JCC threats,” Rosenfeld said, referring to the dozens of anonymous threats phoned in to Jewish community centers in the US over the past two months.

Here is what one of the voice-altered bomb threats sounded like:

The suspect has lived in Israel many years. The army refused to draft him after finding him unfit for service. The suspect’s motive is unknown, but police accuse him of hundreds of incidents involving threats to institutions around the world, including Israel, over a period of two or three years.

Some five computers were confiscated as well as other equipment, including antennas he used to access other people’s networks and to commit the alleged crimes undetected. This initially threw off the police and it led them to question others whose network were used. Eventually, the police created a profile of the suspect and the technology to find him. Police say that he attempted to grab the gun of an officer who came to his home to arrest him.

This arrest is consistent with earlier reports, NYPD: Single Caller May Be Behind Most Jewish Community Bomb Threats.

The other arrest in JCC threats was made in early March of disgraced liberal journalist Juan Thompson. Thompson allegedly made threats to JCCs and the ADL in a manner trying to frame his former girlfriend, What We Know About Juan Thompson, Arrested for Threats Against Jews.

So what we have is a Jewish Israeli-American teenager and a liberal journalist responsible for all or most of the bomb threats.

Yet Donald Trump was raked over the coals by liberals, particularly liberal Jewish organizations and activists, for allegedly fomenting a culture of anti-Semitism that led to the bomb threats. Yet it was a false narrative.

I don’t have time today to name names, but that’s going to happen. It needs to happen. Groups like the Anne Frank Center (US), which last year reconfigured itself focus its efforts on social justice activism, have done great damage to the fight against real anti-Semitism by trying to use the JCC threats as a political hammer against Trump.

There need to be apologies. The line forms on the Left.

There need to be apologies. The line forms on the Left.

I’m sure that line will be just as long as a line of flying pigs.

Flying pigs actually show at at lines to help alleviate the boredom of those in line:
https://www.youtube.com/watch?v=Y8b9EckGPx0

Trumps very existence is enough to trigger the left!

There will be no apologies and I wouldn’t hold your breath waiting for one either.

This actually is exactly who I expected to be caught; if they authorities can catch them, it’s going to be members of left-wing jewish groups who went out turning over jewish gravestones, too. (who else even knows where to find them?)

But given that this is all blowing up in their faces, the self-hating jews are probably going to stop vandalizing their own families graves and try to find some other way to bring about the destruction of Israel.

I was reasonably sure it wasn’t going to turn out to be a Trump supporter. That just didn’t make sense except to the left-wing crazies. I am sorry, though, to hear it’s a young Jewish man. His lawyer says he’s mentally disturbed; there may be something to that, since the IDF found him unfit to serve.

Separation of Pro-Choice and State. Reclaim the integrity of law and morality.

Retractions and apologies will be issued on the 32nd of Neveruary.

Those ideologues won’t acknowledge being wrong, let alone admit it to others. And their ideological co-travellers won’t hold them accountable either.