Arrest Made in Some Bomb Threats Against Jewish Targets

Arrest Made in Some Bomb Threats Against Jewish Targets 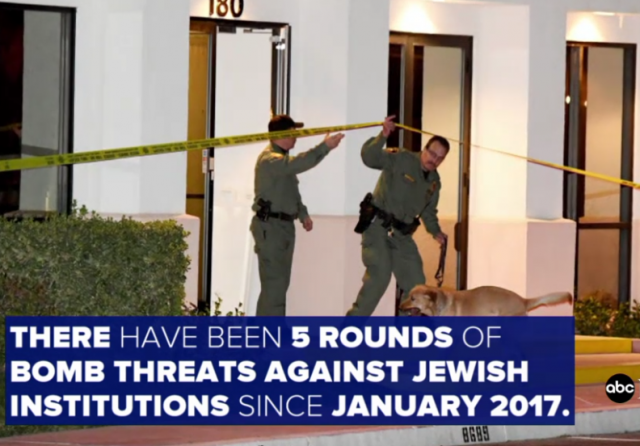 Authorities have arrested Juan Thompson, 31, in St. Louis, MO, for threatening Jewish community centers as revenge against a former lover. From ABC:

The suspect, 31-year-old Juan Thompson, is accused of what federal prosecutors called a “campaign to harass and intimidate.” He’s charged in New York with cyberstalking a woman by communicating threats to JCCs in the woman’s name. Prosecutors said Thompson “appears to have made at least eight of the JCC threats as part of a sustained campaign to harass and intimidate” the woman after their romantic relationship ended.

Thompson faces charges of cyberstalking and other crimes in connection with the threats. He is expected to be arraigned in federal court in Missouri later Friday. Information on an attorney for him wasn’t immediately available.

“Today, we have charged Juan Thompson with allegedly stalking a former romantic interest by, among other things, making bomb threats in her name to Jewish Community Centers and to the Anti-Defamation League,” U.S. Attorney for the Southern District of New York Preet Bharara said. “Threats of violence targeting people and places based on religion or race – whatever the motivation – are unacceptable, un-American, and criminal.”

Here is a copy of the complaint. A full copy is embedded below. Here is the “Overview”:

The man, Juan Thompson, made some of the threats in his own name and others in the name of a former girlfriend, apparently in an attempt to intimidate her, according to a federal complaint filed by the United States attorney’s office in Manhattan and unsealed on Friday.

In one threat, made on Feb. 1 against a Jewish school in Farmington Hills, Mich., the complaint said, Mr. Thompson claimed that he had placed two bombs in the school and was “eager for Jewish newton,” an apparent reference to the December 2012 school massacre in Newtown, Conn., in which a gunman killed 20 students and six school employees.

Allegedly, this is the same Juan Thompson who fabricated sources at The Intercept. The complaint cites his Twitter account:

Know any good lawyers? Need to stop this nasty/racist #whitegirl I dated who sent a bomb threat in my name & wants me to be raped in jail. pic.twitter.com/B1IU0RkNCZ

My Feb 2016 piece on Juan Thompson, who "invented quotes, storylines and even sources” while at the Intercept https://t.co/bZzrlrX0W0

Nothing to see here. Move along.

Yep – watch for this story to ABSOLUTELY DISAPPEAR from the left-wing media narrative, starting today.

They were pushing it because they were ABSOLUTELY CERTAIN that it would turn out to be some right wing, knuckle dragging Trump supporter, and now look who it was – a black, left wing, Obama supporting journalist.

And wasn’t it just yesterday they were bitterly ridiculing Trump for suggesting this whole thing was a “false flag” operation – which is exactly what it has turned out to be?

Just like the NYT and the Clair McKaskell story, bet that they won’t even acknowledge this, they’ll just embargo any future mentions of the entire issue, and erase all of their existing ones.

Well, no. It hasn’t turned out to be anything yet, because the perpetrator of all those crimes is still at large. This guy is not the hoax caller, let alone one of the cemetery vandals, he’s just a copycat who made eight calls. Let’s wait till they catch the guy he was copying before reaching any conclusions.

Sounds like a resume for Hillary’s NYC Mayor campaign. That “Juan” part opens doors like WD40 in a sweaty climate.

Interesting how the vote recounts aimed at Trump only succeeded in demonstrating fraud in favor of the Democrats. And now the calls for cracking down on anti-Semitism from the ADL and Anne Frank Center, also directed against Trump, dredge up this specimen.

Behold, people! When G-d favors someone, his enemies not only fall at his feet, they end up empowering him. Bigly.

But he still needs to be behind bars for the threats.

Just do the same thing to him that the left would have demanded if he had been a white Trump supporter.

okay, I guess hung, drawn, and quartered is considered a little bit harsh these days.

What’s really strange is that one of the articles he fabricated for the Intercept was about Dylan Roof and how the reason he became a killer was that he had lost his long-time girlfriend to a black man. But if Thompson had actually set off a bomb then he would have become a real life version of that fake Dylan Roof, just with the races and religions changed.

Since this creep lives in the St. Louis area, presumably authorities will look to see if he might have vandalized the cemetery there. This doesn’t explain the other two cemeteries, though, nor all of the calls. Copycats may have been busy.

I am glad to see this explanation for at least some of the ugliness. The legacy media attempts to pin this on Trump supporters, with no evidence and no reason, have blown back in their faces.

He’s the copycat. The original is still at large.

Is wapo offering him a job? He’d fit right in at their place.