What We Know About Juan Thompson, Arrested for Threats Against Jews

What We Know About Juan Thompson, Arrested for Threats Against Jews 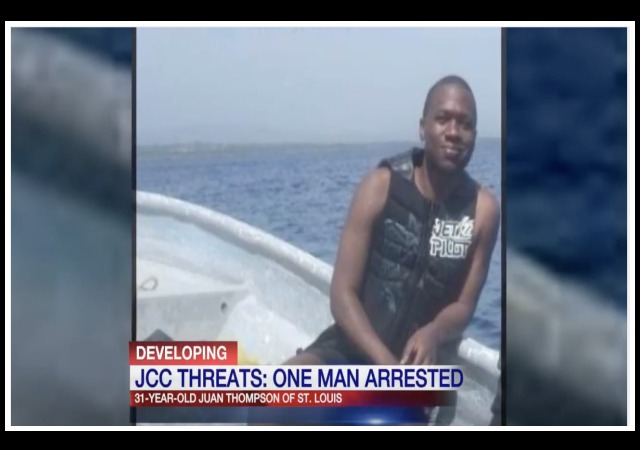 Thompson made these threats in his ex-girlfriend’s name as an act of revenge, to frame her for the crimes. But this isn’t the first time Thompson has made headlines.

In fact, Thompson flew into the spotlight for fabricating references when he worked at The Intercept.

Yes, Thompson has a history of lying and drawing attention to himself.

In January, The Intercept fired Thompson after three years because he “fabricated several quotes in his stories.” He “created fake email accounts that he used to impersonate people.”

Thompson even created a Gmail account under the name of Betsy Reed, the editor-in-chief of The Intercept.

One story included quotes from a supposed cousin of Dylann Roof, who murdered nine black people at a historic black church in Charleston, SC:

“After speaking with two members of Dylann Roof’s family, The Intercept can no longer stand by the premise of this story. Both individuals said that they do not know of a cousin named Scott Roof.”

In the now-retracted article, Thompson had claimed that “Scott Roof” had speculated during a phone conversation that Dylann Roof may been driven to murder nine black churchgoers at a Charleston, South Carolina church because “he kind of went over the edge when a girl he liked starting dating a black guy two years back.” Thompson’s report was picked up by dozens of other news outlets.

He made eight threats

The authorities claim that Thompson “made at least eight threats against Jewish organizations.” In a few he used his ex-girlfriend’s name, but also made a few in his name. He even ranted against his ex on Twitter:

Thompson tweeted to the Secret Service about her, too:

Tweeted about the bombing threats

Yes, Thompson showed outrage against the bomb threats and vandalism on Twitter:

After his firing, Thompson became more enraged against whites, expressing his hatred on Twitter. He aimed this hatred at Trump as well.

Sent nude photos of his ex-girlfriend to her boss

Thompson went off the deep end after his girlfriend broke up with him that he ended up stalking her. He sent nude photographs of her to her boss:

He also made up texts and emails to her supposedly from a friend that showed Thompson in trouble: 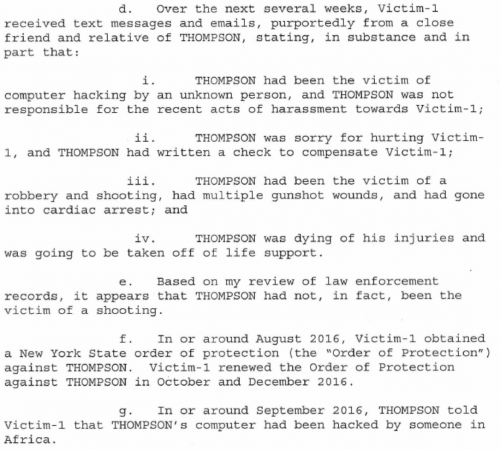 I coulda been an editor.

In January, some idiot called dropped off a suspicious package at one of Breitbart’s offices and then called in a threat. The city evacuated the building, all of the buildings next to it, and then shut down the roads for dozen city blocks, maybe more, right in the middle of morning rush hour traffic.

Since I live a couple of blocks away, taking my daughter to school took five minutes but then getting home took an hour and a half. The police only let me return home because my mother was still there, and only on the condition that we stay inside and keep alert for further instructions.

So yeah, I’m glad that in this case they were just threats and not actual bombs, but have no doubt that EIGHT bomb threats in crowded city centers is going to have a significant impact on hundreds of people’s ability to work, go to school, travel, etc.

And he went to Vassar, which as we know has been in the news for anti-Israel and anti-Semitism among some of its students.

This guy is one of the results of the leftist idea that racism is only racist if coming from white people.

It’s going to get worse.

the most important point is that you will never read a story about the Bomb threats to jewish centers in the mainstream media again.

Ooops! This no longer supports the narrative! I wouldn’t be surprised if the NYT goes back and cyber-deletes every story they ever printed about it.

Of course, this doesn’t account for all the other JCC threats and the cemetery vandalism in the recent wave of anti semitism.