NYPD: Single Caller May Be Behind Most Jewish Community Bomb Threats

NYPD: Single Caller May Be Behind Most Jewish Community Bomb Threats

148 threats have been made since January 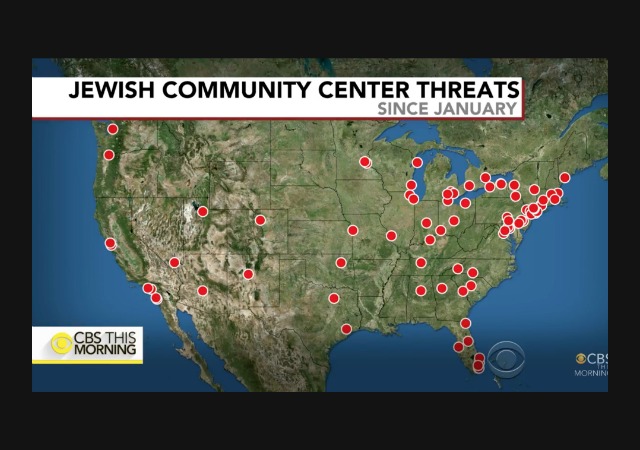 Over the past few months, Jewish Community Centers across the country have received bomb threats that, thankfully, have turned out to be nothing more than threats.

Just yesterday the Jewish Children’s Museum in Brooklyn was evacuated after a bomb threat was received via email.

The New York Police now believe the calls are all coming from the same individual who’s using a voice changer and number spoofer.

From the Times of Israel:

New York City’s head of police intelligence said Thursday that investigators believe one man using a voice changer and phone spoofing device is behind a large number of the scores of threats made against US Jewish institutions this year.

John Miller appeared on the show “CBS This Morning,” describing the attacks as coordinated. The spoofing device makes it appear the call is not coming from the number the man is using, and makes it appear it’s coming from within the institution, he said.

“We have an offender with some technical prowess here,” Miller said.

The Anti-Defamation League says 148 threats targeting Jewish institutions have been received across the country since January.

Miller said the New York Police Department is working with federal officials who are the lead investigators on the case. He said he’s working with institutions in New York to help them manage responses to the threats.

“Most of the time, the person who’s legitimately trying to do harm doesn’t call ahead to diminish the amount of harm he or she is doing,” he said.

This would be easy to don not to mention easy to trace. The next step would be to determine whether these are genuine threats, or hoaxes. The age of the perp is going to be relevant.

I suppose this also points out why we want law enforcement (including the CIA) to have the tools to trace this nonsense. That consideration leads to a whole, different area of speculation.

They are all hoaxes. There is very unlikely even to be an occasional real bomb, because that requires special skills, more money and special materials, and leaves clues (the Chelsea bomber was traced pretty fast from fingerprints and pictures) the numbere of investigators multiplies greatly, and the punishment is far more severe.

It’s gettiong to the point where they are saying that places taht get tehs ebomb threats should not be evacuated, although they should still search for a bomb.

The hoaxer has an insurmountable problem: It is imposisble for him to make a credible claim . Acredible claim would name persons, places and groups involved, and the call would be made to the police, instead of or in addition to the target.

In the latest threat, sent by e-mail to the Jewish Children’s Museum, the hoaxer tried to get a mole hunt going – claiming that it was an inside job. He said he regretted his part but said he would not even say who else was involved or what their cause was. It’s not credible

Annnd…. MSNBC will report that the “NYPD suspects a single caller – possibly Steve Bannon – is behind Jewish Community Bomb Threats” in 4, 3, 2, ….

“Must be another leftist Trump-hater.”

JOHN KERRY YOU CUT THAT OUT!!!

(but notice how as soon as they got burned by having one of the perps turn out to be a black leftist journalist, the MSM will have nothing at all to do with this story any more, which is why we only saw this in an Israeli outlet)

Tom, you didn’t use your Obama voice.

No, of course it wasn’t him, they said as soon as they arrested him that he was a copycat and not the main culprit.

They say Juan Thompson is a copycat. I think it is also posisble that one person recruited a number of different people to do this, and the claim his ex-girlfriend did this was not his motive but an attept at a cover-up. But juan Thompson is pathological liar.

Even if Juan Thompson is indeed linked to the rest of the bomb hoaxes, there could still be copycats.

How many “bomb threats” turn out to have anything to do with a real bomb?

I can only think of one (at least, only one which was famous enough for anyone to hear about … and that one was arguably an act of war, not conventional terrorism).

Of course it’s a single culprit doing the bulk of these, plus one or more copycats doing one or a few each. That’s been obvious from the start.
Those who have access to the evidence can easily the copycats’ MOs from the original villain’s, which is why they could be so sure that Thompson was a copycat and not the original.

It’s also why I doubt the JCM call was made by the original villain. He seems to be targeting JCCs almost exclusively, which makes me think that his motive may not be antisemitic at all; I suspect he has a beef with the JCC network specifically, or with one JCC and is taking it out on all of them.

Oh, plus the fact that the JCM did not get a call, they got an email, claiming to be from a defector from the terror cell who planted the bombs. a different MO probably means a different perp.

Just speculation, but I will hazard a guess that the perp has two attributes: One is a hatred of Israel (possibly, but not necessarily Jews) and a hatred of Trump.

For some reason, the democrats can’t get away from the thought that Trump and Republicans are anti-semitic.

I have some dark thoughts about who might be funding these operations, but I doubt the funds can be traced.

One of these centers is a few blocks from my house. Practically across the street from my high school.

So, NSA which monitors all digital communication in the US can’t help to find this guy? What’s the real story here?

The NSa doesn’t really do the things it is accused of. they were at one point, saving all e-mails I think. None of it was in real time nor could be. E-mails are still saved by the system. And of course, they have the e-mail message anyway.

I think it is likely that the phone systems save enough information to trace these calls. It could well be that they are made from throwaway phones or from public computers using VOIP.

Well the NSA is on the lookout and tracing the suspect, the profile is a single white 70 year businessman , probably in the hospitality field , wealthy , that likes taco’s and sometimes wears a red baseball hat .

Where is Keith Ellison