Haley blasted the blatant anti-Israel bias at the UN. 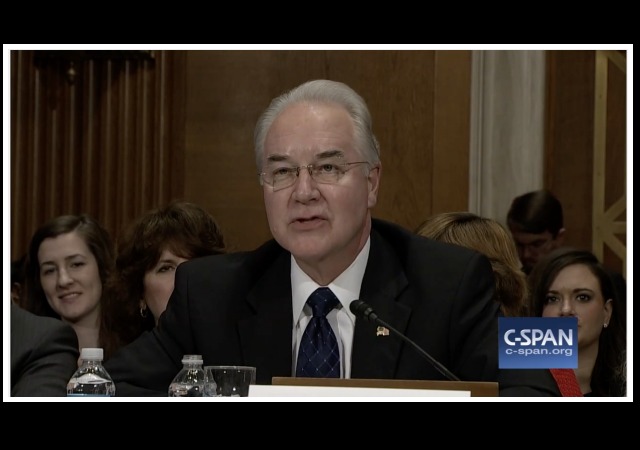 I live blogged Oklahoma Attorney General Scott Pruitt’s senate hearing for the EPA, but three other cabinet choices had their own senate hearings today. That included Rep. Tom Price for Health and Human Services, Wilbur Ross for Commerce, and Nikki Haley for UN.

Obamacare took control of Price’s hearing, since the Republicans in D.C. want to repeal and replace it. Price told the committee that states should lead on a replacement.

Price reiterated the GOP’s goal to “insure everybody” while the new plan “will largely give states the responsibility of covering Americans.” However, Price made sure not to put words into President-elect Donald Trump’s mouth or assume what the GOP will actually put through Congress.

“Insurance for everybody has always been my stated goal,” Price said during the start of his Senate confirmation hearings.

He also argued that more insurance accessibility along with financial help for consumers are the keys to a better plan.

“I think it’s fair to say they don’t want to replace a Democratic health care plan with a Republican health care plan,” Price said before the Senate Committee on Health, Education, Labor, and Pensions. “Folks at the state level know their populations better.”

The Democrats also questioned his ethics due to Price’s past “investments in health care companies.” He signed a pledge to sell his stocks, but Democrats kept asking questions. He told the committee members that all the purchases “have been above board, transparent and legal.”

Billionaire investor Wilbur Ross talked about changes to the North American Free Trade Agreement (NAFTA) and remain tough on China. Ross did not say that he would scrap NAFTA, but wants Canada and Mexico to know that everything in the agreement remains on the table:

“As to Canada and Mexico, the president-elect has made no secret in his public remarks, nor have I, that Nafta is logically the first thing for us to deal with,” said Mr. Ross, who will take a leading role in executing Mr. Trump’s trade agenda. “We ought to solidify relationships the best way we can in our own territory before we go off into other jurisdictions.”

On trade and China, Ross said that America “cannot afford trade that is inherently bad for American workers and for American businesses.” He would also like to expand on American exports, which brought up China:

He took particular aim at China, calling it “the most protectionist country” among very large nations.

“They talk much more about free trade than they actually practice,” Mr. Ross told lawmakers. “We would like to levelize that playing field and bring the realities a bit closer to the rhetoric.”

Trump has an “American First” policy, but Ross assured the committee that he remains “pro-sensible trade.”

Asked about the tariffs Trump has spoken about, Ross mentioned the Smoot-Hawley Tariff Act in the 1930s, which some believe “extended the Great Depression.” That taught Ross the tariffs “didn’t work very well then, and it very likely wouldn’t work now.”

South Carolina Governor Nikki Haley took aim at the UN’s anti-Israel bias and Russia during her hearing with the Senate Foreign Relations Committee:

“Nowhere has the U.N.’s failure been more consistent and more outrageous than in its bias against our close ally Israel,” Haley said.

She added: “I will not go to New York and abstain when the U.N. seeks to create an international environment that encourages boycotts of Israel. I will never abstain when the United Nations takes any action that comes in direct conflict with the interests and values of the United States.”

On December 23, the UN Security Council passed an anti-Israel resolution with the U.S. abstaining from voting instead of wielding its veto power. The vote was the first time in 36 years the UN condemned settlements:

The Resolution in question is pernicious. It declares any Israeli presence beyond the 1949 armistice line (the so-called pre-1967 line) illegal. That means Israeli control of the Jewish Quarter of the Old City would be illegal, as would the presence of Jews in the Jewish Quarter, which Jordan had ethnically cleansed of Jews and ransacked. It also would mean Israeli control of the Western Wall would be illegal.

If Obama abstains, he will have allowed the UN to strip Jews of their history.

Haley continued with criticism towards Russia:

While Trump — and to some extent Secretary of State nominee Rex Tillerson — has been relatively loathe to criticize Russia and President Vladimir Putin, Haley did not shy away from calling the Kremlin’s actions in Syria “atrocities” and agreed with Sen. Bob Menendez, D-N.J., that some bombings in Aleppo constituted “war crimes.” She also said Russia’s incursion into Crimea was “a big concern.”

“I think Russia is going to continue to be at the forefront of a lot of issues that we have to deal with,” Haley said.

Shrieking Crow aka Tomahawk Warren was a disgrace.
Remember. She was the one who gave Hilary a pass on Wall Street money, Pay for Play, the illegal use of a server and storage of emails outside the government, and the destruction of 33K emails after subpoena. Shrieking Crow is a fraud.

Every time I see her, I wish someone could start playing the Florida State War Chant. And if they could add the Tomahawk Chop, that would be even better!

Obviously recess is over and adult supervision of the country is now at hand.

Dog and pony show for the mentally deranged.

Price has a “C” CR rating, and was a BIG Boehner flack.

Now, this from today…

Perry also intends to walk back from his many previous comments criticizing the validity of climate change science. But he leaves open the question of what to do about it and the degree to which humans are fueling global warming, echoing recent statements from Trump’s selections to run the Interior Department and Environmental Protection Agency.

“I believe the climate is changing. I believe some of it is naturally occurring, but some of it is also caused by manmade activity,” his remarks say. “The question is how do we address it in a thoughtful way that doesn’t compromise economic growth, the affordability of energy, or American jobs.”

Everything we know about organizational behavior tells us that putting a “change agent” in charge of an organization TENDS to make them defenders of the status quo.