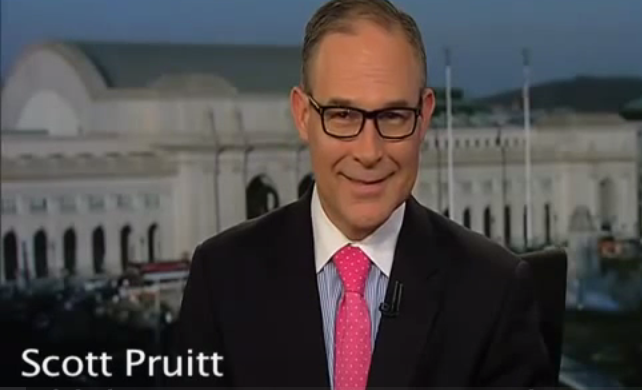 When Donald Trump makes his final cabinet nomination, it will be hard to pick out which of the bold selections is most golden.

Retired Marine General James Mattis as Secretary of Defense was in the running for my top choice. However, it appears that Myron Ebell, the climate change “criminal” who is spear-heading Trump’s EPA transition team, was busy identifying a nominee for EPA Chief who just bumped “Mad Dog” Mattis down a notch on my list.

Mr. Pruitt, a Republican, has been a key architect of the legal battle against Mr. Obama’s climate change policies, actions that fit with the president-elect’s comments during the campaign. Mr. Trump has criticized the established science of human-caused global warming as a hoax, vowed to “cancel” the Paris accord committing nearly every nation to taking action to fight climate change, and attacked Mr. Obama’s signature global warming policy, the Clean Power Plan, as a “war on coal.”

The VOX headline sums up the progressive view of this appointment nicely: Trump’s EPA pick is an ardent foe of virtually everything Obama’s EPA has done

…Under President Barack Obama, the EPA has been particularly proactive in formulating new rules on coal-fired power plants, cars, trucks, and oil and gas operations — all with an eye toward reducing both conventional air pollutants and curbing the greenhouse gases that cause climate change.

Pruitt has been an ardent foe of these efforts for years.

Pruitt has not confined his legal battles to the EPA, either.

…After he was elected attorney general in 2010, Pruitt established a “Federalism Unit” to “more effectively combat unwarranted regulation and systematic overreach by federal agencies, boards and offices,” according to his online bio.

And he has gone on to challenge the administration not just over climate but over a host of other areas. He joined other Republican attorneys general in a lawsuit over Obama’s immigration policies. He has also sued the administration over the Affordable Care Act, saying the healthcare mandate on religious employers to provide coverage including contraception was unconstitutional.

I suspect that the EPA under Pruitt’s direction will be more focused on real environmental protection, so that disasters such as the Flint Water Crisis and the Animas River Spill, won’t be repeated.

During an interview shortly before the election, the current EPA Chief Gina McCarthy implied Americans were going to have to learn to live with less fuel. I imagine her reaction to the news went something like this:

I suspect she may speed up her regulatory creation process a bit once she recovers. McCarthy recently quipped that the, “Train to a global clean energy future has already left the station.”

As I noted, that train was going to hit a hit a yuge, T-shapped wall. And so it has.

Pruitt may not be a former Marine General, but he is a proven warrior against the regulatory over-reaching and power-grabbing EPA.

I would have liked to have seen her face when she got the news.

I can’t wait to hear Nancy Pelosi say she is “concerned”.

The media are going to give Pruitt the James Watt treatment.

Really need to think up some more alternate lyrics to that Mary Poppins song but that’s something that popped into my head about Trumps picks thus far. It also is kinda a pro wrestling nod. Bad guys in wrestling would often use the move when the ref wasn’t looking to gain a temporary advantage on their opponent and set them up for a big move. Nominating Scott Pruitt is definitely a big ol’ thumb to the eye of the left!

There, now can the conspiracy theories about meeting with Al Gore end?

As a dedicated, no apologies #NeverTrump guy, I applaud this nomination. Well played, Sir.

Isn’t it about time all the #NeverTrumpers got together and committed mass suicide?

I think Pruitt is now my favorite too, but I probably put Jeff Sessions above Mattis for #2. These picks are making the left howl and frankly I couldn’t be happier.

Gosh…
What a lineup so far.
As promised.

This is awesome. Ranks right up there with the Defense Secretary pick.

My son posted a Robert Reich piece listing the horrible things that Pruitt and Trump were going to do. I want it all.

Where does Pruitt stand on nuclear energy?