EPA Chief: Americans must learn to live with less fuel

EPA Chief: Americans must learn to live with less fuel 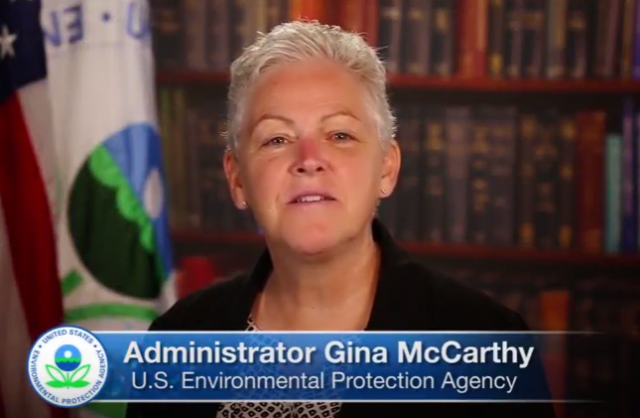 A few weeks ago, the Environmental Protection Agency rolled out a brand new “Climate Justice” program.

This initiative would be incomplete, however, if it did not target those most disproportionately impacted by climate change. It has been well documented that the impacts of a warming and increasingly unstable climate are already weighing more heavily on underserved, low-income, minority, and tribal communities.

As with Obamacare, Americans who believe that this new program is actually going to improve their lives will be…deeply disappointed.

Despite the wildly successful fracking industry, which now accounts for half of all U.S. output, the head of the EPA says Americans are going to have to learn to live with less fossil fuels.

People have to start living a life that’s commensurate with reductions in greenhouse gases,” EPA Administrator Gina McCarthy said while discussing the recent global deal to limit the use of hydrofluorocarbons (HFCs) used in air-conditioning and refrigeration.

During a social media discussion with Mashable last week, McCarthy said that fighting climate change will “not have to be just what government does, but it has to be what people do.”

“People have to start living a life that’s commensurate with reductions in greenhouse gases to the extent they can,” McCarthy said. “But also, as you said- demand government to be responsive to this.”

I do not think that the minority communities targeted in the “Climate Justice” program will appreciate this approach when they do not have enough gas to head to work, or they have to decide between heating their home in the winter or buying locally grown food at the store they are forced to walk to.

But perhaps minorities will be consoled that the EPA is hiring a new “diversity” bureaucrat at a six-figure salary?

The Environmental Protection Agency is looking to hire a “Diversity and Inclusion Specialists,” who will make $100,000 or more per year.

The agency will hire the employee to set up a diversity and inclusion “advisory body,” according to a government job posting.

I might consider applying for the job, but apparently McCarthy doesn’t want to talk to “climate deniers”.

“If they haven’t figured out by now, what in God’s name could anyone say to them?” McCarthy said in a Facebook Live interview with Mashable Tuesday.

“I don’t check out flat Earth society and I’m not talking to climate deniers,” she said. “That’s it. Sorry, I know I’m supposed to be for everybody, but my patience has worn thin over eight years.”

Between the Animas River spill, the Flint Water Crisis, East Chicago’s lead and arsenic contamination problem, the misuse of the rules pertaining to “Waters of the United States” regulations, and the court cases involving the EPA-created law under “Clean Power Plan“, Americans have lost patience with the EPA.

Should Donald Trump be elected, I would give anything to see him go into McCarthy’s office and shout “You’re fired.” Now, that would be real climate justice!

God help us if we have to endure more of this insanity.

One way or the other, let’s not endure it.

North America is functionally energy independent. So, why do you get to tell us how to live?

Who ELECTED you to your office?

Matt…. even if she was elected she does not have the right to tell the rest of us how to live.

That is one of the major issues going on throughout our country right now. Those who want the government to tell people (usually other people) how to live and those who think the proper role is for the people to tell the government how to govern.

The ‘insanity’ is our enduring the rino rats who enable the likes of this freak, and the freaks who are running the executive part of our government.

This bad enough to turn Minnesota into either a red state or an empty state.

Stinking little petty tyrants! WHAT in the world does this mean: “Gina McCarthy also plans to give “climate deniers” a cold shoulder!” What’s a ‘climate denier’ – another made-up phrase by a wing-nut libtard? If Trump is elected I would love to see him relieve her and not give a replacement, and make sure to underfund that department. This would work for much of the bloated federal govt, in my opinion. It’s hard to do anything without any operating monies. Just let those sick dogs over at the EPA die a peaceful death, howling at the moon. There are a lot of things that could wither up and die from my perspective.

THEN sweet Gina spews forth this gem: “Americans must learn to live with less fuel”. I live on the northern plains, where we can get a windchill down to -70F degrees – and she wants to lower the thermostat? There’s ice on the inside of the windows during the winter as it is, and she’s worried about fuel use? Sound to me like it’s time to medicate some of these insane environmentalists, calm them down a little.

The fact that the GOPe controlled House of Representatives has been unable to summon enough courage to present a budget has plenty to do with the power these people wield.

Getting all of us folks to move out of flyover country and into the urban centers has always been part of the big picture! 😉

She is also “out of patience”!
Guess what, Gina, I am fed up with progressive hacks like yourself who would not understand how a republic functions or how science is done if it bit you.
With a bit of luck you will get your walking papers in a few weeks and then you will have to learn how to do with less slopping at the public trough…unless you get set up with a cushy position in liberal academia or the Clinton Foundation and its like.

If Hillary is elected she will double down on this crap. A friend of mine works in a technical position at NASA, they had diversity training and played the Step forward, step back game last week.

They are trying to divide us.

how bout we learn to live with fewer Democraps
and fewer regulations … THAT is something I can
live with ….

Regression to “alternate” green forms of energy raises the final question…. the population that can be sustained on these types of energy is markedly smaller than present… so… how do they plan to decrease the population to match their plans????

Note: The fifteen GS-14 “Diversity and Inclusion Specialists” are Federal Civil service positions (not appointees), and if they can get hired and a start date before the next president is sworn in (whoever it is), they’re in forever.

‘Normally’ these positions would only be open to GS-13 career employees, but with ‘experience’ in other fields… (from USAjobs)

Correction: Only one position is being advertised for this particular position (with fifteen potential work locations), but it is unknown how many other “Diversity and Inclusion Specialists” exist in various agencies wedged in this way.

In 8 days this POS will start looking for another people to fleece. The American people are done with this crap.

Does she ride a Harley?

She quit. They kept, um, disappearing.

I KNOW it must be wrong…WRONG, I say…but I can never look at Gina without thinking of Janet Reno…

Because they both look like sick twisted government bureaucrats from the former Soviet Union?

I notice the same thing.

They both get their hair cut by the same barber ~

For a second there I thought I’d got caught in a time warp. This is 1977 material, Carter adminstration redux. ‘Put on sweaters, people! Turn down that thermostat!’ Cheesy stickers put on the light switch plates inside gubbermint offices from DC down to Possum Holler NC telling us to ‘Save energy! Turn off the lights!’

The suggestion that we turn out the lights on government buildings is just as valid today as it was at anytime in the past. Maybe more so.

I HAVE NO PROBLEM turning out the lights in government buildings, just have to watch out that the U.S. Marshals don’t murder you.

“Turn out the lights on…” is a common euphemism for killing someone and I suspect your real name and identifiers just popped up on a screen at Langley or Fort Meade.

(Moves several chairs down the table from Anchovy).

LMAO! I’M IN GOOD COMPANY, But that’s what I mean about murder. I have no intent of hurting anyone, but I can’t trust the same motivations to my overseers, Uncle Sugar.

Gina needs to go to prison.

I have the feeling that she would do well in prison. I mean, live well and prosper, well.

We have lead in our water, and this twit is worried about plant food. Please, please, somebody replace that idiot with a chemist!

This never-ending onslaught of controlling regulations has made our American lives like trudging waist deep through molasses.

She’s a witch! And what do we do with witches?

Convert them via catalysis to fuel…???

Do we go to the FEMA camps alphabetically for re-indoctrination?

I am so tired of these freaking fools who blather about “justice” yet have NO CLUE what they’re talking about. My patience with these fools has worn thin.

McCarthy can just STFU and go away ~

AS a research chemist I can tell you that the majority of the scientific community is not convinced in the least that global warming is either real or caused by man. It seems inconceivable that we would create profound national policies based upon a politically driven “scientific” theory.
>
Second, it is a well established fact that there is a correlation between a living standard and the price and availability to energy. As energy becomes more expensive and/or more difficult to obtain, quality of life deceases significantly. What McCarthy is stating is that we should all prepare for a significant reduction in our lifestyles and be prepared to be more miserable just to save the planet.

I will be happy to help…as soon as the government proves they are serious themselves. Show me that you took a paycut and lowered the energy bills through all of the federal government buildings by 50% or better and we can start talking. Prove you are serious by being the first.

IOW freeze to death.
22 degrees (f) this morning, plenty of 20-30 deg mornings all october.
and its only going to get worse.

The Gorepocalypse is upon us. Save us, St. Albert!

Turn off the AC and heat in DC.

The people must suffer, however the elite ruling class will still be jetting all over the place, spewing tons of CO2 into the air. Not that it matters. CO2 is plant food.

“I don’t check out flat Earth society and I’m not talking to climate deniers….”

The hilarious irony of that statement is that it was once “settled science” that the Earth was flat.