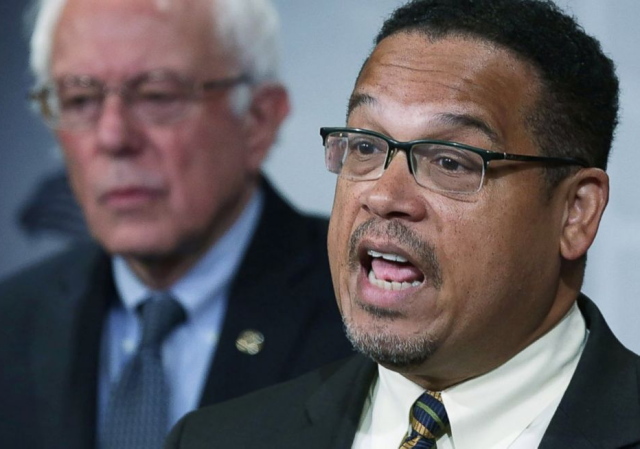 Bernie Sanders has thrown his support behind Minnesota Congressman Keith Ellison in the contest to lead the DNC. This should surprise no one because Sanders represents the radical far-left wing of the Democratic Party and that’s where Ellison would steer the party as chairman.

Sen. Bernie Sanders of Vermont went to bat Wednesday for Rep. Keith Ellison’s bid to become the next chairman of the Democratic National Committee, saying the status quo is not working and that the Minnesota Democrat has the gumption to move the party in a different direction.

Speaking at an event hosted by the American Federation of Teachers in Washington, Mr. Sanders said the Democratic Party must change course after losing so much ground in Congress and in statehouses across the country over the past decade.

“Brothers and sisters, the status quo is not working and we will not succeed if we continue along the same-old/same-old path,” Mr. Sanders said at a campaign event with Mr. Ellison. “Now is the time for real change in the Democratic Party.”

Ellison would be an awful choice for the DNC at a time when they need to win back white working class voters but sometimes you just can’t save people from themselves.

Like Sanders, progressive activist and writer Brent Budowski is pushing for Democrats to get on the left wing train.

Bernie Sanders is right about the DNC

Sen. Bernie Sanders (I-Vt.) is right, and certain people close to the Obama White House and the Hillary Clinton campaign are wrong, about the future direction of the Democratic National Committee (DNC).

The Sanders vision of the DNC is that it should be a popular-based center of organization and small-donor fundraising that supports Democrats at all levels of national and state politics and government, and promotes an agenda that offers a powerful alternative to the crony capitalism, insiderism, elitism and phony populism of President-elect Donald Trump.

A pure version of the Sanders vision is the new group he inspired, Our Revolution, an excellent organization that champions progressive causes and candidates.

The opposing vision of the DNC would continue the status quo of recent years, when it was far too focused on supporting the Obama White House and largely uninterested in supporting Democrats in Congress and at the state and local level.

Of course, after talking about leaving the past behind for a new and improved DNC, he says this:

The best formula, in my opinion, is an updated version of the Kennedys. Jack, Bobby and Ted all combined an insurgent style of mobilizing grassroots workers and voters behind a progressive agenda that appealed to both minority voters and white ethnic and working-class voters.

Nothing says party of the future like invoking Jack Kennedy, right?

I will give Bernie this much – he is a true socialist in that he can see a problem, then proscribe exactly the wrong solution for the problem.

“The best formula, in my opinion, is an updated version of the Kennedys. Jack, Bobby and Ted all combined an insurgent style of mobilizing grassroots workers and voters behind a progressive agenda that appealed to both minority voters and white ethnic and working-class voters.”

Says the commissar with 2 homes and a dacha on Lake Champlain.

Please, please do this.

I go back and forth between that reaction and the uneasy feeling that you and I might be like John Oliver begging Trump to run for President.

Be careful what you wish for. We might just get it.

And like Hillary Clinton spending millions to make sure she locked up the popular vote… we might not be so happy at having gotten what we wanted.

Come on, if you want to know whether Republicans should worry about Ellison, just ask yourself: how many working class white voters in the rust belt states are going to say “Hey, look, a radical left black muslim is the new face of the Democrat Party! I want me some a’ that!!!”

What’s really so amazing is that the left is so far out of touch that they can’t even see this. I should say, their ideology is so hidebound and all-encompassing that they can’t allow themselves to see this.

But who this will give fits to is that entire group of high dollar Jewish donors who have been providing the bulk of the financing for the DNC, like Haim Saban. He and those with him have already said they and their donations are walking if Ellison is selected. Between Saban’s cohort walking and the Unions collapsing, the DNC is going to find itself seriously short of funds very, very quickly.

(And just for those who may wonder, this is NOT some anti-semitic smear. I very much WANT Saban to realize that the best hope for Israel’s future is for him, and those with him, to throw their support to Trump. Trump will be better for Isreal than any US President, ever)

Good point Clintack and it is of particular concern should we have another recession which, of course, will be blamed on Trump, but will have far more to do with an adverse reaction to rising rates as well as equity and real estate bubbles created by years of free money. Should another recession occur the Sanders message, no matter how illogical, will resonate even more strongly with those left behind.

Last I saw, Bernie still had an (I) and not a (D) after his name. He should have as much say as Donald Trump in who the next leader of a party he doesn’t belong to.

So the “fundamental transformation of the country” has already become the “same-old same-old”, huh?

Yeah, let’s get this race war started, shall we? “Real Change!”

Might want to note that Brett Budowski is/was one of Podesta’s BFFs in the Wikileaks email releases.

Sadly this could work…Obama got the votes that Hillary did not. Dems are lazy enough to just sit at home during an election and complain unless they get their perfect PC candidate.

Ellison is an ally of the Muslim Brotherhood. I’m not sure that would be much of a change at the DNC though.