Bad day for Ellison as he has two horrible TV interviews about Farrakhan and Israel statements. 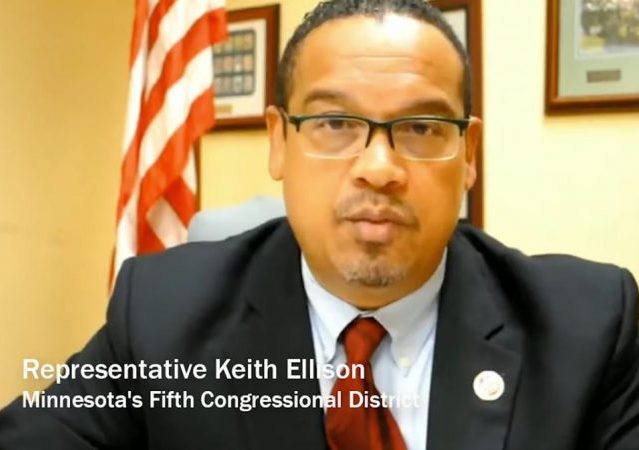 Ellison’s past decade-long support for Louis Farrakhan and the Nation of Islam, his suggestion of dual loyalty from American Jews when speaking at a fundraiser for Muslim leaders, and his cozy relationship with some of the worst pro-BDS, anti-Israel groups, has disrupted what seemed like a clear trajectory to DNC Chair.

And then Obama-Biden sent signals they were encouraging Labor Secretary Tom Perez to seek the position.

The accumulation of controversies threatened Ellison’s DNC bid with a political death spiral.

That spiral got no relief today, as Ellison continued to try to defend his Farrakhan days by accusing those who uncovered his history of a “smear” campaign.

Candidate for DNC Chair, Rep. Keith Ellison of Minnesota, defended himself from charges of anti-semitism on Wednesday morning’s ‘Morning Joe.’

He called reports of his connection to controversial black minister Louis Farrakhan “bad reporting,” and a distraction. Ellison is being accused of anti-semitism because he praised Farrakhan for organizing the Million Man March in a 1995 op-ed.

“I have a ten year record in Congress,” he said. “It is just that kind of reporting that is not quality and doesn’t help people understand the real issues.”

“What does he have to do with anything going on in this race?” Ellison asked about Farrakhan. “Absolutely nothing.”

“We’re talking about something that happened in 1995. This is a year when the Million Man March took off — people were attacking it. I was very proud to be a part of it. But here I am having to answer questions about this, and I’m not talking about what our country needs to do and what the Democratic Party needs to do, because of this smear campaign from 20 years ago.”

“This is about distracting people and taking people away from the issues at hand,” he said.

Not good. Apologize, but don’t accuse others of a smear campaign when the facts of Ellison’s history are so demonstrable.

Then Ellison made the problem even worse by again making the claim that Israel uses American Jews to do its bidding, as he did in a 2010 fundraiser for Muslim leaders. Chris Cuomo wondered, during the interview, why he was singling out American Jews.

Combined with Ellison’s current coziness with anti-Israel groups, it again raised a troubling aspect of his life.

RCP again has the report and video, Ellison: Israel Has Used Our Democratic System “To Advance Their Policy Views” (emphasis added);

“I was talking to a group of people who asked me how they could look at the Jewish community as a model for political empowerment,” Ellison said….

CHRIS CUOMO: ….you gave a speech in 2010 where you said that U.S. foreign policy in the Middle East is governed by what’s good or bad for a country of 7 million people which people take to mean Israel. And that this was seen as you having a hostility toward the U.S. relationship with Israel, and that you were turning a blind eye to the value of that relationship, and you were favoring the Arabs essentially over the Jews.

REP. KEITH ELLISON (D-MN), CANDIDATE FOR DNC CHAIR: No, absolutely not. As a matter of fact, I was talking to a group of people who asked me how they could look at the Jewish community as a model for political empowerment. In fact, I’ve been to Israel seven times, voted for bilateral aid to Israel to the tune of $27 billion. And I have supported Israel’s U.S. joint defense pact over time.

But I’ll tell you this, there’s a lot of people around the world and around our country who look to the Jewish community as a community that has used this democratic system order to offer its policy ideas, and that’s the question that was posed to me. But —

CUOMO: What does that mean? Because who doesn’t use the system to advance its own agenda? That’s what people do, that’s what constituencies are.

There’s nothing wrong with any group of Americans using our democratic system in order to advance their policy views. And if some groups like, you know — there’s various groups that are effective. I mean, this is something that this is a skill that should be developed, and strengthened, and people who are more successful should be looked to — towards as models.

And just tonight it was announced that Perez will announce tomorrow that he’s seeking the DNC Chair:

Labor Sec. Tom Perez will formally declare his candidacy for the chairmanship of the Democratic National Committee on Thursday, according to a source familiar with his plans.

He’ll do so on a conference call hosted by state party chairs supportive of his candidacy, the same source says. NBC News reported Tuesday that Perez planned to enter the race, which has so far been dominated by Minnesota Rep. Keith Ellison, this week….

Encouraged by the Obama White House and others, Perez has bided his time entering the race as he sussed out support among the roughly 450 members of the DNC and from other party leaders across the country.

Top Democrats uneasy with Ellison have been privately offering their support and encouragement to Perez, who has been closely following the leadership race while also considering a gubernatorial run in his home state of Maryland.

The pressure campaign may have worked. Perez has been working the phones aggressively in recent days is said to be eager to get his message out before politicking slows for the holidays. as Wednesday

Perez’ entry would set up a heavyweight bout between two progressives of color who each hail from different sides of the Democratic Party’s establishment-outsider divide. Ellison was a loyal Bernie Sanders supporter in the presidential primary, while Perez was a vocal Hillary Clinton backer.

Ellison’s DNC Chair chances aren’t down the drain yet, he still has backing from the Bernie faction of the party, but he’s definitely circling the drain.

Here’s to a long, bitter struggle.

“This is about distracting people and taking people away from the issues at hand,” he said.

In other words…Dimocrat party SOP.

I think we conservatives should do our part to help Keith Ellison. I think he truly would represent the Democrats the best — he would be their truest voice, in my opinion. So, let’s help him be elected as the DNC Chair. My small contribution is a neat little slogan: “Keith Ellison: The Right Voice, the Right Choice”. (Note the subtle little irony involved.)

A sick guy, perfect for a sick political party.

Be mindful of what you wish for, sickness tends to spread

I pray they select him.
They deserve him.

I’m not Jewish but I support Israel as the island of liberal democracy and enlightenment in a sea of Islamic intolerance, backwardness, oppression, and ignorance. Does that mean I have divided loyalties?

I am so disappointed to hear that Democrats are failing to go lemming like into a bad choice.

My two cents to Dems: you lost Michigan – pick a well-known Democrat from that state well-respected in his district.

Wasserman was just the beginning 🙂

The mere fact that Keith Ellison, an anti-semite Muslim, was seriously considered for the post of DNC Chair says volumes about the current state of the Democratic Party USA.

It is hard to fathom why Ellison’s backers have been pushing him so hard with all this baggage, but given that the left always views things in purely racial terms, this is about the only explanation that flies. With Obama leaving office, leading Dems are desperate to find a photogenic black man who can serve as the public face of their party. I think it’s really that simple.

Now the amusing thing about them picking Perez is that he’s the Bureaucrat’s Bureaucrat. He is the master at political infighting and heavy handed behind the scenes maneuvering – but a leader? The highest elective office he has ever held was City Councilman somewhere in Maryland, I think. He knows nothing about campaigning, and has never done it. So go ahead dems, by all means pick Perez!

If they want a telegenic Black man to lead the party, I know of one that will be out of a job on January 21.

Ellison supported Bernie and rejected HRC very early in the process. HRC, of course, was BHO’s hand picked successor to be the nominee. So Ellison rejected both BHO and HRC by supporting Bernie.

This is a proxy fight between BHO/HRC and Bernie. The media would breathlessly be reporting it as a “war” if it were happening at the RNC.

what a damn shame: he’d have been perfect for the j*b.

Dang, I was hoping the fools would actually pick him.

How about Obama!!! He be perfect for the job–and he can even bring his helper and all her wigs along !!! ABJ

Ellison supported Sanders? Do I need to point out that Sanders is not a member of the Democratic Party?