Following the Clinton playbook on how to deflect inconvenient facts.

Legal Insurrection readers have known for weeks about the controversial past of Keith Ellison, including support for Louis Farrakhan, being the go-to Congressman for anti-Israel groups, and statements suggesting it made no sense to base Mideast policy around Israel:

So long as the controversy was talked about only among pro-Israel websites, Ellison and his supporters probably figured they could ride it out. But now it’s gone deep into the mainstream media.

CNN’s Andrew Kaczynski, who used to be Buzzfeed’s deep diver into internet archives, reported on the Nation of Islam story and source material on December 1, 2016, Rep. Keith Ellison faces renewed scrutiny over past ties to Nation of Islam, defense of anti-Semitic figures:

Rep. Keith Ellison’s past ties to the Nation of Islam and his defense of its anti-Semitic leader, Louis Farrakhan, are resurfacing as he campaigns to lead the Democratic National Committee.

Ellison, the first Muslim elected to Congress, publicly renounced his association with the Nation of Islam in 2006 after it became an issue during his run for Congress, when local Republican bloggers began publishing his old law school columns and photos connecting him to the organization….

ut several outlets have resurfaced Ellison’s past writings as he runs for DNC chair, raising new concerns about his own views and what they would mean for the Democratic Party if he were to be its leader. A CNN KFile review of Ellison’s past writings and public statements during the late 1980s through the 1990s reveal his decade-long involvement in the Nation of Islam and his repeated defense of Farrakhan and other radical black leaders against accusations of anti-Semitism in columns and statements to the press. None of the records reviewed found examples of Ellison making any anti-Semitic comments himself.

Our prior posts detail much of that history. However, Kaczynski uncovered more:

In one scathing column from 1990 unearthed by CNN’s KFile, Ellison accused the university’s president of chilling the free expression of black students by openly criticizing a controversial speaker invited to speak on campus by the Africana Student Cultural Center. That speaker, Kwame Ture (also known as Stokely Carmichael), had publicly claimed that Zionists had collaborated with the Nazis in World War II and has been quoted as saying “Zionism must be destroyed.”

University of Minnesota President Nils Hasselmo said he “personally found the statements in Ture’s speech concerning alleged Zionist collaboration with the Nazis deeply offensive.” Ellison, writing under the name “Keith E. Hakim” for the Minnesota Daily, the student newspaper at the University of Minnesota where Ellison attended law school, argued that Hasselmo “denounced Ture’s comment without offering any factual refutation of it,” and defended Ture’s right to speak on campus and to question Zionism.

Ellison wrote, “Concerning Zionism and Ture’s speech, the ASCC’s position is simply this: Whether one supports or opposes the establishment of Israel in Palestine and Israel’s present policies, Zionism, the ideological undergirding of Israel, is a debatable political philosophy. Anyone, including black people, has the right to hear and voice alternative views on the subject — notwithstanding our nominal citizenship.”

He added, “Alternatively, the University’s position appears to be this: Political Zionism is off-limits no matter what dubious circumstances Israel was founded under; no matter what the Zionists do to the Palestinians; and no matter what wicked regimes Israel allies itself with — like South Africa. This position is untenable.”

According to an account by the Anti-Defamation League, Ture said in his speech on UM’s campus that “the Zionists joined with the Nazis in murdering Jews, so they would flee to Palestine.”

What’s interesting it that the anti-Israel rhetoric Ellison used in 1990 is very similar to the rhetoric used by the most extreme anti-Israel activists, like Max Blumenthal, use today to justify destruction of Israel . In particular, the accusation of collaboration between Zionist and Nazis (which has been debunked) has rocked the British Labour Party recently

The publicity has caused liberal Jewish groups who were favorable towards Ellison’s DNC bid to back away, as the NY Times reports:

Representative Keith Ellison is facing increasingly vocal resistance to his bid to become chairman of the Democratic National Committee, with Jewish groups and some labor unions expressing unease about making the Minnesota liberal a face of the opposition to Donald J. Trump.

As Democratic state leaders gather here Friday for what will effectively be the first audition to take over a party still reeling from last month’s election, a disparate coalition is going public with concerns about Mr. Ellison, who has won support from some of the most prominent figures on the left and emerged as an early favorite in the committee race.

After initially mixing praise and criticism for Mr. Ellison, the Anti-Defamation League on Thursday effectively came out in opposition to his candidacy, citing remarks he made about Israel in a 2010 speech that the anti-discrimination group termed “disqualifying.”

Ellison is pushing back, Keith Ellison defends comments about Middle East in open letter to ADL:

In Ellison’s open letter to the ADL, he said his 2010 comments were “selectively edited and taken out of context by an individual the Southern Poverty Law Center has called an ‘anti-Muslim extremist.'”

“I wish we could have spoken once again before your most recent statement. If given the opportunity, I could have provided a full and proper explanation,” Ellison wrote in the letter. “My memory is that I was responding to a question about how Americans with roots in the Middle East could engage in the political process in a more effective way. My advice was simply to get involved. I believe that Israel and the U.S.-Israel relationship are, and should be, key considerations in shaping U.S. policy in the Middle East.”

Ellison, who said he was “saddened” by the ADL statement, added that he wanted to meet soon with Greenblatt “to discuss our shared beliefs and commitment to fairness and justice,” and said he was “committed to building a strong relationship with you.”

Ellison added that he thought the comments were being surfaced by unnamed “right-wing interests to drive a wedge between long-standing allies in the fight for equal rights.”

“My record proves my deep and long-lasting support for Israel, and I have always fought anti-Semitism, racism, sexism, and homophobia – the same values embodied by the Anti-Defamation League.”

An open letter to the Anti-Defamation League. pic.twitter.com/bCDQ5Y8UPq

It’s interesting that Ellison is trying to shoot the messenger on this release of his 2010 audio. That messenger is Steve Emerson of the Investigative Project on Terrorism. When I wrote about the audio, I emailed Ellison’s press people for comment and asked whether Ellison thought the audio was taken out of context. They never responded. Perhaps Ellison’s people thought as long as it was *just a blogger* asking about it they could ignore it, but now that it’s in the mainstream, they’re going full right-wing conspiracy and claiming the quote was out of context.

This morning Ellison also had an op-ed in The Washington Post blaming a “right-wing smear campaign,” Rep. Keith Ellison: I should have listened more and talked less:

Unfortunately, some political opponents continue to distort my record based on an old right-wing smear campaign — not my work in Congress, or my vision for the future of the Democratic Party….

I saw the Million Man March as a positive effort and I helped to organize a group from Minneapolis to attend. Like many young African American men at the time, including President Obama, I hoped the march would promote change in our communities, and I was proud to be part of it. Civil rights leaders, from Rosa Parks to Jesse Jackson, and artists such as Stevie Wonder and Maya Angelou supported and spoke at the event. Of course, a huge number of black men — some counts as high as 1 million — showed up as well.

My values — going back to my childhood — were always based on respect for all people and rejection of bigotry and racism. When I first heard criticism about Louis Farrakhan, the leader of the Million Man March, I felt the march’s message of empowering young African Americans was being attacked.

But I clearly didn’t go deep enough. I defended the organizer of the march in writing, but I glossed over the hurtful and divisive language he directed at other communities.

The excuse that he was unaware of just what Farrakhan was just doesn’t hold up. By the time of the Million Man March in October 1995, the media had been saturated for years with criticisms of Farrakhan’s anti-white, anti-semitic rhetoric. 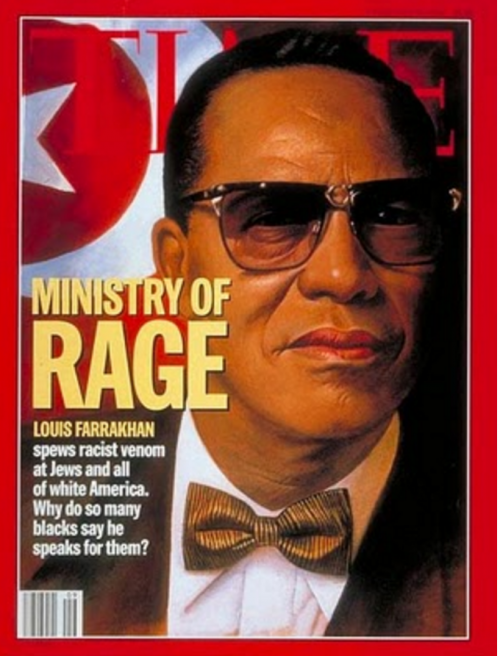 The “right-wing” also didn’t force Ellison to cozy up to anti-Israel groups like the U.S. Campaign to End the Israeli Occupation (now rebranded as the U.S. Campaign for Palestinian Rights) and American Friends Service Committee.

The right-wing also didn’t force Ellison to participate in the main anti-Israel event at the Democratic National Convention last summer.

There is no vast right-wing conspiracy. There’s just history.

The Ellison controversy, however, is not just about Farrakhan and Israel. It’s about how far left the Democratic Party will move.

The *vast right-wing conspiracy* should be praying that Ellison becomes the face of the Democratic Party.

Well I guess that leaves no doubt that he is among the most qualified democrats ever.

Read the comments section on Ellison stories at sites like Salon.com. The level is anti-semitism amongst the hard left is truly astonishing.

Anyone citing the SPLC as part of his/her defense should be closely scrutinized.

Obviously this addresses the Democrats’ problem of not being Left Wing enough.

Good. Make Ellison the head of the DNC. That’ll really help the dims appeal to the white working class supporters who defeated Hillary… the dims have learned nothing.

Ellison really wants the job. Probably sees it as another way to bring Islam and the Shariah further into America.

He should be the DNC chairman. After all, he represents the viciousness and loony-ness of the Democrat Party. Along with the arrogance. And the incompetency.

He’s got my vote.

And if the Dems reject him, we can accuse them of Islamophobia and racism.

I worked the second Obama Convention. The amount of antisemitism and hatred for Israel was pervasive.

If the Democrats had any sense they’d abandon the Clinton playbook altogether, but they don’t and won’t anytime soon.

Right wing smear machine? Knowing Ellison, there have to be some Jews, er, Zionists hiding in there somewhere.

This is happening as Schmuck Chumer is pulling out another “war on” theme.

They just can’t help themselves.

War on senior citizens by virtue of entitlement reform. Trump and the GOPe want to kill grandma and grandpa or at least make them subsist on dog food and green bread till they expire naturally.

I fully support Ellison to lead the dnc. perfect fit.

YES !!!! Go Ellison–Become head of DNC –and show the folks where the dems really stand!!! I am rooting for you, Keith, and looking forward to you winning the DNC in a landslide !!!!! ABJ