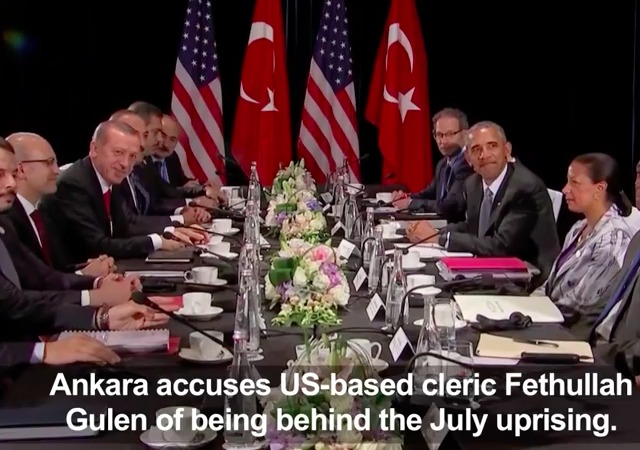 In July, the Turkish military attempted a coup to take out President Recep Tayyip Erdogan’s regime. They failed, which led to a crackdown by the government and a purge of anyone the government felt had ties to scholar Fetullah Gulen, who they feel devised the coup. Erodgan has railed against the West for not standing with its NATO ally, but that all changed this weekend.

President Barack Obama met with Erdogan and promised the U.S. will help bring the coup plotters to justice.

Obama, speaking at the G20 summit in China, praised the Turkish people who resisted the coup attempt, saying they “affirmed their commitment to democracy” and that they are “the strength and brilliance of democratic institutions.”

Obama also said he was glad that Erdogan was safe and able to participate in the economic summit, in what appeared to be a better exchange than the one Erdogan had recently had with Vice President Biden regarding the extradition of controversial cleric Fethullah Gulen, who lives in Pennsylvania.

In a vague reference to Gulen, Obama said the Justice Department and U.S. national security teams “will cooperate with Turkish authorities to determine how we can make sure that those who carried out these activities are brought to justice.”

The Turkish government has told the U.S. government in the past that keeping Gulen from Turkey is a “hostile act.” Gulen lives in Pennsylvania after he imposed a self-exile in 1999 to escape the regime before Erdogan came to power. But the U.S. said it would only extradite Gulen once the Turkish authorities provide proof that he had direct involvement with the coup.

Erdogan said the government is currently gathering all the evidence “indicating Gulen orchestrated the plot from afar.”

The Turkish authorities have purged hundreds of thousands of people from their jobs, including shutting down 131 media outlets that didn’t toe Erdogan’s line.

However, only a few days after the attempted coup, European Commissioner Johannes Hahn told the media that he believed Erdogan prepped the purge list before the coup:

In August, a Turkish court officially issued an arrest warrant for Gulen. But, again, until the government provides the U.S. with the proper evidence, the authorities will not hand over Gulen.

Gulen remained an ally of Erdoğan until 2013 when the courts launched a corruption investigation against the then-prime minister. Erdoğan quickly squashed the investigation, but blamed his old ally “for orchestrating the scandal.”

…until the government provides the U.S. with the proper evidence, the authorities will not hand over Gulen.

‘Proper evidence’…in other words, the ‘proper made up evidence’.

It’s not up to 0bama. No court is going to let him be extradited without a prima facie case being made against him.

They let an amateur film maker get jailed for a year on a probation “violation” to cover some sorry asses over Benghazi, so I’d say that the definitions of probable cause and due process are as fluid as obongo’s sexuality when it comes to Gulen.

I learned a lot about what is happening in Turkey after reading this guy’s blog: http://rodrik.typepad.com/dani_rodriks_weblog/2016/07/is-fethullah-g%C3%BClen-behind-turkeys-coup.html

Roderik is a professor of econ at Harvard university, but was born in Turkey and has great insight on the politics there. Follow the links to find out why he says:

“Gulenists were heavily involved in – and quite likely stage managed – Sledgehammer and many other similar sham trials accumulated. By now it should be clear to any objective observer that the Gulen movement goes much beyond the schools, charities, and inter-faith activities with which it presents itself to the world: it also has a dark underbelly engaged in covert activities such as evidence fabrication, wiretapping, disinformation, blackmail, and judicial manipulation.”

That sure was one fish coup….what if it turns out that Erdogan was responsible for it?

We should have supported the plotters, if we knew who they were, and we certainly shouldn’t be helping him put them down.

If (as it is highly suspected) the coup was actually a fake designed to allow Erdogan to grab dictatorial powers, the US would have been (censored) far worse than it is now, and would be in the wonderful situation of having a NATO country with nuclear weapons really, really peaved at the current administration.

Sad as it sounds, the Obama administration probably did the right thing here by freezing into an incoherent lump of jelly when the coup happened and not making any real decisions until it was over. All hail King Log.

“Round up the usual suspects.”

…until the government provides the U.S. with the proper evidence, the authorities will not hand over Gulen.

Dan Rather is right on it.

If Obama said anything about “red lines”, then Gulen is perfectly safe.

Nothing Obama says is of much significance; he just likes to hear himself talk. However, the US and Turkey do have an extradition treaty, properly ratified with the advice and consent of the Senate in 1979. Extradition for “political crimes” is specifically disallowed, but with a caveat in Article 3.1.a—

… any offense committed or attempted against a Head of State or
a Head of Government or against a member of their families shall not be deemed to be an offense of a political character.

This was probably intended to cover assassination attempts, but if Erdogan can throw up enough smoke and mirrors to make a seemingly reasonable claim that the coup attempt was a crime against him personally, he might be able to make a case. Maybe.

The only thing of significance Obama says are his threats against our freedom and way of life.

He is the small person, minor intellect, morally clueless, marijuana-syndrome affected fraud and Manchurian Candidate many of us knew he always was.

Obama hassomething significant in common with Erdogan’s nation: both are turkeys.

Is that our job? Isn’t that their job?