Turkey Government Rails Against the West For Supporting Failed Coup

Turkey Government Rails Against the West For Supporting Failed Coup

Our NATO ally continues to blame us…. 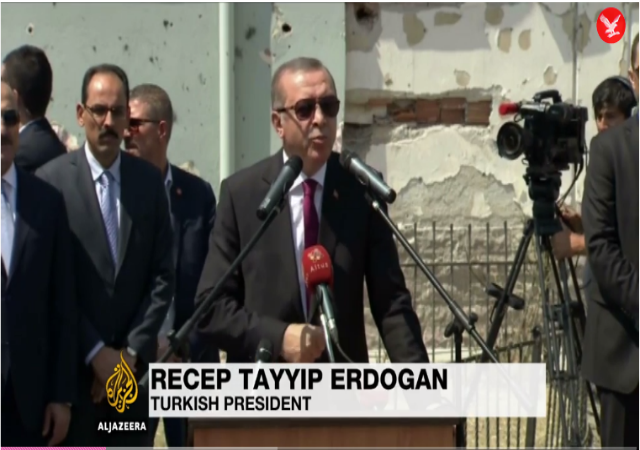 Turkish President Recep Tayyip Erdoğan has continued his rhetoric that the West had a hand in the failed coup three weeks ago.

Why is all of this important? Turkey is still a member of NATO and the U.S. uses their base to strike ISIS in Syria. He said:

“The West is supporting terrorism and taking sides with coups,” Erdogan said, adding that forces unhappy with Turkey’s rise as a regional power were behind the coup.

“They have actors inside (Turkey) but the scenario of this coup was written abroad,” he said during a speech at an event for foreign investors in Ankara.

He still blames the Gülen Movement, led by scholar Fehtullah Gülen, who lives in Pennsylvania. He continued by saying he misjudged the movement, implying they are more dangerous than anyone thought:

“Look, if it was said 20 years ago, 15, 10 or even three-four years ago, believe me, I had not thought that much [about a coup attempt]. Unfortunately, we were seriously mistaken. May God forgive us,” Erdoğan said during an interview with private broadcaster ATV, referring to the alleged role of the movement in the failed coup attempt.

He took shots at the U.S. for allegedly hiding and protecting Gülen:

Speaking in Ankara during a high level meeting with international investors, “What kind of partners are we if you request documents when we ask for a terrorist?” Erdoğan asked the U.S. administration who has been asking for evidence to extradite Gülen.

Justice Minister Bekir Bozdağ sent another extradition document to the U.S. over Gülen:

“They requested certain information following our first letter; we provided answers to the question ‘why is it urgent,”‘ Anadolu quoted Mr Bozdag telling reporters in parliament, adding Turkey had intelligence indicating Mr Gulen might leave for a third country.

“I hope that the United States decides in Turkey’s favor, in line with democracy and the rule of law, and returns this leader of a terror organization to Turkey,” he said.

However, it is not easy for the government to extradite a person:

Lawyers at the State and Justice departments would review it to determine if the alleged offense is a crime in both countries and whether it falls within the scope of the countries’ extradition treaty. The request would then go before a judge, who would rule on whether probable cause existed that a crime was committed and that the accused person did it.

If the request survived those tests and is found lawful, it would still need to get the approval of U.S. Secretary of State John Kerry, who can consider non-legal factors, such as humanitarian arguments.

The U.S.-Turkey extradition treaty went into force in 1981 and covers any offense punishable in both countries by more than a year in prison. It does not cover offenses “of a political character,” although it does cover “any offense committed or attempted against a head of state or a head of government,” according to the treaty.

Erdoğan also claimed he sent over 4,000 files to German Chancellor Angela Merkel about terrorists in the country. She has not responded to his request.

The West did show support for the Turkish government during and after the coup, but things have cooled because Erdoğan has purged over 50,000 people and detained almost 20,000 people without any evidence and denying them access to lawyers.

If there are any nukes left at the US airbase in Turkey – a whole lot of people in the Pentagon need to be cashiered out of the service.

Blackmail will commence in …

I don’t think so. Erdogen and Obama close buddies, fellow friends of the Muslim brotherhood and all that.

Or… maybe the coup members gave a heads up to US gov and Obama (really really best friends with Ergodan) tipped him off about the attempt?

1) How do you know Gülen hasn’t been playing some Turkish equivalent of checkers?
2) What makes you think he had anything to do with the coup?
3) If he was behind the coup, and if the CIA did know about it, so what? Why should they have lifted a finger to stop him?

But no, it wasn’t Gülen, he’s just as Islamist as Erdo&gbreve;an, and the coup was probably the work of whatever remained of the traditional army secularists, after Erdo&gbreve;an’s previous purges. The Turkish army is supposed to be the country’s guardian against Islamism, stepping in whenever elected government goes off the rails, setting things in order, and stepping back out again. Unfortunately Erdo&gbreve;an has destroyed this function, probably forever.

Oops, &gbreve; doesn’t seem to work. How about ğ?

Why on earth would Obama want to overthrow Erdogen? He’s been turning Turkey into an islamic state and depressing and limiting the democracy there since he was first elected. I would expect, instead, that Obama is watching Erdogen’s movements and taking notes. Obama ADMIRES dictators: Castro and Chavez for sure and, I suspect, probably Erdogen as well.

After Egypt, Libya, Ukraine, Syria, and mass immigration to Germany, France, America, etc., who can blame him.

“Turkey Government Rails Against the West For Supporting Failed Coup”. If only. The west should have supported the coup. But it didn’t, and this is its reward.

Turkey is in Nato to deny Russia access to the Mediterranean or provide a starting point for air raids into Afghanistan? Maybe NATO and John McCain have both outlived their usefulness.