As of morning (Saturday) in Turkey, coup appears to be faultering 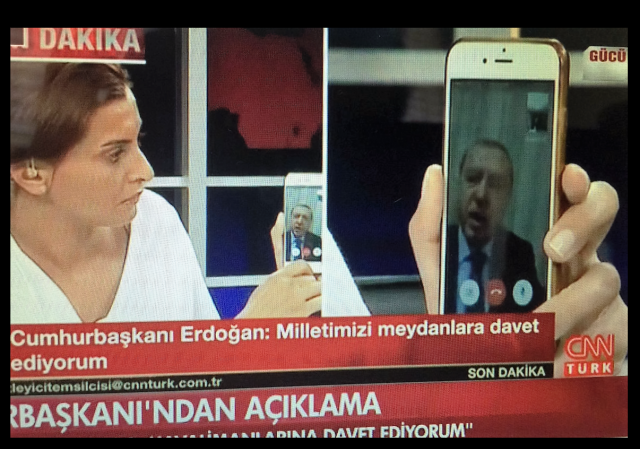 There was an attempted coup in Turkey on Friday.

Military officials backing the coup claimed initial success, but as events developed during the day Friday, the coup appeared to faulter and be on the verge of collapse.

Here are the latest events on Friday. After returning to Istanbul airport, Erdogan appeared on television and proclaimed that he still was in control and the coup would fail:

Erdogan says those who staged a coup attempt will pay the highest price, will answer for this treason.

Erdogan says this insurgency "is a blessing from Allah, because it will allow us to purge the military" from mutineers.

Erdogan: I was in Marmaris and they bombed there. They thought I was still there.

Erdogan: They took away my secretary general. I don't know the fate of the army chief.

LIVE — Presisdent Erdoğan: This [Gülenist] structure has nestled in Turkey's military, police, state institutions since the past 40 years

Videos of detained coup soldiers are on social media:

Police detain most of the soldiers involved in attempted coup as Turkish nation fights back https://t.co/nqHKnoC6uA pic.twitter.com/uNVFFfjGQx

BREAKING: Report: Soldiers fire on people trying to cross Istanbul's Bosporus bridge in protest of the attempted coup, some have been hurt.

Erdogan gave an interview via FaceTime:

President Erdogan: This is an uprising within our armed forces.

President Erdogan: I call on our people to gather in squares, airports.

Erdogan making a statement through Facetime. Says the military coup will be thwarted. Perpetrators will be punished. pic.twitter.com/d5dmVfMMV8

He may have tried to seek asylum in Germany:

Statement from Turkey armed forces: "Turkish Armed Forces have completely taken over the administration of the country…" 1/x

"…to reinstate constitutional order, human rights and freedoms, the rule of law and the general security that was damaged." 2/x

"All international agreements are still valid. We hope that all of our good relationships with all countries will continue." 3/3

A Turkish soldier tells people to go home and that it is "not a drill." pic.twitter.com/CuI9gKBq3L

The military has always been a secular force. Wait and see.

Sounds like someone dusted off the Kemal Ataturk handbook. This used to be a regular feature of Turkish government. Islamists would get to a certain level and the military takes out the trash.

PS: This is exactly the behavior required by our military’s oath to defend the Constitution (not the government) against domestic enemies. It should have happened with Obama by roughly July 4 2009.

They’ve positioned themselves as defenders of the Turkish constitution and a secular government for the last 50+ years. People love to blather on and on about democracy but we’ve seen “democracy” in action in the middle east and it’s nothing more than mob rule with zero protections for minority religions or opinions.

I’ll go out on a limb here and say that looks pretty coup-ish.

Good, hope its successful. Erdoğan took the country in an Islamic fundamentalist direction.

Hard to tell whether it’s good or bad. if it’s more radical Islamic elements then good. If not then bad.

Did you get that backwards?

(In my best Ray Stevens, ) Yes Ah did. Sorry Ethyl.

The coup itself may be justified, but the military has gone too far.
They have blocked social media!
https://techcrunch.com/2016/07/15/facebook-twitter-and-youtube-blocked-in-turkey-during-reported-coup-attempt/?ncid=rss&utm_source=feedburner&utm_medium=feed&utm_campaign=Feed%3A+Techcrunch+%28TechCrunch%29&utm_content=FaceBook&sr_share=facebook

Godspeed to the Turkish people. They’ve been a good Allie in the past.

why is the american ambassador tortured and murdered?

The Turkish military…like the Egyptian…has a strong British history and culture, and they were steeped in the Atta-boy-turk (sorry, couldn’t resist) tradition of Westernization.

The good old boys in Corlu might not forgive you, yet the LI crowd will. Back in the day, Ataturk will highly revered and to smear his name in any form would have been unforgivable; not safe at any time.

Still a Texan Good Ol Boy could be forgiven for his lack of worldly awareness. 😉

The best thing that could happen for Turkey, and now they can follow Egypt’s example. A quick speedy trial and then prison or death. You can bet that the Globalists will whine about this though, but perhaps democracy will win this time around. Members of Western culturals should find this coupe encouraging, IMO. First Egypt, then England and now Turkey… Who knows what Obama’s future will be?

I don’t think Barry is going to like this. First he loses Morsi, then Putin takes over Syria, then Bibi wins, then the Brexit, now maybe Reccep goes. He’ll definitely throw one of his tantrums.

Obama is on a major losing streak. Erdogan is an Islamic thug and the world is better off without him.

As I said above, he (and Hildebeeste, and Trump) should be worried about the precedent reminding our military what it should do with obvious domestic enemies violating the Constitution.

I wish I could offer more than one up-tick.

And didn’t he just endorse Hillary?

The Islamists who have been so happy to inflict their poison on the country over the last few years are now in exposed positions where they will have to run in order to keep promoting their violent oppression of others.

Guess who I expect to offer them amnesty. Hint: he has a phone and a pen.

I was a bit surprised when the army didn’t do this a couple of years ago, when Erdogan started aggressively retiring (presumably “unreliable”) officers.

Good coverage from random people on the Internet:

Any idea how this will play out at Incirlik? That’s primarily a foreign air base but the Turks do have units stationed there.

For the sake of our President and news anchors nationwide, let’s hope they get someone in power that has an easier name to read from a teleprompter.

I wonder what the final straw was for the military. They’ve tolerated a lot of crap from Edrogan and something must have triggered this. It seems to be very well coordinated, taking out Edrogan’s stooges in the military first and then going after the government.

Turkish high command, back in the day, almost exclusively, its Army, probably has had it with Erdogan. When he first got national power, he started to get rid of the military command that didn’t bow to his dictates. And, that has kind of continued. It was pointed out tonight that Erdogan was the one who negated our 4th ID going into Iraq via Turkey.

Erodgan is an Islamist first and foremost, the military is sworn to uphold Ataturk’s concept of a secular government for Turkey and Erdogan acts to overthrow that.

If the military gains control, Erodgan is going to be running for cover and el Obama probably will give it to him. Morsi was Egypt’s version of Erdogan and he was much beloved by our own Islamist Obama.

However, make no mistake, Turkish military is very nationalistic and that comes first before anything else in the traditional sense. So, this coup effort is balancing on a tight rope, very much so.

Yet, my guess is that the Islamist attacks on Ataturk National Airport became the tipping point, leading to this coup; more than the high command could accept.

If this coup fails (as it looks like it might), Erdogan and his Islamist allies will wade through blood in retribution. Expect show trials, executions, and army officers vanishing, along with their families.

I’m surprised this is happening now given Erdogan’s purges of the military’s officers. I would have thought there was nobody left to resist.

It is my understanding that Erdogan isn’t chummy with the Gulenists in the army like he used to be, and they are the ones attempting to stage the coup. If that is correct, than the coup succeeding would actually push Turkey further away from a secular government since Gulen and his followers seem to want a more Islamic state.

John Batchelor had a good segment about it:
Terror in Nice, Turmoil in Turkey. Indecision in Trump https://audioboom.com/boos/4825776-terror-in-nice-turmoil-in-turkey-indecision-in-trump-sebgorka-author-defeating-jihad-thomasjoscelyn-followfdd-malcolm-hoenlein-liz-peek-fiscal-times?utm_campaign=detailpage&utm_content=retweet&utm_medium=social&utm_source=twitter via @batchelorshow

The accusations are that this is a military coup by followers of Fethullah Gülen, an Islamist. If true, then I am not surprised that the coup failed. I doubt they had enough followers to accomplish the follow up required after the coup was started.

Unlike the supposed earlier coup objectives, this coup would not appear to be a a coup attempt to reinstall secular rule.