“Don’t let Hillary leave you protected with nothing but a phone.” 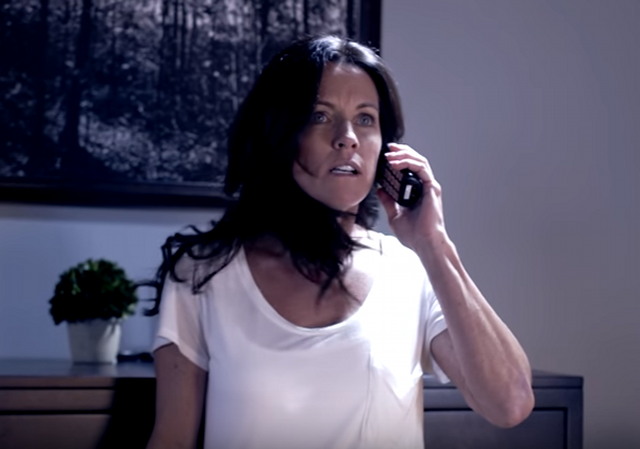 NRA warns voters that Clinton will leave them unprotected

The National Rifle Association’s new spot is aimed at people who are already afraid, and hammers Hillary Clinton for wanting to leave them defenseless.

The gun rights group said it’s spending $5 million to run the spot on national cable and on regional stations in Pennsylvania, North Carolina, Nevada, Ohio and Virginia. The ad does not mention Donald Trump, who the group endorsed in May. But it does dovetail with messages that both he and the NRA have delivered before, casting Clinton as an elitist who would take away individuals’ guns while benefiting from armed protection herself.

The ad, called “Nightstand,” shows a woman, alone in bed, awakened in the night by an intruder. She dashes for a landline phone, and a gun stored in a safe. But it fades away before she can grab it.

A narrator says the average 911 response time is 11 minutes.

“Hillary Clinton would take away her right to self defense, and with Supreme Court justices, Hillary can,” the narrator says. “Don’t let Hillary leave you protected with nothing but a phone.”

Self defense against other people has become the top reason for gun ownership in the United States, according to a new study from Harvard and Northeastern University researchers. About two-thirds listed that reason for owning guns in 2015, The Trace reported, and handgun ownership has risen proportionally compared with rifles. That’s despite drops in violent crime over recent decades.

Watch the spot below:

See our prior posts on effective NRA ads:

Hillary Clinton swears up and down that she doesn’t want to repeal the Second Amendment but she doesn’t have to do that to reach her goal. All she has to do is bury it under new regulations and fees.

House Democrats are standing at the ready.

Well done. I am so tired of seeing women, gays and even other minorities back democrats who release felons and infiltrate refugees who want to kill aforementioned women and gays.

At some point you want to shake them and yell “what the heck is wrong with you?!!”

This needs to be seen by the low information voters who normally get fed only MSM lies. Powerful.

Went to an outdoorsman show back in January when the primaries were in full swing. There was an NRA stand and the gentlemen running it worked for the NRA at their HQ in Virginia. They sent him to live in Northern Ohio for the entire year to spread the word about Hillary before the elections. I asked him who the NRA thought I should vote in the primaries based on their records. He said anybody on the Republican ticket you want, just don’t vote for Hillary.

I like also how they demonstrate how one can safely store a loaded gun in the home yet easily accessible in an emergency.

Don’t forget free speech. Hillary hates Citizens United and will makes sure its overturned and thereby opening the door to fully regulate and criminalize political speech.

“About two-thirds listed that reason for owning guns in 2015, The Trace reported, and handgun ownership has risen proportionally compared with rifles. That’s despite drops in violent crime over recent decades.”

HRC would pack the courts with justices that will rule that the 2nd Amendment is a “collective right” of the government to have a monopoly on firearms, guaranteed.

I think more realistically, in the shorter term, Heller and McDonald would be respected to some extent, but, rather, the standard of increased scrutiny that they require of laws potentially infringe the 2nd Amdt would be lowered to a smidgen above the rational basis required for non-fundamental rights. Already seen this somewhat with the 2nd (NY) and 3rd (NJ) Circuits.

The most disturbing thing about this video, is the comments on YouTube.

It’s not just ignorance of the facts, it’s willful ignorance.

by analogy, perhaps she would like to add poll taxes or literacy tests but not eliminate the right to vote

“A D.C. Court of Appeals case that held that the police do not owe a specific duty to provide police services to citizens based on the ‘PUBLIC DUTY DOCTRINE’. Do go to wikipedia and read the terrifying details of this police malfeasance case!

On the other hand, you may opt to protect yourself and your loved ones with a firearm.

Let’s put all the politics and BS aside. Let’s not talk about children, storage or training issues, safety issues, social or moral issues, etc, etc..

When you for the first time in your life, you have finally met a truly bad person or persons,who are intent on causing you or your family great bodily harm or even death, a firearm is the first thing you want to have handy.

I made this decision decades ago and make no apologies to anyone about it.

The Left is phobic of rights and responsibilities and the liberty they enable in a diverse (i.e. over 300 million people) society.

Huh, every year 1 in 300 Americans is aborted or cannibalized in the abortion industry and Planned Parenthood offices under the State-established Pro-Choice Church.

Nice to know my ILA donations are putting out good work.

It’s running now in Florida and is very powerful. The key point (beyond leaving citizens defenseless, of course) is the gun safe. The NRA is smart to stress this and to show that it believes gun safety is just as important as gun ownership and self defense.