Rasmea claims she suffered from PTSD when she lied on immigration applications, but doesn’t want to be examined except by her own expert. 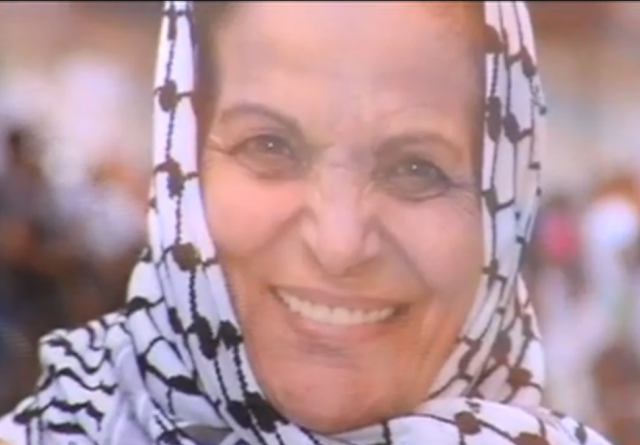 Rasmea was released in a prisoner exchange in 1979 for an Israeli soldier captured in Lebanon.

Rasmea was convicted of immigration fraud in federal court in Detroit in November 2014. She appealed, claiming the trial court improperly refused to hold a hearing on whether Rasmea could call an expert witness to testify that Rasmea suffered from PTSD based upon alleged torture by Israelis decades earlier. The theory advanced was that the PTSD caused Rasmea not to understand the simple questions about whether she “EVER” (bold, caps in original immigration form) had been convicted or imprisoned.

The government just filed a Reply Memorandum in further support of the motion (full embed at bottom of post):

The defendant’s opposition to the government’s request for a mental examination of the defendant is based on a mischaracterization of Federal Rule of Criminal Procedure 12.2, a misunderstanding of the extent of her Fifth Amendment rights, a misreading of applicable case law, and an exaggeration of the alleged harmful effects that a mental examination will have on the defendant – an exaggeration that is particularly disingenuous given that the defendant was able to be examined by her own expert for a period of 18 hours during the course of six sessions spanning a period of four months.

In response to Rasmea’s claim that any examination at any time by a government expert would cause her irreparable traumatic flashbacks, the government wrote:

The defendant contends that she should not be examined by a government expert under any circumstances because any examination would “plunge” her into “the depths of ghastly ‘flashback’ memories” of her alleged torture. (R. 203: Def. Opposition, PgID 2752). The defendant’s contention is undermined by the fact that it presupposes the existence of her PTSD – which is what the government wishes to examine. It is also undermined by the fact that the defendant is able to discuss her acts of terrorism and alleged torture in the media and elsewhere when it suits her. (R. 161: Government’s Sentencing Memorandum, PgID 1721-26). Moreover, the defendant was able to be examined by her own psychologist over six sessions, which were spread over a four month time period and totaled 18 hours in length. (R. 113: Evidentiary Hearing, Testimony of Mary Fabri, PgID 1163). The government’s motion seeks a comparable examination – one lasting two to three days.1 The fact that the defendant was able to sit for an examination by her own expert that was roughly the same duration as the examination requested by the government shows that her claims about plunging into the depths of ghastly
flashback memories is, at best, a gross exaggeration.

On the issue of whether such a mental examination would violate Rasmea’s Fifth Amendment right not to incriminate herself, the government pointed out that under Supreme Court precedent, Rasmea has waived such right by offering expert testimony based solely on what Rasmea told the expert:

The defendant asserts that an examination by the government would “violate a defendant’s Fifth Amendment rights.” (R. 203: Def. Opposition, PgID 2739). That argument has been squarely rejected by the Supreme Court and other courts. In Cheever, the Supreme Court held that a defendant does not have a Fifth Amendment right to preclude the government from introducing a psychological examination to rebut the defendant’s contention that a mental defect prevented her from committing the crime. 134 S.Ct. at 601. “Any other rule would undermine the adversarial process,” and would allow the defendant “through an expert operating as a proxy” to provide a “one-sided and potentially inaccurate view of his mental state at the time of the alleged crime.” Id.

Finally, as to Rasmea’s claim that a mental examination was permitted, if at all, only AFTER the court rules on whether the expert can testify, the government pointed out that the governing rules have no such requirement:

The Court will hear argument on the motion for mental examination on September 22.

As in the past, Rasmea’s supporters are organizing to “pack” the courtroom to support her. This is a tactic they used at the original trial so aggressively the Court issued orders of protection so that potential and selected jurors would not be influenced, Judge orders jurors protected from pro-Palestinian activists.

As a backdrop to the eventual hearing, keep in mind that Rasmea asserts that she only was convicted in Israel because she falsely confessed after 25 days of horrific sexual torture. In fact, records show she confessed just one day after arrest. (There also was substantial physical and corroborating evidence, she had legal counsel, and an International Red Cross representative in attendance at the trial termed it fair.)

Another aspect of the case is that the PTSD defense is an attempt at jury nullification — the hope that if a jury hears Rasmea’s testimony as to torture, the jury will disregard other evidence of the preposterous claim that Rasmea didn’t understand the word “EVER.”

Rasmea’s supporters even admit that they seek to turn the immigration fraud trial against Rasmea into a trial of Israel. As I previously reported, Rasmea is now a campus hero for anti-Israel groups, and has aligned herself with Black Lives Matter, The Sickening Deification of Rasmea Odeh

The expert testimony should not be allowed regardless of the mental examination. I’ve read the expert’s pretrial testimony, and even at face value it doesn’t meet the standard required. The expert does not say that PTSD caused Rasmea not to understand the questions on the immigration forms, or that Rasmea blocked out the memory. All the expert says is that it may have contributed — such speculation is not of sufficient scientific reliability. I’ll have more on this as we approach the November 29 hearing on whether the expert can testify.

But for now, we’re focused on the September 22 showdown over the mental examination.

How much money have we and the Israelis spent on this woman? She’s been convicted of killing two people. Let’s just be done with her already.

I can’t help but point out that if Israel had not released this creature and 77 other terrorists in exchange for an Israeli soldier none of this would be happening now.

She is trying very very hard to stay in the country that they call the great satan….. I wonder why??

So she can be used politically to incite, and encourage more naive youths to join the crusade.

So, being Muslim is a mental disorder now?

No – what will really happen when she’s given a psychiatric examination is that she’ll be Flashbacked into the were and trauma of murdering her innocent victims.