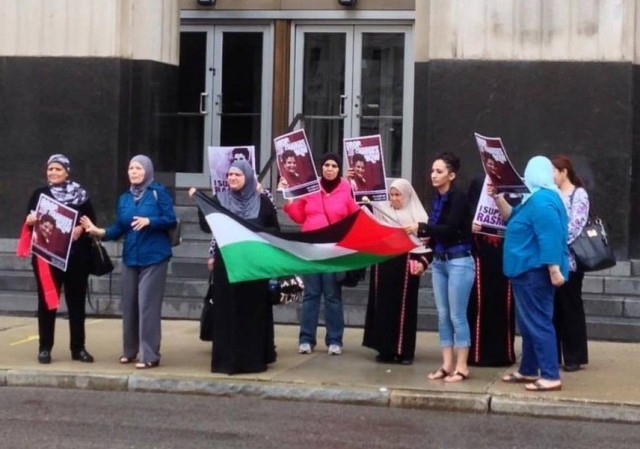 The trial of Rasmieh Odeh, an American citizen of Palestinian descent convicted in Israel decades ago of involvement in a terrorist group (the Popular Front for the Liberation of Palestine) that bombed a supermarket, starts in two weeks.

Odeh now denies involvement, claiming she was tortured and sexually humiliated into confessing by Israeli authorities. The documents regarding her conviction have been produced by Israel in the criminal case. The daughter of one of the bombing victims recounts the admissions by Odeh’s family members that seem to contradict Odeh’s claims of non-involvement:

Ayesha Oudeh, Rasmieh Yousef Odeh’s sister or “comrade,” has spoken about both of their involvement in the bombing at the Supersol in Jerusalem that killed my dad’s brother, Edward Joffe and his best friend, Leon Kanner. She has spoken about it in detail in front of cameras for all of us to see in the documentary Women in Struggle. Ayesha Oudeh even had a smirk when describing her clever plan. She said, “Rasmiyeh Odeh was more involved than I was [in the grocery store bombing] … I only got involved during the preparation of explosives. We wanted to place two bombs to blow up consecutively. I suggested to have the second bomb go off five or six minutes after the first bomb so that those who get killed in it would be members of the army and secret service, but it did not explode. They diffused it 20 seconds before it exploded.”The two women also planted two other bombs at the British Consulate in Jerusalem.One was found and detonated and the other only caused structural damage.

Odeh, now in the Chicago area, received some attention when it was learned she was an Obamacare navigator for a short while. But that’s not her current problem.

Odeh is charged with criminally failing to disclose her conviction and membership in PFLP when she applied for naturalization and obtained U.S. citizenship.  While Odeh is trying to put the merits of her original conviction in dispute, it’s not clear to me why that is relevant to the criminal charge — she was convicted and needed to disclose it.  As part of that disclosure, she could have explained why the conviction allegedly was unjust.

The case has become a cause célèbre with anti-Israel groups, with protesters loudly picketing outside the courthouse whenever there is a hearing. One of those groups, of which Odeh was a leader, is the Arab American Action Network.

With the trial coming up, one of the key organizers of the protests openly stated the plan to try to influence the jurors through protests and packing the courtroom. 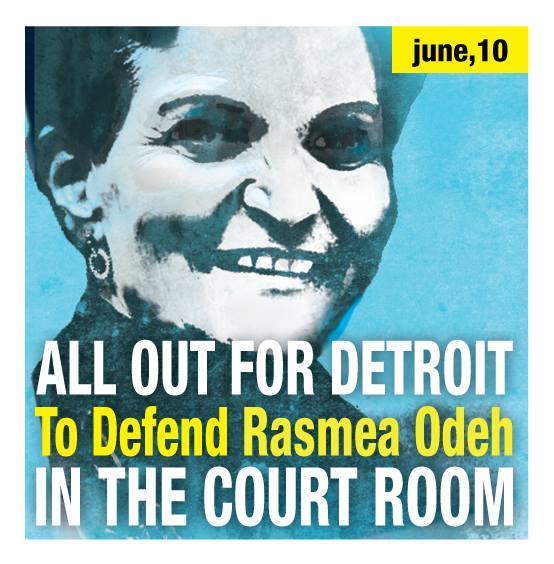 That led the government to seek both an anonymous jury and special protections for the jury such as meeting off-site and being transported by Marshalls to the courthouse. See our prior post for more details, Palestinian activist groups accused of attempting to influence jury.

The defense claimed, among other things, that special transportation measures would signal the jury that Odeh was a terrorist or dangerous.

Late yesterday the Judge granted the government’s request in part. (Full Opinion and Order are embedded at bottom of post.) The Judge denied the request for an anonymous jury as the legal standard required proof of threats by the defendant towards the jury or a history of trying to tamper with the jury by this defendant, of which there were none here.

But the Judge did grant the request for special procedures to transport the jury to the courthouse:

Accordingly, IT IS HEREBY ORDERED AND ADJUDGED:

(1) The United States Marshal Service shall make arrangements for off-site parking and for the daily transportation of the jurors selected to hear this case from a secure location to and from the
courthouse in vans furnished by Court Services and with gas paid for by Court Services. The jury
shall only be transported in a van that has its windows covered.

(3) The United States Marshal Service shall be responsible for maintaining order and decorum in the Courtroom and the Courthouse, including preventing loud or unusual noise that disrupts the trial proceedings or otherwise impedes the performance of official duties of any Government employees working in the Courthouse.

(4) The United States Marshal Service shall prevent any person from entering the Courthouse who is wearing or carrying any clothing, buttons, or other items that may be clearly visible to the jury that carry any message or symbol addressing the issues related to this case.

(5) The United States Marshal Service shall ensure that Defendant’s supporters who assemble outside the Courthouse comply with the City of Detroit’s Ordinance Sec. 36-1-1.

(6) All orders given by the Marshal or his deputies shall be deemed orders of this Court and must be complied with immediately.

The Judge also issued an Order against attempts to influence the jury through protests and courtroom conduct, including the following among several provisions:

IT IS HEREBY ORDERED that:

PROHIBITED. Contact with prospective jurors is strictly prohibited. No one may in any respect
attempt to or actually contact, interview, or communicate or speak with any prospective juror about the instant case nor that person’s status as a prospective juror until that juror has been excused from service on this case.

No one may in any respect attempt to or actually contact, interview, or communicate or speak with any of the jurors selected to decide this case about any issues in this action nor that person’s status as a juror until the trial has concluded.

No one observing the trial proceedings may attempt in any way to influence or intimidate any juror or prospective juror through any means, including wearing or carrying any clothing, buttons, or other items in the Courthouse that may be clearly visible to the jury that carry any message or symbol addressing the issues related to this case….

We will keep following this case.

Judge got serious. No playing in that courtroom.

Looking at the picture of those women with an enemy flag and no American flag, I can’t help but think that as part of the naturalization process, immigrants are required to take an oath:


I hereby declare, on oath, that I absolutely and entirely renounce and abjure all allegiance and fidelity to any foreign prince, potentate, state, or sovereignty, of whom or which I have heretofore been a subject or citizen; that I will support and defend the Constitution and laws of the United States of America against all enemies, foreign and domestic…

What are those POS terrorist supporters doing on American soil?

Why can’t we burn their stupid un-American flag like they do to ours?

Why don’t we revoke their residency and/or citizenship and put them in an airplane back to the hellhole they come from and to which they obviously still show allegiance?

Nice to see a Judge with their priorities straight and who deals with reality.