Claims she suffered from PTSD when she lied on immigration forms, but doesn’t want her medical claims challenged. 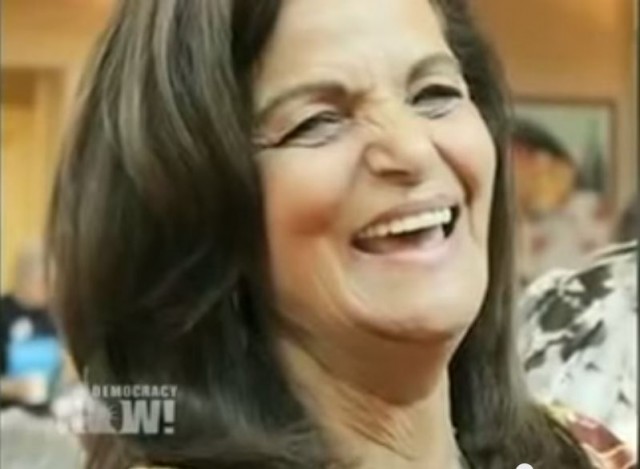 Rasmea was released in a prisoner exchange in 1979 for an Israeli soldier captured in Lebanon.

In 2014, Rasmea was convicted of immigration fraud. Rasmea has become a hero to the anti-Israel movement in the U.S., which falsely claims she confessed to the supermarket bombing only after 25 days of horrific sexual torture. In fact, the records show she confessed the day after arrest, there was substantial corroborating evidence, and she received a trial that an observer from the International Red Cross termed fair. Rasmea’s main co-conspirator has said in a video interview decades later that Rasmea was the mastermind. 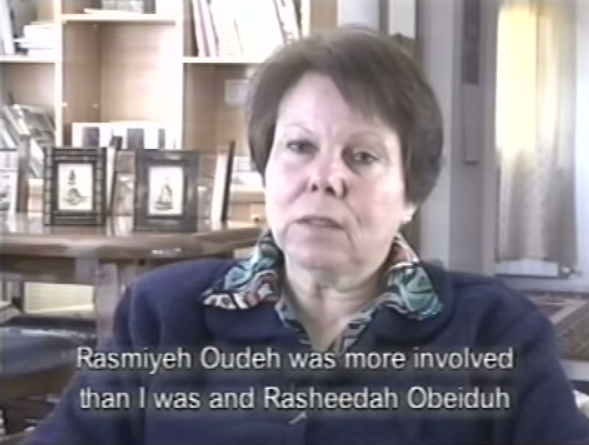 The Court of Appeals remanded the case (it did not overturn the conviction) for a hearing on whether Rasmea should have been permitted to call an expert to testify at trial that Rasmea suffered from PTSD such that she she didn’t understand the simple questions on the forms decades later about whether she “EVER” (caps and bold on form) had been convicted or served time in prison.

Earlier this month I wrote how Prosecutors seek mental examination of Rasmea Odeh as part of the preparation for the November 29 hearing. The prosecutors argued, among other things:

An examination by a government expert will also test the reliability and the competence of the defense expert’s testimony, and by extension, its admissibility under the standards set forth in Federal Rule of Evidence 702 and Daubert v. Merrell Dow Pharmaceuticals, Inc., 509 U.S. 579 (1993)…..

In Daubert, the Supreme Court held that Rule 702 requires that a district court act as a “gatekeeper” by ensuring that expert testimony which is unreliable, unsupported or speculative is kept from the jury.

Now Rasmea’s attorney’s have filed their opposition to the motion (full embed at bottom of post). The key argument is that a mental examination is premature at this stage of the proceeding and should be considered, if at all, only once the court determines to allow the expert testimony. Rasmea’s attorneys cite the language of Federal Rule of Criminal Procedure 12.2(c) which permits mental examinations where evidence of incompetency is introduced:

(4) Inadmissibility of a Defendant’s Statements. No statement made by a defendant in the course of any examination conducted under this rule (whether conducted with or without the defendant’s consent), no testimony by the expert based on the statement, and no other fruits of the statement may be admitted into evidence against the defendant in any criminal proceeding except on an issue regarding mental condition on which the defendant:
(A) has introduced evidence of incompetency or evidence requiring notice under Rule 12.2(a) or (b)(1), or
(B) has introduced expert evidence in a capital sentencing proceeding requiring notice under Rule 12.2(b)(2).

As a fallback position, Rasmea’s attorney argue that no mental examination should be allowed under any circumstance, even if the expert testifies, because it would traumatize Rasmea.

Here is an excerpt from the opposition papers:

On the face of it, information about an individual defendant like Ms. Odeh, which might be gained from a Rule 12.2(c) examination of her present mental state and PTSD condition, is flatly irrelevant to the issues raised by a Daubert challenge to her expert, who gave her the diagnosis, and would testify as part of defendant’s explanation of her state of mind at the time of the offense. The issue on the Daubert motion concerns the expert and her expertise, and the reliability of what she knows and what she says about PTSD, and torture, and about defendant’s case.

Defendant here also has strong and cogent reasons why no mental examination at all should be ordered in this case, chief among them being the grave risk that such a fundamentally adversarial interrogation – obviously designed to debunk her earnest PTSD defense – would gravely threaten a serious aggravation of her symptoms and the suffering they cause her. The possibility of such harm must be balanced against the very limited usefulness of such information, particularly where, as in this case, ample other materials are available to the
government to challenge Ms. Odeh’s defense at trial.

As a threshold matter, defendant submits that the request for a mental examination is altogether premature, at odds with the applicable Federal Rules, and should only be considered, if at all, after this Court has ruled that the testimony of defendant’s expert can be admitted and, accordingly, ordered a new trial.

The Appeals Court has already ruled that the expert testimony is potentially relevant, so the issue is whether it meets the test for reliability and scientific basis set forth in Federal Rule of Evidence 702 (emphasis added):

A witness who is qualified as an expert by knowledge, skill, experience, training, or education may testify in the form of an opinion or otherwise if:
(a) the expert’s scientific, technical, or other specialized knowledge will help the trier of fact to understand the evidence or to determine a fact in issue;
(b) the testimony is based on sufficient facts or data;
(c) the testimony is the product of reliable principles and methods; and
(d) the expert has reliably applied the principles and methods to the facts of the case.

As applied in the Daubert case (emphasis added):

The primary locus of this obligation is Rule 702, which clearly contemplates some degree of regulation of the subjects and theories about which an expert may testify. “If scientific, technical, or other specialized knowledge will assist the trier of fact to understand the evidence or to determine a fact in issue” an expert “may testify thereto.” (Emphasis added.) The subject of an expert’s testimony must be “scientific … knowledge.”8 The adjective “scientific” implies a grounding in the methods and procedures of science. Similarly, the word “knowledge” connotes more than subjective belief or unsupported speculation. The term “applies to any body of known facts or to any body of ideas inferred from such facts or accepted as truths on good grounds.” Webster’s Third New International Dictionary 1252 (1986). Of course, it would be unreasonable to conclude that the subject of scientific testimony must be “known” to a certainty; arguably, there are no certainties in science…. But, in order to qualify as “scientific knowledge,” an inference or assertion must be derived by the scientific method. Proposed testimony must be supported by appropriate validation—i.e., “good grounds,” based on what is known. In short, the requirement that an expert’s testimony pertain to “scientific knowledge” establishes a standard of evidentiary reliability.9 …..

Faced with a proffer of expert scientific testimony, then, the trial judge must determine at the outset, pursuant to Rule 104(a),10 whether the expert is proposing to testify to (1) scientific knowledge that (2) will assist the trier of fact to understand or determine a fact in issue.11 This entails a preliminary assessment of whether the reasoning or methodology underlying the testimony is scientifically valid and of whether that reasoning or methodology properly can be applied to the facts in issue….

To summarize: “General acceptance” is not a necessary precondition to the admissibility of scientific evidence under the Federal Rules of Evidence, but the Rules of Evidence—especially Rule 702—do assign to the trial judge the task of ensuring that an expert’s testimony both rests on a reliable foundation and is relevant to the task at hand. Pertinent evidence based on scientifically valid principles will satisfy those demands.

It is pretty clear under these standards that, in a particular case, the facts underlying the expert’s opinion may be subject to inquiry as to reliability. That is precisely what the prosecution seeks to do by examining Rasmea as to the reliability and veracity of what she told the expert. We know for a fact, for example, that Rasmea has not been truthful as to the timing of her confession, where she claims it was the product of 25 days of sexual torture but in fact she confessed the day after arrest.

Rule 702 specifically states that the testimony must be “based on sufficient facts or data.” That wording together with the language from the Daubert case quoted above, strongly suggests that factual inquiry can take place prior to the court ruling on whether expert testimony will be allowed.

As to Rule 12(c), that rule does not overrule the evidentiary standards for expert testimony, it only governs when statements obtained during a mental examination can be used against the defendant.

The prosecution has until August 8 to file its Reply papers responding to the opposition.

she is a terrorist. that she is kookoo is a given, she lied and therefore got residency and citizenship as a Taqiyah practicing hater of Jews.
Deport her to Israel, where she can be put back in jail, where she belongs!

Israel wouldn’t put her back in jail, because they already released her.

PTSD doesn’t work with the IRS.

Please, read PTSD for PSDT in my above comment.

Hopefully when she gets deported back to where ever, someone will really give her ptsd

Can we just skip the 18 months of the taxpayers feeding this pot bellied savage coward and get her out of here already.

She lied and cheated to get here. We now know the truth. Send her back to the hell she helped create.

Detonate a brick-sized charge of C-4 a safe distance (i.e., 18-24″) from the lady’s head and observe her reaction. If she starts wailing uncontrollably, she suffers from PTSD and should be released. If she doesn’t, send her back to Palestine, her shoulders to Lebanon, her thighs to Iran… Any questions?