Palestinian incitement is the core of the conflict, encouraged by BDS “anti-normalization” policy. 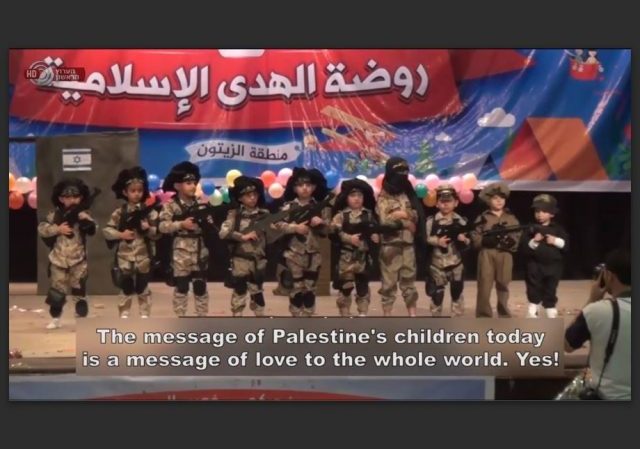 The core problem in the Israeli-Palestinian dispute is not “the occupation” of Judea and Samaria (the “West Bank”) or the lawful Israeli military blockade of Gaza to keep out Iranian armaments.

The problem, to which the Western world is just waking up, is the pervasive top-down and bottom-up incitement against Jews and Israel in Palestinian society in which even the youngest children are taught to hate Jews and to kill Jews by whatever means possible, including stabbing, shooting and ramming with cars: 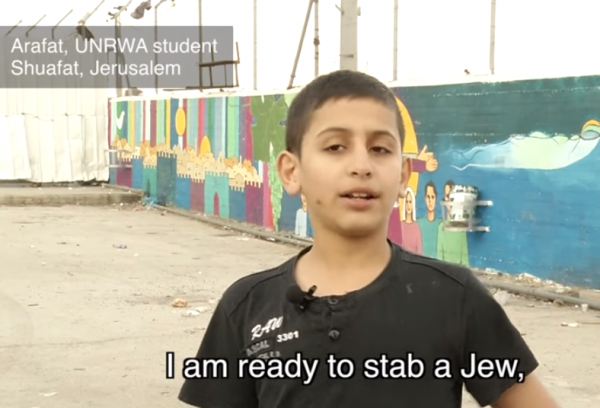 We have highlighted this problem for years, including these recent posts: 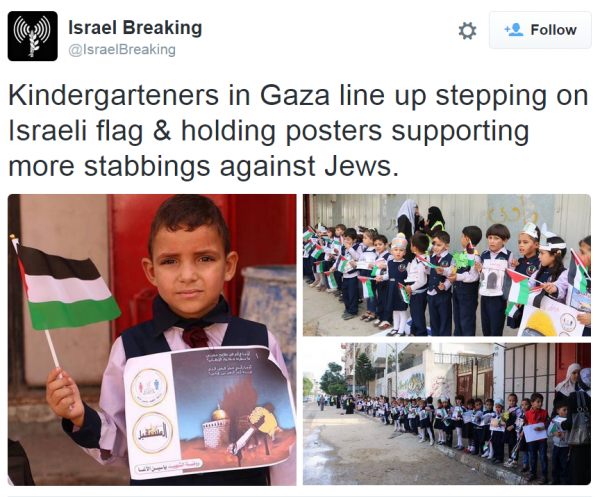 MEMRI has another recent example, Terror Show at a Gaza Kindergarten Graduation Ceremony; Islamic Jihad Leader to Israelis: We Are Not Terrorists, Don’t Force Us to Kill You, as reported below by Israeli TV (h/t @RedsWhinez Twitter):

The Boycott, Divestment and Sanctions (BDS) movement is a key part of this incitement, as it opposing any “normalization” between Israeli and Palestinian or other Arab youth:

Who could be against Israeli and Arab students learning to interact without guns or threat? Who would think fostering mutual understanding in the younger generation is a bad thing?

Who would boycott such a peaceful and peace-promoting project which is what the UCC claimed was its goal?

The Boycott, Divestment and Sanctions movement, that’s who.

As we reported in 2014, BDS Movement boycotts online peace discussions among Israeli and Arab youth:

The BDS fight against such peaceful gatherings of Israeli and Arab youth did not start in 2014. That BDS war against “normalization” started almost from the moment YaLa Young Leaders Conference was launched….

Any movement that calls itself pro-peace cannot be against peaceful reconciliation among young people.

But BDS is not a peace movement. It is war by other means, something its leadership and media sycophants understand quite well. 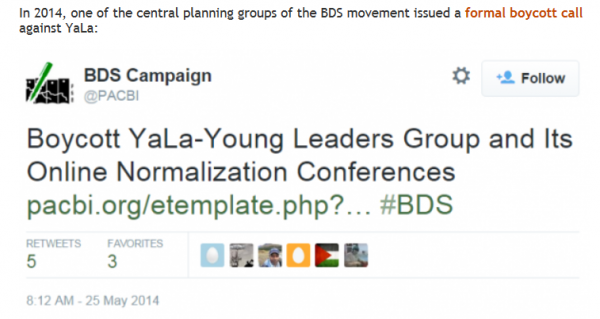 Palestinian incitement and the BDS movement, a deadly combination. It’s time to condemn both.

When you raise children to hate and kill, as with Imperial Japan, there are only two options.

Kill them or crush their belief system.

This incitement is not quite “Palestinian.” It needs to be understood as a Palestinian iteration of orthodox Islam and demonstrates why the religion is infinitely plastic–the role of the Main Kuffar can be assigned at anytime and anywhere to any non-Muslim. Jews work best for Pallys, Christians for Sunnis generally, Great Satans for some Shia, and so forth.

Former Israeli PM Golda Meir’s quote comes to mind: “Peace will come when the Arabs will love their children more than they hate us.”

But this will never occur until the malignant cancer of Islamism is erradicated from the earth.

There was a deadly drive-by shooting today near Hebron. Another solid contribution to peace in our time by the official religion of peace.

I think back to my children’s kindergarten performances, and I have to admit …

… they were quite boring in comparison to that crazy-a$$ed sh*t.

Do the mothers of these children actually love them, or do they just see them as cannon fodder whose martyrdom will bring fame and status to the family?

Where is the United Nations and all of the human-rights organizations on this child abuse?

That is some of the craziest crap I’ve ever seen.