UNRWA is a big part of the problem, and receives massive U.S. funding. 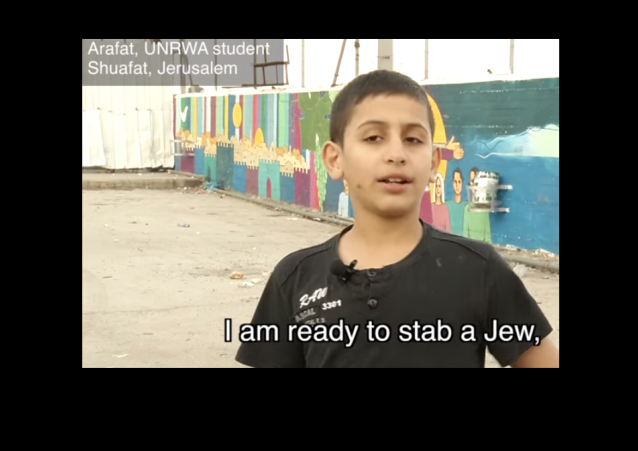 A newly released video expands on the problem of incitement.

The United Nations Relief and Works Agency for Palestine Refugees in the Near East (UNRWA) is notorious for helping to perpetuate the Middle East conflict, among other ways, by perpetuating the “refugee” status of Arab refugees created during the civil war and Arab invasion at the end of the British Mandate for Palestine. These refugees are unique in that other Arab countries refuse to integrate them or allow citizenship, while UNRWA uniquely counts even subsequent generations as “refugees.”

But UNRWA does much worse. It helps incite violence against and hatred of Jews through bigoted education. A recent film and study released (h/t Elder of Ziyon) demonstrates the problem, Filmmaker Calls for UNRWA ‘Self-Introspection’ Over Palestinian Classroom Incitement: 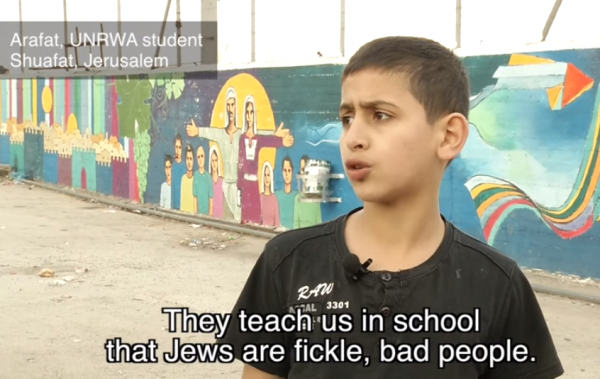 A newly released 10-minute online video produced by the Jerusalem-based Center for Near East Policy Research says that many of the Palestinians who have murdered Israelis during the so-called “stabbing intifada,” which began in September 2015, were educated in schools run by the United Nations Relief and Works Agency for Palestine Refugees in the Near East (UNRWA).

Titled “The UNRWA road to terror: Palestinian classroom incitement,” the video claims that the current wave of violence was not spontaneous, but rather has roots deriving “from an educational curriculum taught to Palestinians beginning in first grade.” …. 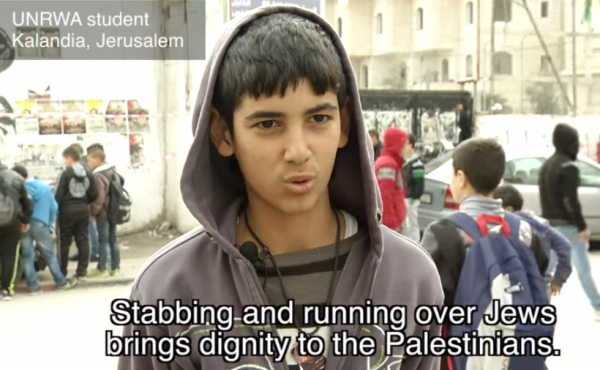 Much of this is funded by U.S. contributions to UNWRA

Documentary filmmaker David Bedein, director of the Center of Near East Policy Research, says that the UN member states who are the funders of UNRWA schools should be held accountable for the agency’s hate education. Bedein says that at the top of that list of funders is the United States — UNRWA’s largest donor, providing $400 million of the organization’s annual $1.2 billion budget…..

Asked why the Israeli Ministry of Education doesn’t get involved in stopping UNWRA’s incitement, Bedein says the ministry’s hands are tied and that it can’t interfere with UNRWA schools. He says that Israel’s Defense Ministry and Foreign Ministry, however, “could have a say in it but choose not to.”

This is generating some Congressional inquiry, though it remains to be see if any action is taken. The Jerusalem Post reports:

Members of the U.S. House of Representatives are investigating incitement to terrorism in the UN Relief and Works Agency schools, Rep. Doug Lamborn (CO) told The Jerusalem Post on Monday.

“Congress has been asking questions about UNRWA for years, and it is important that we continue to do so until we are sure that the curriculum used and the teaching the children receive does not poison their minds,” Lamborn said.

“Textbooks and other materials that delegitimize Israel, denigrate the Jewish people, promote the ‘right of return’ through violent struggle, and glorify martyrdom must be banned.”

Your tax dollars at work.

This incitement of children is why so many children, some as young as 12 and 13, have been involved in stabbing and stoning attacks.

So next time you hear anti-Israel groups complain about “children” being arrested, keep this in mind.

Why is the US funding the UN, clearly a terrorist organization?

Because the Obamas and Clintons of America find they are allies against American sovereignty, and the crying boehners of the GOPe are along for the ride.

Time to dry up the UN membership dues and charge the bastards through the nose for all that space they occupy in NY. Are we ready for a USUNEXIT?

It seems that this kind of nonsensical squandering of our taxpayer dollars happens again and again. Who needs an “investigation”? Who in our government is writing the checks for this disastrous idea, and WHY DON’T THEY STOP?!

It has always been my hope that some NYC Real Estate Developer would come along with a better use for the UN Eastside properties and kick the UN out of NYC for good. Send the United Nations to Gaza, Somalia, Syria, Eritrea or anywhere else the dictators and parasites can congregate without ever having to come to the shores of the USA.

Nuclear waste storage would be good. Don’t bother to move the UN.

This answers the question I raised in response to another article about UNRWA. At that time, I was wondering if the schools (as opposed to the local TV station and clerics) were the source of evil instruction. Now I see that there is evidence that the schools are indeed a source of incitement to murder.

Since when do we knowingly fund incitement to murder? Seriously, is this an appropriate use of American money?

Israel will never fall again. America will fall before it does, I stand with Israel.

“But UNRWA does much worse. It helps incite violence against and hatred of Jews through bigoted education.”

The narrative is supposed to be “Global Warming causes terrorism.” Our “betters” have told us so. We must fall in line or AGent Lynch will have our necks.