NYC Students for Justice in Palestine argues BDS movement controlled by big-money Western NGOs who serve their own needs. 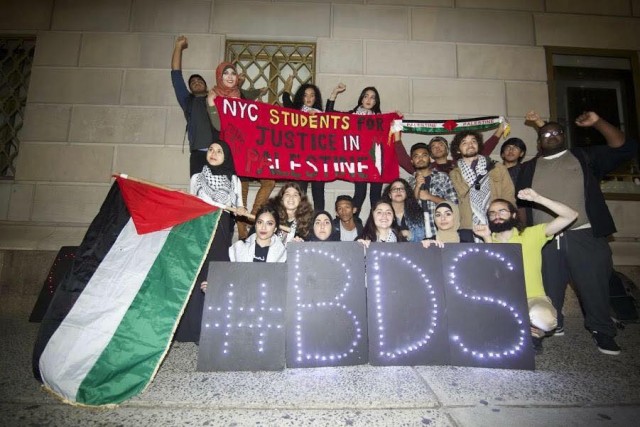 Students for Justice in Palestine (SJP) is the very aggressive national campus organization devoted to the destruction of Israel. SJP works mostly through campus-specific affiliates. We have highlighted here the antics of the Vassar, Cornell, Northeastern, Bowdoin and NYU chapters, among others.

SJP is part of the global Boycott, Divestment and Sanctions (BDS) movement, which popular propaganda says was a grassroots Palestinian civil society call issued in 2005. As we have documented, in fact BDS was launched with the help of anti-Semitic Non-Governmental Organizations (NGOs) assisted by Islamic governments at the 2001 Durban Conference.

Among the panoply of SJP groups is one not based at a specific campus. Calling itself New York City SJP (NYC SJP), the group formed in August.

The group members are no shrinking violets — they are as aggressive, if not more aggressive, than other SJP groups.

NYC SJP posts some of its protest videos on its Facebook page, including this recent demonstration.

NYC SJP not is the subject of attack not from pro-Israel groups, but from the central international BDS Movement itself for an analysis NYC SJP posted on its website. That analysis questioned the international and domestic BDS movement’s priorities and funding sources. 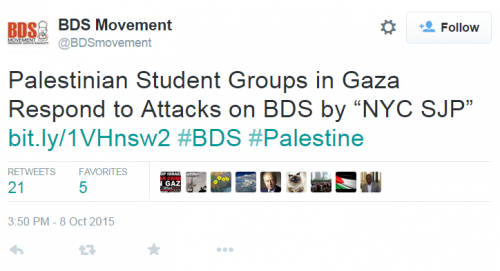 … The most disconcerting aspect of this article is that, despite its veneer of leftist rhetoric, it does a great disservice to those it purports to represent and be in solidarity with. Not only does the article misrepresent the BDS movement with false premises and ill-informed arguments, it also undermines our BDS efforts….

So what did NYC SJP do to incur the wrath of BDS central command? Call for compromise with Israel? Accept “normalization” of relations with Israeli youth? In some way ask BDS to scale back? 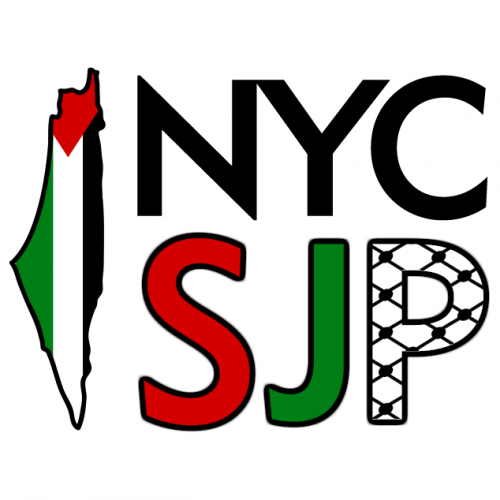 Rather, NYC SJP questioned the BDS movement’s money connections and the dominance of the movement by NGO’s beholden to Western donors, while much of the movements’ actions are exercises in futility promoted to make liberals feel good about themselves with no tangible effect on the ground.

The NYC SJP analysis is quite perceptive in parts. Here are some excerpts from NYC SJP’s analysis, The BDS Ceiling.

NYC SJP takes issue with the entire premise of the BDS movement, that boycotts against South Africa ended Apartheid and therefore serve as a model for eliminating Israel. (Put aside the completely false analogy.)

Often, the experience of international solidarity against apartheid South Africa is brought up in discussions on BDS and how we participate in the struggle against Zionism. This argument rests on the often-repeated myth that international sanctions and boycotts resulted in the fall of apartheid in South Africa. In fact, it was the mass movement of indigenous people led by the African National Congress who ended apartheid, not a international law body or economic sanction.

That analysis by NYC SJP is correct – BDS didn’t end Apartheid. It’s complete historical mythology, but it is the fabric of the BDS movement, used at the Durban Conference to issue the boycott call, and by countless anti-Israel groups to justify their existence.

Next, NYC SJP destroys another foundational myth of the BDS movement, the notion that BDS is lead by “Palestinian Civil Society” when, in fact, well-funded Western NGOs call the shots:

One reason that Boycott, Divestment and Sanctions is so widely celebrated and practiced by solidarity organizations is because it was called for by the seemingly monolithic “Palestinian Civil Society.” The uncritical acceptance of “Palestinian Civil Society” has mythologized the organizations who lend their name and resources to supporting the call for BDS, which has material effects that go far beyond BDS. This in itself is not the primary issue facing organizers in the US, although the NGO-ization of civil society has been written about in depth by a multitude of authors….

Within the Palestine solidarity movement in the United States, the term “Palestinian Civil Society” is invoked with such reverence and awe that one would be led to believe that “Civil Society” is in fact a monolith with consolidated theoretical understanding of the settler-colonial reality in Palestine, with a coherent strategy to not just petition internationals to boycott and divest, but to build power in Palestine to lead a revolutionary struggle against Zionism. In reality, the actors within Palestinian Civil Society with the loudest and most powerful voices are the NGOs with the biggest pockets filled by international aid money, distributed by politicians within the Palestinian Authority or by international organizations themselves.

What has happened, NYC SJP argues, is that the goal of Palestinian rights and national achievement has taken a back seat to the liberal fetishes of Western NGOs:

Having questioned the foundation and control of the international BDS movement, NYC SJP then zeros in on the stupid, futile gestures engaged in by the movement, particularly in the United States as part of “divestment” campaigns:

Many divestment campaigns have passed through student referendums and student government resolutions, but all but a few have been purely symbolic. No actual divestment, and no real boycotts against israeli universities have been established, except by a handful of academic associations like the American Studies Association. Practically, if every israeli produce company was thrown out of U.S. markets tomorrow, what material effect would it have on the struggle for Palestinian national liberation? While successful at raising political consciousness, organizing for BDS as the ceiling of our work has proved to be little more than a revolving door, churning out similar petitions and events each semester with little to no focus on escalation or movement building in general.

Among the futile gestures are the attempts to tie the Palestinian struggle to the struggle of other groups — much like the BDS movement in the U.S. and SJP National focus on trying to hijack the Black Lives Matter movement under banners such as “Ferguson to Palestine,” and so on.

On campus, repeating the same events and handing out the same flyer on its own will not advance the movement or our analysis of the Palestinian struggle. When participating in united fronts and coalitions with other progressive student organizations, BDS can provide an anti-Zionist, anti-imperialist lens with which to view a collective goal of the student movement. For years, the topic of connecting struggles has been on the tongues of Palestine solidarity organizers around the world. This usually materializes in a panel discussion, a workshop, or joint cultural nights.

Last, but certainly not least, NYC SJP questions whether the movement is turning into one big NGO which exists for itself:

If we do not continuously question and revise our overall strategy with guiding principles that go beyond the BDS demands, we risk becoming an NGO masquerading as an anti-imperialist solidarity organization.

No wonder the international BDS central command is furious.

NYC SJP — which still supports the BDS movement — has destroyed the foundational myths of the movement, its structure, and its developing loyalty to the emotional well-being of Western NGOs and donors.

NYC SJP has correctly diagnosed what amounts to the equivalent of an international money laundering machine which funnels donor money to Western NGOS in the name of the Palestinian cause. Those NGOs — much like the Palestinian Authority — serve up jobs and who knows what else to a vast bureaucracy with little accountability.

UPDATE 10-9-2015 — This is interesting. One of the Gaza student groups listed in the BDS Movement post has withdrawn its name from the attack on NYC SJP, citing a need for unity against Israel:

The following statement of clarification was issued by the Progressive Student Labor Front in the Gaza Strip, in regards to a statement issued on 8 October bearing signatures from Palestinian student organizations in Gaza. The PSLF is listed as the “Progressive Student Work Front” on that statement. The PSLF withdraws its signature to that statement, and is engaged in dialogue with other Palestinian student organizations in regards to this matter. It emphasizes the importance of unity in the movement – which can only be obtained through open political dialogue on the Palestinian national liberation movement on the Palestinian, Arab and international levels. The PSLF’s statement is below: ….

Tellingly, hard line anti-Israel U.S. activist Ali Abunimah, whose Electronic Intifada reportedly has been the recipient of European money and who is part of the fabric of the international NGO movement directly or indirectly, sides against NYC SJP:

NYC SJP hit a nerve – the power structure of the BDS movement that earns its livelihood off the BDS and Divestment industry.

“We have no practical effect, because the only things we can get away with are purely symbolic gestures that nobody cares about. We need to link up with the drum circles, puppet guys, and nekkid bike riders.”

Are we to assume that there is a natural progression from BDS (Bush Derangement Syndrome) and BDS (Boycott, Divestment and Sanctions) ?

It’s almost like we need a clearing house for TLA’s (Three Letter Acronyms).

Every time I see “BDS” my mind automatically appends an “M”.

On the other hand, Prof, here’s a bumper sticker for your collection.

Thank you for keeping the dots connected on this for us (well, for me at least).

It would be nice if LI ran a few articles about Israeli products which can be bought is the US. Tell us how good they are and where we can buy them. This can offset BDS a bit. I got money to spend. For instance, when I was in Israel a couple of years ago, I had goose breast, medium rare. It’s to die for. It’s a popular Israeli product. Can you get it here? If so, I will make somebody rich.

That’s a good idea. We’ve done it in the past, but would be good to do it again. This image has a bunch of companies, http://www.israellycool.com/wordpress/wp-content/uploads/buycott-poster-front.jpg